Robert L. Anderson, Emeritus Dean of the USF Muma College of Business, passed away at age 82 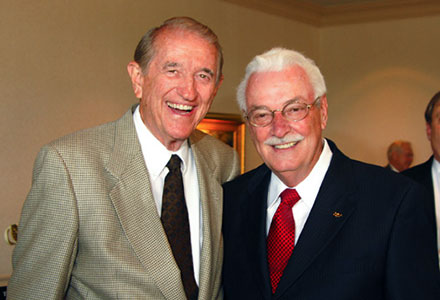 TAMPA -- Robert L. Anderson, Emeritus Dean, Muma College of Business, University of South Florida, passed away on October 31, 2022. He was born October 30, 1940, in Blue Island, Illinois to George Anderson and Alberta Brookfelt. In 1963, he married “his bride”, Donna. They were sophomores in college. Together, they lived a life of challenges, adventure and laughter. Bob was a man of commitment, first to his family, second to academia, and third to his community.

As a young man, Bob worked the blast furnace of a steel mill. After meeting Donna, he had an ultimatum: get an education or forget about marrying Donna. He enrolled at Southern Illinois University (SIU) where he peeled potatoes and cleaned dorms to pay for his education. Once there he said, “I can’t believe people get paid to learn and be on a college campus.”

He earned his Bachelor of Science in Financial Management in 1965. When Donna asked, “When are you going to get a job?” he said, “I would like one more degree.” He then earned a Master of Science in Marketing from SIU while working as assistant to the dean. When again asked if he was going to look for a job, he said, “I would like a PhD!” Off they went to Texas where Bob earned a PhD at the University of North Texas. He never again left a college campus.

Bob joined the faculty of the University of South Florida Muma College of Business in 1971. In 1989, he was named associate dean for graduate studies and research and in 1995 was named dean. He led the college until 2006, seeing the college expand from one building to two. The “new” building was a great accomplishment requiring collaborative fundraising by the business community, faculty and alumni. He guided the college through several Association to Advance Collegiate Schools of Business (AACSB) accreditation visits and through periods of significant growth of faculty and students. 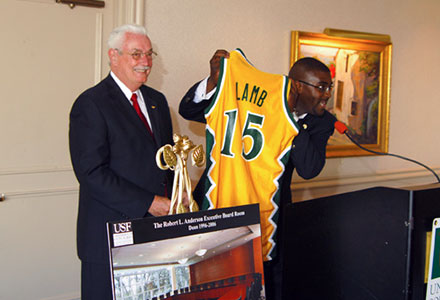 After retiring from the college in 2006, he did not stay away from academia for long. He joined the faculty on the Sarasota-Manatee campus in 2008 and was the founding dean of the Muma College of Business for that campus in 2010.  He guided the school through its first accreditation by the AACSB, achieved by only 5% of business schools in the world.  He retired in 2014 after spending a total of 43 years of his career at USF.

Bob’s commitment to academics was closely linked to his commitment to the community. During his tenure, he sought to build community partnerships leading to his participation on boards including the Committee of 100, Chamber of Commerce, Co-chairman of the I-4 Economic Development Committee and Co-chair of the Hillsborough County Education Committee. Most of all, he enjoyed helping businesses and professionals network. He believed the university should follow the model used by Stanford University to make Silicon Valley a success in which companies are identified and university expertise is used to nurture and help the businesses grow. He wanted a vibrant, active business community where business graduates have career opportunities and would remain in Tampa.

Bob’s longest and most satisfying community commitment was to University Community Hospital now Advent Health. Ken Lightfoot brought him onto the board of University Community Hospital in 1987. This became a high priority with him for 35 years. He served as Chairman of the Board from 2002 to 2012 until the merger with Advent Health. He continued to serve as chairman of the operating board of Advent Health Medical Center, Tampa until he became ill in August 2021. He was as committed to the hospital as he was to academia and was proud of the hospital’s growth both in size and services. He truly loved the hospital and the friendships made there throughout the years.

Finally, Bob’s greatest love and commitment was to his family. His world revolved around Donna, Michael, Stacy, Donna’s brother Ron and Nada. He managed and coached Michael’s Little League team. He sponsored the youth group at church and the door was always open for any child or teen who needed to talk or spend the night. In 1995, the family grew when Stacy married William (Billy) Peek. They added George, William, Christina and Robert. All four grandchildren added years of joy watching them play their sports, grow and achieve.

With Donna, there always was laughter and adventure. They briefly lived in Paris, Mexico and Wales as part of Bob’s academic role. They also lived in Irpin, Ukraine following the collapse of the Soviet Union as part of the International Executive Service Core. Yes, life was a grand adventure which included fishing, golfing, scuba diving, white water rafting and a hot air balloon ride (once).

Bob lived a life filled with satisfaction and joy. He will be remembered as not only a gentleman but as a gentle man. 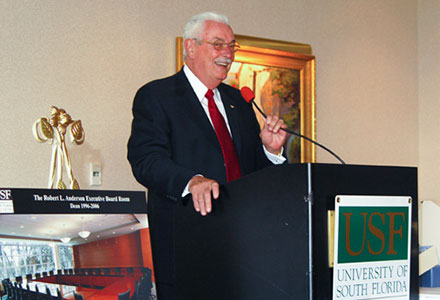 The family will be forever grateful to Dr. Michael Newton, pulmonologist, for his kind and constant care. He and his staff, including Denise and Lea, helped us through a difficult year. In addition, we extend our heartfelt gratitude to Dr. Sharona Ross and Advent Health Tampa, including the staff of the emergency room, Pepin Heart Center and 4 South. We are grateful to the staff and board of the Monte Carlo Towers who provided kindness and assistance. Finally, we thank Lifepath Hospice (Burgundy Team) in particular, Christi for her nursing care and Chip for their loving guidance. With hospice, you never feel alone.

For those who would like to attend, there will be a service for Bob at noon on Nov. 26 at Christ the King, 821 South Dale Mabry Hwy, Tampa. This will be followed immediately by “A Celebration of Life” from 2 – 4 p.m. at Blount and Curry, 605 S. MacDill Ave. Tampa.