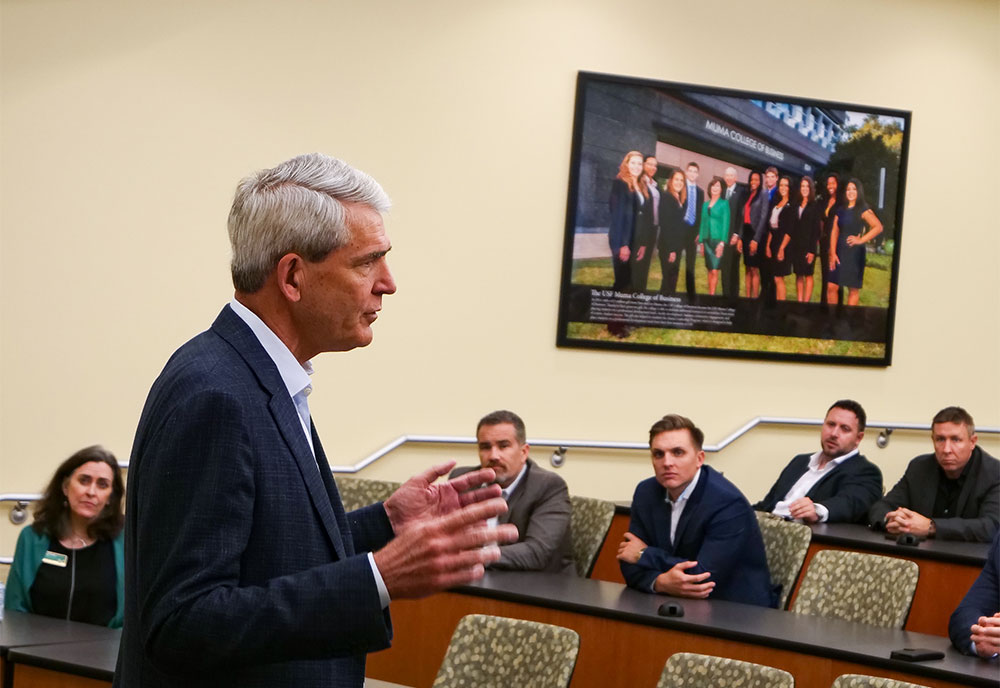 TAMPA – Paul Reilly, CEO of Raymond James Financial, says he asks himself every day whether he’s making a difference in his job.

“If I’m not making a difference, someone else needs to be, because the firm deserves it,” he said.

Reilly was the featured speaker at the Nov. 4 Distinguished Speaker Series at the USF Muma College of Business where about 35 Executive MBA students listened as Reilly shared lessons from his decades-long career as a business executive.

He advised students to do those extra things to really make a difference — things that help the firm, but also get them noticed by leaders.

“Not only do I think it makes a job more rewarding, but I think you get rewarded for that, too.” 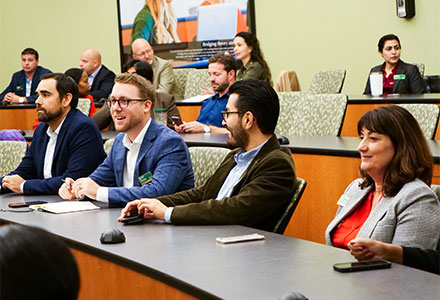 Reilly admitted that throughout his career, he wasn’t always the top pick to fill an opening nor was he the most experienced.

“It’s all been about relationships and developing relationships and trust,” he said. “I think in so many businesses today people think the only way to get ahead is to show that you’re better or to beat out the person next to you. I believe I got those leadership positions because people trusted me. Building trust and doing the right things at the right time, I believe, pay off.”

On his most difficult decision he faced in his professional life, Reilly said it was having to lay off a third of the workforce when he was at Korn/Ferry International. Reilly began his tenure with Korn/Ferry International as chairman and CEO in 2001. From July 2007 to April 2009, he was executive chairman of the talent management solutions company.

“There are certain places that think of people as numbers, but I think of them as people, human beings, families,” he said.

On what he looks for in a leader, Reilly said, “I look for people who are self-starters, who can work with people and not only hold themselves accountable, but people who work for them accountable. I look to people who can hopefully take my job or certainly a much bigger job and they have the values to treat other people well.” 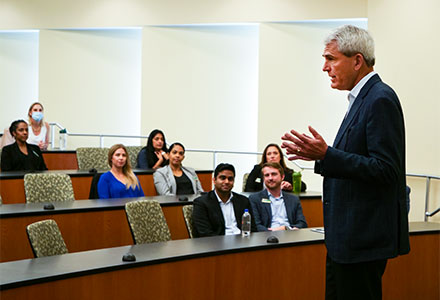 Prior to Korn/Ferry, Reilly was CEO at KPMG International. Before being named CEO at KPMG, he ran the firm’s financial services business and earlier had held senior management positions in its real estate consulting group.

Reilly earned his bachelor’s degree and MBA from the University of Notre Dame, where he received the Distinguished Alumnus Award in 2004-2005. He also holds the Certified Public Accountant designation.

USF’s Executive MBA program is among the best in the nation. Fortune released its “Best Executive MBA Programs” rankings list for 2023 and placed USF in the No. 29 spot. The Muma College of Business program also took the No. 18 spot among public universities and the No. 1 spot in Florida.