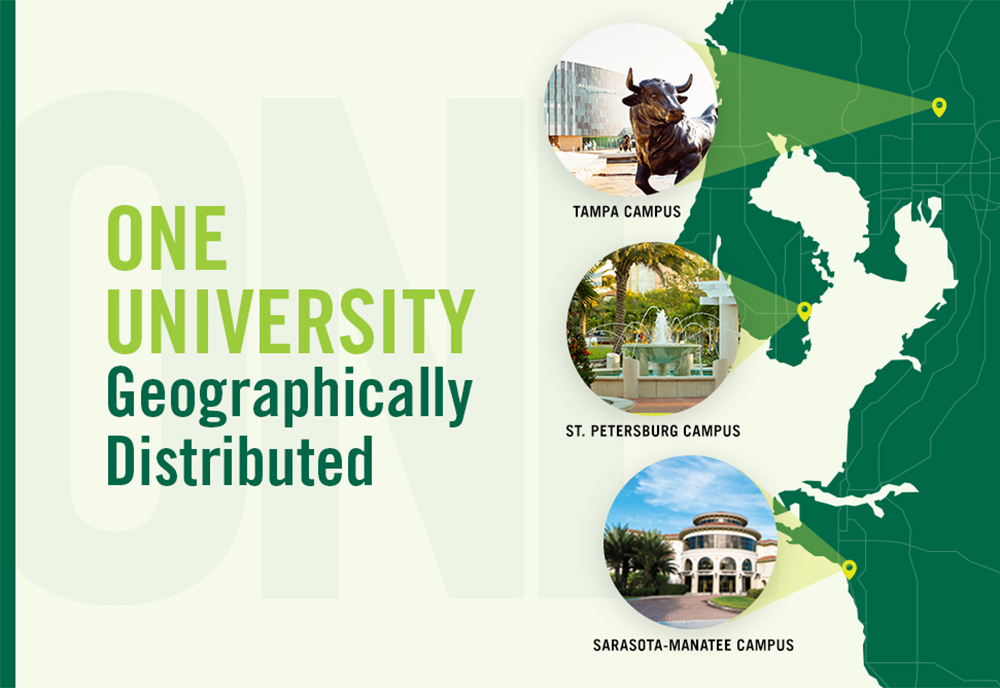 Perspective: Consolidation Expands the Impact of USF Research and Innovation

* This is part of a series authored by leaders with varying perspectives on the benefits of USF being "One University Geographically Distributed."

Consolidation of the University of South Florida’s three campuses is an extraordinary opportunity to build upon our growth as a leading center of research and innovation and to expand the benefits of our high-impact efforts to all corners of the Tampa Bay Region.

Consolidation opens new avenues for more faculty to work together on interdisciplinary research projects and expands USF’s strong culture of innovation deeper into our communities. The synergy that can be created through working together in research and innovation could be one of our most defining characteristics as an institution and create more powerful results than what we might have accomplished individually.

In recent years, we have seen cross-campus collaboration set the stage for research and innovation success. For example, the USF Research Strategic Plan – the first of its kind in Florida, which went on to become a model embraced by our fellow public research universities – was created through the efforts of faculty, department chairs, and deans on all three campuses.

Just recently, the National Science Foundation awarded USF St. Petersburg funding to support The Florida Alliance for Graduate Education and the Professoriate, an effort whose goal is to support doctoral, post-doctoral, and early-career minority women in the fields of science, technology, engineering, and math on their campuses. The grant grew out of the successful Research BootCamp that has been held at the Tampa campus for several years. The project is a game-changer, not just for USF but the four other Florida universities who have joined in this effort.

Key entities that guide research at USF – the Research Advisory Committee, the Associate Deans for Research, and the Faculty Senate Research Council – all include representatives from all three campuses.

We are fortunate that the Tampa Bay Region also offers great diversity through its geographic distribution in one of the fastest-growing metropolitan regions of the United States, which serves us well when it comes to interdisciplinary projects that dig deep into the issues and challenges shaping our modern world.

The consolidation plan calls for USF St. Petersburg and USF Sarasota-Manatee to become the home of centers of excellence in oceanographic and environmental sciences and STEM education and aging studies, respectively. Invariably, those research programs will give rise to new inventions and innovations. Successful efforts such as the National Science Foundation’s I-Corps program – which trains faculty and students on how to take an idea from the lab to market – couldn’t be more suited for expansion in St. Petersburg and Sarasota-Manatee as both those communities increasingly look to grow their innovation districts.

The recent study from the Washington Economics Group reported USF’s innovation enterprise – which is comprised of the USF Research Park, the incubator, the Office of Patents & Licensing and the Office of Corporate Partnerships – sustains more than 4,000 public and private sector jobs (an increase of 35% from 2016) statewide, and returns more than $71 million in tax revenue to local, state and federal coffers (an increase of 37% since 2016). We are proud that this enterprise creates an estimated annual impact of $548 million across Florida. As distinctive programs and centers of excellence in St. Petersburg and Sarasota-Manatee develop amid this strong culture of innovation, those economic benefits will grow alongside them.

USF’s Office of Corporate Partnerships continues to open new connections between the campuses and the private sector in multifaceted research and education partnerships, such as the new USF Jabil Innovation Institute announced recently. Our students are the big winners in these experiential learning efforts that are critical for moving our talented graduates into jobs that drive the wider Tampa Bay economy forward.

Almost half of the metrics in preeminence are related to research, and one of the advantages of consolidation is that when we come together as one institution, our metrics will be counted as one research university. Over time, the combined achievements of all three campuses will move us closer to USF’s goal of becoming Florida’s next AAU university.

Our mission has been – and will continue to be – ensuring that faculty, students, and staff are successful in their research and innovation ambitions. Now more than ever, our shared future is boundless.