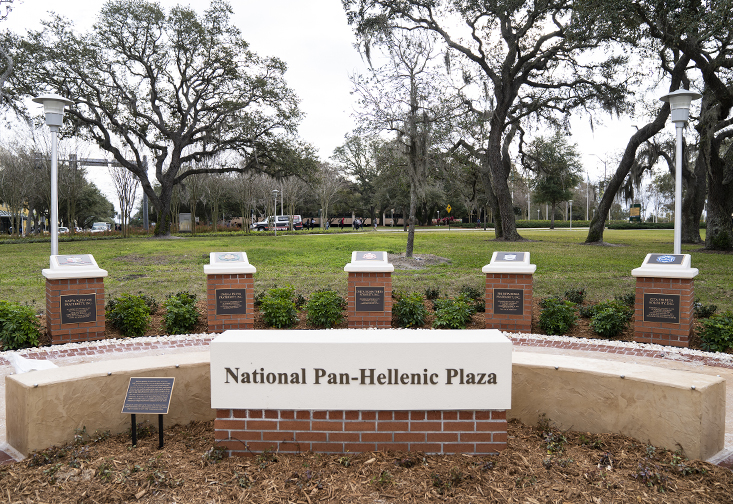 The University of South Florida will officially unveil a new National Pan-Hellenic Council (NPHC) Commemorative Plaza during a ribbon cutting ceremony on campus this week. The plaza features nine plots with elevated plaques, which represent each of the historically black Greek-letter organizations that comprise the governing NPHC. USF is the only Preeminent institution in the state and the first non-Historically Black College in Florida with this type of physical representation.

“The University of South Florida System has always been proud to be a place that is open and inclusive to students from a broad range of backgrounds, especially those from underrepresented populations,” said USF System President Judy Genshaft. “Our diversity makes us stronger, as our community is enriched with a wider range of perspectives, experiences and ideas.” The USF NPHC Commemorative Plaza will serve as a welcoming space for a time of reflection or to meet with friends, and is open to students, faculty, staff, alumni and the public. It also aims to celebrate and honor the achievements of NPHC members, along with their contributions to educational institutions and communities. The NPHC use plots as a symbolic representation of their belonging to campuses across the nation.

In addition to the USF NPHC, several other university organizations were involved in the plaza’s development, including Student Government and the Mobilizing the Dream Initiative, a collaboration between students and administrators designed to facilitate dialogue about diversity issues on campus related to the black student experience.

“It makes me feel proud that we now have this new space. The process has been years in the making and it’s not only an achievement for the NPHC, but for all of the black students on campus,” said USF NPHC President Jamal Robinson. “On a national level, historically our sororities and fraternities fought for equality and recognition in a collegiate space such as this one. This project shows that those strives were not in vain.”

According to The Education Trust, USF is the number-one school in Florida and sixth best in the country for black student success. In recent years, USF has also received national recognition for eliminating the achievement gap by race, ethnicity and socioeconomic status, a rare achievement in higher education.

The USF NPHC Commemorative Plaza is located in between the USF Federal Credit Union and the USF Post Office.