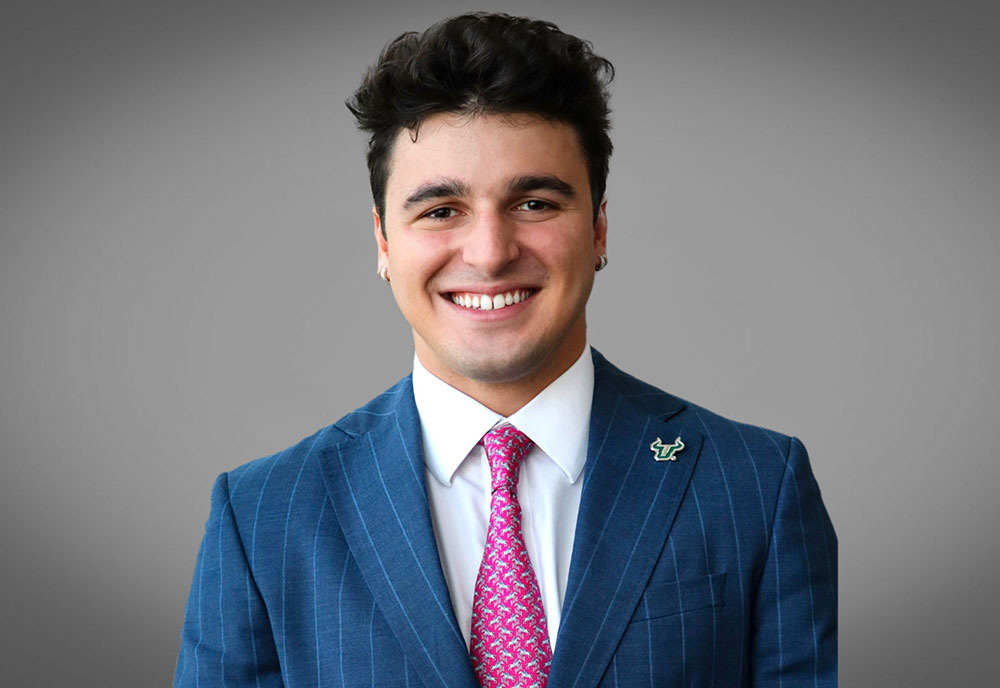 TAMPA – University of South Florida finance student Gabriel Mocelin landed his dream internship and is headed to New York this summer to learn from the best at Goldman Sachs.

For an international student double majoring in finance and econometrics and quantitative economics, this coveted spot in the sales and trading division at the investment banking stalwart’s global headquarters is huge.

So big that Mocelin never imagined the opportunity was even possible when he arrived in the U.S. from Brazil at age 15, not knowing a single person and only knowing the basics of English.

He came to America with one mission in mind: to be the best that he could be in the things that he loves, which happened to be basketball at the time. That’s how his journey began in the U.S.

When he started classes at USF, he knew little about the finance industry or how to best prepare himself for a career in finance.

“As I began my journey at USF, I noticed that…I was not the smartest or the one who read (the) most books, and I had to accept who I (was) to move forward,” he said.

Mocelin thought about how he could set himself up for success and remembered how in high school, he was chosen to be captain of the basketball team not for his technical skills, but for his values as a team player and as a leader.

That change in mindset led him to join many organizations at USF. He credits his involvement in campus student life to his success.

Two clubs have been influential and are closest to his heart — the student Investment Club and the Brazilian Student Association. Today, Mocelin is president of both organizations. He leads about 70 executive board members and connects with around 2,000 general body members among both.

Additionally, for the past year, he has served as a private equity/credit intern at Star Mountain Capital in Tampa.

Mocelin said he’s learned a lot and come a long way since being a first-year student at USF. He remembers preparing a list of more than 20 questions to ask the then-president of the Investment Club as a way to explore his interest in finance.

The list of questions ranged from which classes to take to companies that would sponsor international students. Mocelin said the list, and its answers, continues to be a resource for him and he plans to continue passing the help and information forward.

“My mission is to positively impact and inspire the greatest number of students for the longest time possible,” he said.

Mocelin’s involvement in the Investment club brings him much pride.

“I wanted to be part of something that can change students’ lives and that is what the investment club did to me and so many others,” Mocelin says. He mentions that as president of USF’s biggest student organization, seeing the impact involvement has made in its members and the Tampa Bay area is “immensely rewarding”.

Mocelin stays connected to his roots by surrounding himself with the tight-knit Brazilian community on campus known as BRASA at USF, which is the largest chapter internationally.

As the club’s current president, he loves to talk to members and connect with members over their shared colorful culture.

“Listening to freshmen who flew from Brazil tell me their top school of choice is USF because of BRASA and their dream to be a part of it someday gives me chills everytime,” he said.

The gratification of having a positive effect on student experiences is something he is eager to continue through his professional career. With USF’s encouragement, students like Mocelin are able to grow, evolve, and feel welcomed in new chapters of their lives.

“The support of the Muma College of Business towards the organizations that I am part of has been fantastic and I am extremely happy to see the growth of the university over the coming years. I will be forever proud to be a Bull,” he said.