Tampa, FL (May 15, 2015) It's said a journey of a thousand miles begins with one step, but for Lora Crider it was a set of steps that pushed her to make a change.

"I was feeling bad, no energy, wanted to go home, eat, lay on the couch, watch TV and then I had a hard time making it up one flight of stairs without being out of breath," said Crider, an Administrative Specialist in the Dean's Office at the USF College of Education. 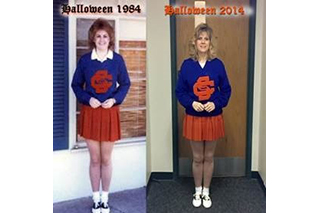 After more than two decades sitting behind a desk, poor eating habits and a lack of exercise Crider's weight had ballooned from the 143 pounds she weighed in her 20's to almost 300 pounds. She began an amazing weight loss journey that culminates with an appearance on NBC's Today Show. She'll be featured during "The Joy Fit Club" segment on Monday, May 18.

"I finally said, 'I'm way too young for this,' and talked to doctor friend that recommended a stress test," said Crider. "For me that was the kiss of death. In my heart of hearts, I knew I was in serious trouble."

Crider started Weight Watchers online in January of 2013 and began tracking what she was eating. She bought a food scale to measure portions, but she also realized she didn't have a bodyweight scale. She didn't want to know her actual weight, and even asked doctors not to tell her when weighed. Crider was shocked by her weight when she stepped on the scale for the first time.

"I had underestimated my weight by about 30 pounds," said Crider. "I didn't do any exercise until I lost the first 30 pounds, then I started walking."

By August of 2013 Crider had dropped 50 pounds. That same month she joined the USF Fit Program, for the third time.

"I decided this time I'm really going to be diligent," said Crider. "There was more seriousness to it because I was trying to not have a health issue." 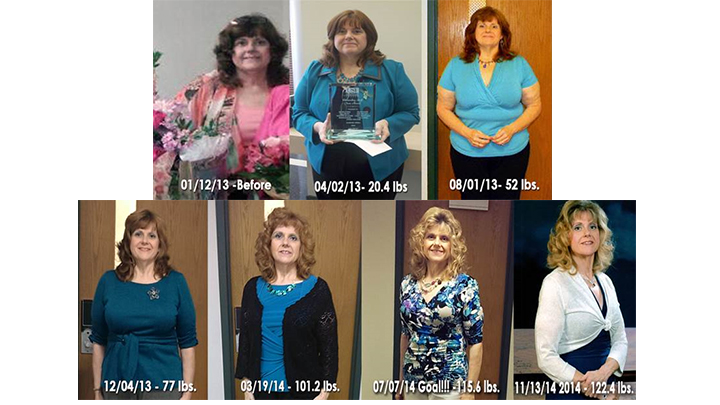 She focused on core exercises and weight lifting to build strength. By early 2014 Crider had lost a total of 100 pounds. Throughout the whole process she kept the goals small and manageable.

"I never looked at the big picture," said Crider. "This is the one thing I think a lot of people make the mistake, including myself, you think, 'I have a hundred and some-odd pounds to lose,' it's a hopeless case. In my case, I just focused on five pounds. As soon as I lost that, I focused on another five pounds."

Another small goal was beginning the process of replacing unhealthy snacks with fruits and vegetables.

"My desk looks like a little vegetable and fruit market," said Crider. "And it's cheaper than going to the snack machine and buying candy bars, cookies and chips."

Crider also started sharing her experiences with an e-newsletter to help keep her focused. She later started a blog to share her weight loss experiences with a wider audience. In July of 2014 Crider reached her original Weight Watchers goal of dropping 115 pounds. She then decided to try and get back to what she weighed in her early 20's. This past April Crider reached that goal and had worked her way down to 135 pounds. She lost more than half her bodyweight. That inspired her to send her photos to People Magazine and the Today Show, she was nervous about revealing her current weight and what she weighed at her heaviest, but she didn't expect to get a response.

"At least I did it, nothing negates the fact that I've lost half my bodyweight," said Crider. "And it's made me get over the fear of the numbers getting out there by submitting it. That was a big victory by itself."

But the Today Show did call and after exchanging calls and emails with producers, Crider was booked to be a part of Joy Bauer's Fit Club, which celebrates people who have lost more than 100 pounds. And Crider has a lot to celebrate, she's made a complete lifestyle change to not only lose weight, but to keep it off and be healthier. She now walks three-to-six miles every day with her rescued Labrador named Sunny.

The stairs that were so difficult to climb now serve as a regular reminder of her accomplishment when attending USF Weight Watchers meetings she coordinates. She participated in the USF Fit Program for a fourth time in the fall of 2014, and for the first time weight loss was not the focus. Crider also has kept her one indulgence; a weekly lunch of fried chicken at KFC. 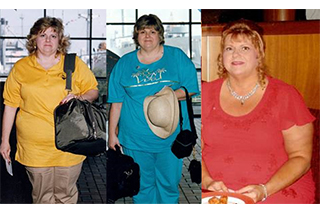 "That's the big treat of the week, I won't give up my Kentucky Fried Chicken" said Crider. "That's what I think is wonderful about Weight Watchers, you can eat real food."

Crider now uses old photos, previously exiled to a box in the back of a closet and ignored, as motivation to stick with her goals.

She's gone from a size 20 to a size 4/6, and had to replace her wardrobe a few times throughout the process. She did keep one pair of pants and can now stand in just one leg.

"They remind me how I don't want to go back there, and they show me how far I've come," said Crider. "Now they're kind of cherished mementos versus things you just hide, its empowering."
Crider now wants to help as many people as possible reach their individual health and fitness goals. You can read Lora's blog and see past newsletters here: https://tampaflgal.wordpress.com/