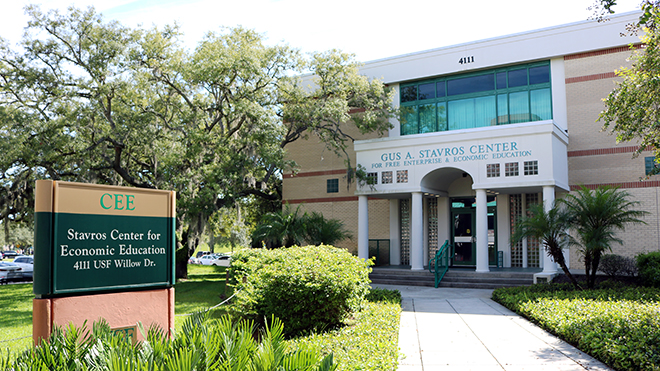 The Mona Lisa. Designs for a chariot with scythes to cut off the legs of enemy troops. An intricate analysis of how the human eye perceives light.

These were some of the many diverse achievements of Leonardo da Vinci.

Da Vinci, and the Italy of his time were center stage for a workshop in April titled "Leonardo da Vinci: Creative Genius in a Consumer Culture." The workshop was hosted by the Gus A. Stavros Center for Free Enterprise and Economic Education, a center housed in the USF College of Education that works to advance the effective teaching and integration of free enterprise, financial literacy, and economic education into the K-20 curricula.

The workshop, led by BB&T Master Teacher Educator David Scott, explored the birth of the Renaissance period in Italy and the special circumstances that allowed for the emergence of a consumer culture — a culture with an economy that is focused on the selling of goods and spending of money.

Teachers in attendance looked at art from the time period, which mixed religious imagery with images of consumer products and was designed to show the high status of those who commissioned the painting.

When credit and interest, staples of building a high-functioning economy, were able to enter the Italian economy, the economy and subsequent consumer culture flourished, and wealthy families bought luxury items from talented people, Scott said.

"If you were good at something, you could sell it to them," Scott said.

One of those talented people selling their expertise and art to rich Italians was da Vinci. Da Vinci was a man with boundless curiosity. His designs and interests stretched across many platforms, from art to medicine to engineering. He took his ideas and he drew them to life.

Da Vinci trained under an artist. He was not an engineer or a doctor. Scott stressed that da Vinci's knowledge of other subjects came from his constant inquiry and observational research and he asked the teachers in attendance if they encouraged this active inquiry and exploration using all senses when teaching their students.

Attendees found knowledge as well through the information provided in the workshop. Sherry Williams, an exceptional student education teacher in grades 3-5 at Rubles Elementary School has attended previous Stavros Center workshops in the past. She said she enjoys taking the information she gets from the workshops and modifying it for her classroom because she doesn't have a scripted curriculum like some other teachers.

"If I can weave something in to pique the interest of the students, then that's great to get them going in a different mindset," Williams said.

Experimentation was also an important lesson to be learned during da Vinci's time. To illustrate his point, Scott gave the example of da Vinci coming up with a new type of plaster in order to take his time on his fresco of "The Last Supper." However, this plaster was brittle and moisture that penetrated it led to the painting's vast deterioration over time.

"Sometimes we're too smart for our own good," Scott said.

Innovation comes with failure, Scott said, and it is important to acknowledge failures and teach students not to be afraid of them in their own work.

Juan Esparra, a tenth-grade world history teacher at North Port High School, said the workshop gave him the resources to provide his students with a background about the history and why people make the decisions they do. The workshop, he said, will add a new aspect and perspective to his teaching.

"Money makes the world go round, and it's kind of hard to show that when all you have are pictures and a book," Esparra said.

Scott said he thinks teachers can help their students use the economy to their benefit for their own creative endeavors.

"Leonardo da Vinci was a product as well as a producer of the Renaissance," Scott said. "Without the economic development of trade, finance and a consumer culture, Leonardo's creative genius may have gone unappreciated and undeveloped.

"Today's teachers have the opportunity to help their students understand the workings and benefits of a free enterprise economy, which provides incentives to develop greater creativity. As students learn to apply their creative genius, they produce greater value for society as a whole and greater success for themselves as individuals."

About the Gus A. Stavros Center for Free Enterprise and Economic Education:

The Gus A. Stavros Center for Free Enterprise and Economic Education works to advance the effective teaching and integration of free enterprise, financial literacy and economic education into the K-20 curricula.