(Tampa, Fla., May 2, 2017) — When first posed the question of how terms like urban, rural and suburban were used in science education literature, USF College of Education doctoral student Frederick Bradley thought, "So what?" 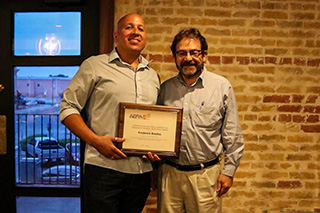 Now — after spending a year researching and publishing — Bradley's presenting his work on the subject, and was the recipient of a Student Research Award from the American Educational Research Association (AERA) Science and Teaching Learning Special Interest Group.

Bradley said he has realized there was more to the question that his mentor, College of Education faculty member Dr. Allan Feldman, posed to him than he first thought.

"It went from me kind of questioning, 'All right, why are we even doing this?' to having gone through this whole process and now getting to discuss everything I've learned and why it's important to me, and people actually care," Bradley said.

Feldman, a faculty member in the College of Education, was working on a project to develop climate change curriculum with high schools in Hillsborough County. When surveying students about what they would do to help climate change, students in both rural and urban schools listed public transportation as the transportation option they least wanted to use.

The question became how the term "urban" was being used in education. Bradley came aboard to continue the research with the assistance of two undergraduate interns, Javier Arias and Stephanie Baumann.

Bradley said they combed through literature to try to find how references to "urban," "rural," and "suburban" populations were being used. After investigating the topic further, Bradley said some of the terms weren't defined, with some missing entirely.
"What we found was in a majority, like a vast majority of the articles the only term you could find was urban," he said. "You couldn't find suburban or rural."

He also began to look at usage not only in science literature but in education literature as a whole, and he began to see patterns develop.

Bradley worked on developing a framework for the evaluation of how terms such as urban, suburban and rural are used in science education literature, defining them as explicitly defined, implicitly defined or not defined at all. 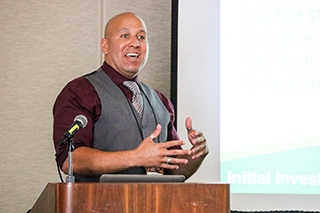 Since then Bradley has gone on to a more broad examination of the literature. In his research, Bradley found some interesting themes and parallels that show terms are used in the normalization of certain groups, such the theme of holding suburban as the standard to which urban schools are compared. In literature used in science education classes, a lot of times students see the term "urban" associated with other keywords such as marginalization, struggling, single-parent homes and poverty, Bradley said.

"It was as if 'urban' was serving as a proxy for all of those conditions," Bradley said. "But, when they would talk about 'rural,' yes, they would talk about poverty, but race wasn't brought up nearly as much. The angle or the lens viewed on those learning situations didn't seem to cast the participants in such a desperate light when compared to the urban students, schools, etc."
Bradley said he would like to continue to shed light on the discourse taking place with the use of these terms in science education literature.

"I feel like it's important to be accurate and mindful of how we use these terms and how we characterize things in science education literature because I always think back to, as scientists, where else would we just use some term as a proxy without really defining what it means," he said. "But the literature is (loaded) with the use of these terms, often times without any characterization or definition at all."

Bradley said he also feels examining these inaccuracies is important in a pedagogical sense.

"If this research is to form our theories, which are meant to inform our practice if there are these deep-seated flaws in our research or this deep-seated social disconnect in our research, it can't help but be continued to play out in classrooms," he said.