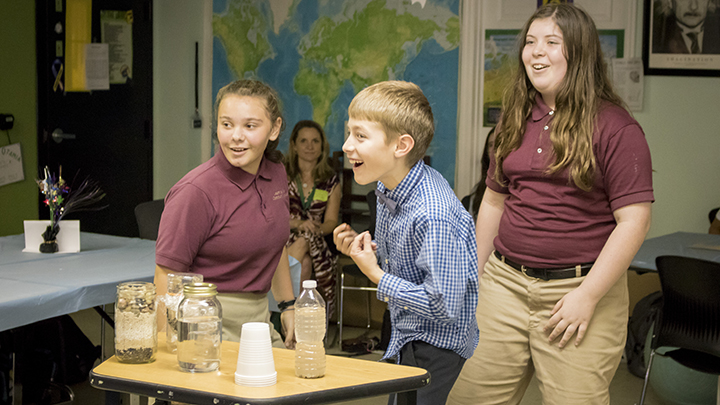 A group of students in Kara Windish’s 6th grade class pitch their invention to the “Sharks” — a homemade water filter to be used indoors. Each invention or idea the students created had to serve as an innovation during the earliest known civilization of Mesopotamia, ancient Sumer.

As they prepared for the big pitch, some were curious to step up to the plate.

“I’ve never done something as big as this project before,” said Sophia, one of the students presenting her invention.

For one week each semester, Windish— a 2006 graduate of USF’s Social Science Education program— places students into teams to create a product that would be useful in the year 5000 BC. From introduction to completion of the chapter, groups of students are given class time to develop their ideas, construct a model and combine their efforts into a business pitch similar to that of ABC’s television series, Shark Tank.

The business pitches are presented back to back as part of a “Sumerian Shark Tank” event, an activity that Windish said her students look forward to all semester.

“Originally for this lesson I had students do commercial pitches for ancient Sumer, the earliest known civilization of Mesopotamia,” she said. “One night I was watching Shark Tank, then I got this idea.”

As students settled in, the attention in the room shifted to the “Shark” investors—five of Windish’s students who roleplay what it’s like to make their own investments as aspiring entrepreneurs. The student Sharks are given a fixed salary to make smart and limited investments that they must calculate before making a possible deal.

As a first introduction to the business world, Windish was adamant that this project help students cultivate their strategies in hopes to incite promising future entrepreneurs and investors.

“I made sure to have time to work with each student individually,” Windish said. “I have them pitch me, then I give them feedback—the practicing and rehearsing is really important.” 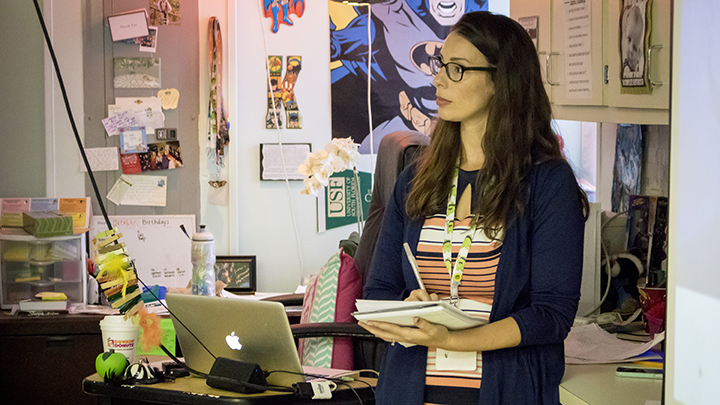 College of Education alumna Kara Windish, `06, watches her students as some pitch their inventions and others make investment decisions during the class’s Sumerian Shark Tank project.

Last year’s event caught the eye of USF instructor Deborah Kozdras, PhD, who serves as Chief Creative Officer for the Gus A. Stavros Center for Free Enterprise and Economic Education. The Center’s work revolves around inspiring students to become financially literate and to have a passion for entrepreneurship. Windish’s curriculum fits right in with that mission in a creative way, Kozdras said.

“The students think of new ideas, create something to solve a world’s problem, then promote it in the form of a business plan— from the think tank, to the Shark Tank,” Kozdras said.

To share with other educators the success of Windish’s work, she and Kozdras presented about the project at the Florida Council for Social Studies’ Annual Conference in October. Kozdras said the presentation was well received by teachers who never thought to incorporate business and history into their classroom lessons.

“There is nothing I have seen in education that engages students more than when kids play business and use the problem-solving, collaboration and communications skills most valued by the workforce,” Kozdras said. 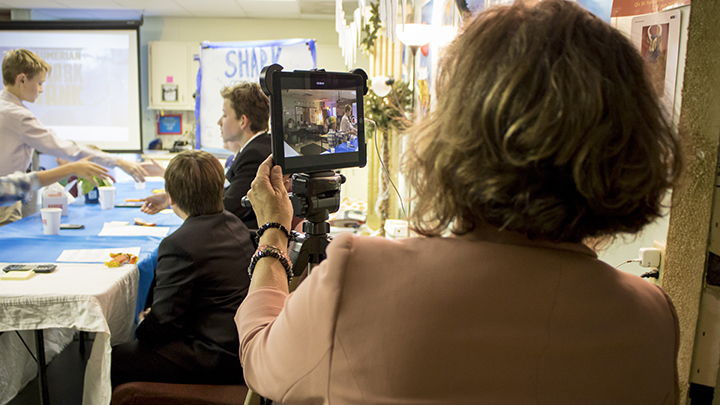 USF instructor and Chief Creative Officer for the Gus A. Stavros Center for Free Enterprise and Economic Education, Deborah Kozdras, PhD, films the lesson as part of a presentation about the project for a state-wide conference on social studies education.

Kozdras was blown away by Windish’s commitment to her immersive projects.

“What impressed me most about Kara is that she is really in it for the kids,” said Kozdras. “She is teaching to engage the curiosity of kids and get them to learn… I don’t know if she knows how much she sparks that curiosity in them by the things she does.”

While preparing the students for the mock event, episodes of Shark Tank were shown for students to reference. Windish said she knows one of the entrepreneurs who secured a deal on an episode of Shark Tank with investor Mark Cuban and that she hopes to invite them to visit her classroom to speak with her students.

“I want to show the kids that anybody can do this,” she said.

Inspired, the students committed to their products to make prototypes such as baked treats for a sweets shop in ancient Sumer, protective footwear and a water filtration system.

One of the students, Eric, constructed a homemade water filter to be used indoors with hopes to construct an additional fire purification process. He passionately explained to the Sharks what sparked his idea and how he wants to modify his invention to make it fully functioning. 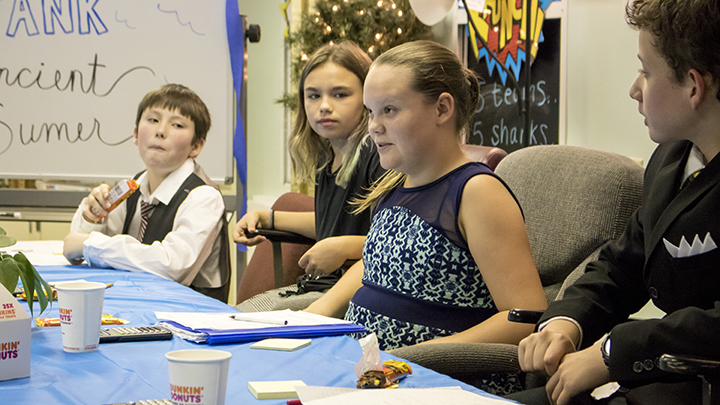 Some of the students in Windish’s class serve as the “Sharks” – investors who not only provide feedback to their classmates about their pitches, but who also make investment offers for the businesses they like the most. The Sharks are given a fixed salary to make smart and limited investments that they must calculate before offering a possible deal.

“Ms. Kara showed us an example of a Sumerian colony with a polluted stream,” he said. “A water filter with charcoal and sand, we expanded off of that with different kinds of layered rocks.”

Windish said she plans for the next event to explore the Chinese Silk Road chapter. As one of her favorite activities of the school year, she said she cannot wait to see how students will react to the next one.

“Next year I’ll probably think of 10 other things to add,” Windish said. “It just keeps getting better and better.”