Fitting the World Inside of a Classroom

Doctoral student Nicholas Bardo teaches in Guatemala, the second country he volunteered in during his five years in the Peace Corps. Photo courtesy of Nicholas Bardo

When Nicholas Bardo was fresh out of Brown University with his bachelor's degree in 2003, he was a different person.

He had just finished his degree in history and soon after he began his career as a social studies teacher in New Hampshire. After teaching for a few years, he realized he wanted to do more, see the world, learn new things and meet new people. His father had been in the Peace Corps at one time, so Bardo decided to follow in his footsteps.

"This sense of wonder and curiosity is what drew me," Bardo said. "Through immersion abroad, you not only can learn quite a bit from others and alternative ways of viewing knowledge, but you can also reflect on life in the United States from the vantage point of someone else. This process of reflection may help one find meaning that they may not have seen before, and this for me is a draw that I did not see at the beginning, but one that was more valuable than anything I could have anticipated."

This began a five-year journey across the globe that culminated in a passion for global education and led Bardo to pursue his doctoral studies at USF.

Bardo began his Peace Corps travels in 2006 in the Republic of Kiribati, a small island nation in the Pacific Ocean between Hawaii and Australia. Current CIA records document the population at just over 108,000 people. Bardo lived on an outer island, teaching at Junior Secondary School on the island of Nonouti.

"We didn't have electricity," he said. "We didn't have running water, so it was definitely a new way to think about many things that I took for granted perhaps, that I didn't even come close to considering before."

It would be the first of many shifts in perspective Bardo would experience in his travels. He spent a year and a half in Kiribati before the Peace Corps program there was suspended. Bardo said the problem was the plane used to transport volunteers and connect islands was often broken and unreliable. The only other way to travel was a two-week cargo ship ride. Ultimately, this inability to reliably transport volunteers spelled the end of the program in 2007.

Following the conclusion of his program, Bardo was given two choices: return to the U.S. or continue in the Peace Corps. He chose the latter and continued his global journey.

In 2007, Bardo moved to Huehuetenango, Guatemala, to an area with mostly indigenous peoples, again working in a middle school called El Portrerillo School. This time he also served also as a project manager with Semillas de Ayuda, a small nongovernmental organization. This change of scenery made Bardo pause yet again for reflection.

"In Guatemala ... there is profound poverty," he said. "They deal with a lot of issues that are related to general security issues, and that was an eye-opener as well. It made me reflect again on how fortunate I was to be from the United States."

After two years in Guatemala, Bardo considered returning to teach in the U.S., but his search for a position was unsuccessful. So, when another Peace Corps opportunity was presented to him, this time in China, he took the offer.

In 2009, Bardo moved to a city called Liupanshui in Guizhou province. It was a city of about 3 million people centered around coal mining. Bardo worked as an instructor at Liupanshui Normal College, a teaching college in the province. It was during this term of Peace Corps service that he met his wife, Joanelle Morales, who was also serving in Peace Corps. Today, the two are both graduate students in the College of Education.

When Bardo's time in China came to an end in 2010, he was on the verge of expat status, having spent five years in the Peace Corps. He and Morales moved to Hawaii. Bardo began teaching again at Sacred Hearts Academy in Honolulu, and something about his middle school students didn't sit well with him. His students had little knowledge of parts of the world that existed beyond the U.S.

"I returned to the classroom in Hawaii, and I immediately was astounded by the lack of global understanding and contextualizing people's education within a broader, global context," he said.

Bardo wanted his students to grasp more profound concepts and expand their global awareness. He also observed a particular phenomenon in education.

From this observation, he posed a question: "How do you show people, how do you have them come to their own conclusions about making choices that are in their best interest?"

To help answer this question, Bardo decided to continue his own education. In 2012, he started his master's degree in cross-cultural and international education at Bowling Green State University. Then, in 2014, he decided to pursue a Ph.D. in curriculum and instruction from USF, finding a mentor in faculty member Bárbara Cruz, Ph.D., who shares Bardo's passion for global education. 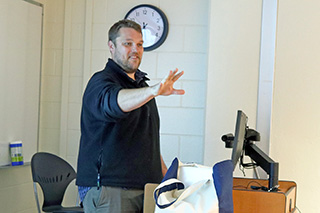 Bardo teaches an evening class in the College of Education on global perspectives in education. Photo by Elizabeth Engasser

"From the very, very beginning that I first met him I knew that he was a very special student and a very special teacher, and it proved to be true," Cruz said. "I've had him in class as my student, and now I have the privilege of directing his dissertation."

In the College of Education, Bardo is highly involved. He is the program coordinator for the USF Tutor-A-Bull program and teaches a global perspectives in education course. Cruz said he is a well-received teacher among the students in the college.

"One of my favorite lines is 'He makes our brains hurt, but in a good way,' and I think that really sums it up," Cruz said. "He makes them think deeply and seriously about issues that face not just education and schooling, but also the world at large, and that's really magical."

Issues such as international tensions, ethnic conflicts, environmental conflicts, all have solutions with roots in cultural understanding. Everything that Bardo does shows a passion for global education, Cruz said. 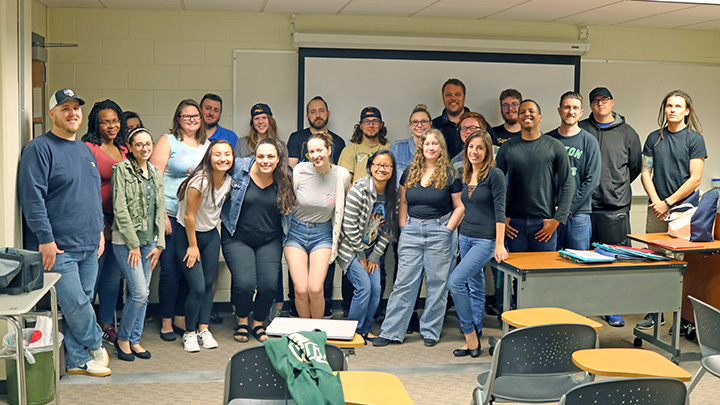 Bardo says when completes his Ph.D. he aspires to continue his work in higher education. He also wants to mentor individuals who are planning to teach abroad. He said he feels the biggest obstacle and fear for those hoping to teach from a global perspective is a fear of the unknown and of stepping into unfamiliar territory.

"A lot of people don't want to be seen as not being aware or being called out - perhaps about not knowing something, and so there's self-censorship that goes on," he said. "It takes the form of just following the textbook curriculum because this is a defined knowledge base that can be engaged with easily and is a safe place of comfortability."

But in global education, Bardo said, there isn't a prescribed knowledge base to lean on and there are so many unknowns when it comes to things like resources, cultures and perspectives. Global education opens up many possibilities and many perspectives across the world and various ways to think about how knowledge is constructed.

The fact that people are afraid to talk about and engage with subjects they don't have much knowledge about speaks to discomfort and fear associated with change and the unknown. The process of adjusting one's way of thinking is tough, Bardo said, as it was for him when he first started his time in the Peace Corps.

"We all come with our own assumptions about values ... and sort of seeing another contrasting and baffling set of values or of knowledge can be discomforting and in conflict with what we think is right," Bardo said. "For us to step back and really think about where our own values and our own understandings of knowledge come from is a process of digging deeper into our own understanding. Doing this, one can perhaps picture where somebody else might be coming from as well."

After overcoming these fears, Bardo was able to observe a change in himself. He said he also found himself changing as he went through his doctoral program. That feeling of dissonance he experienced, and how it can be simulated, is the focus of Bardo's dissertation research.

"In terms of doctoral studies, for each new theorist, perspective, or body of research one uncovers it provides a new way to view my role as a human, a citizen, and a teacher," Bardo said. "The experiences enrich one another, and my experiences with the Peace Corps inform my research and pedagogical worldview. It is also humbling because both of these experiences showed me just how little I know or could possibly ever know given the breadth of human experiences and educational research -- but at the same time this revelation serves as a challenge that drives my curiosity to continue learning."