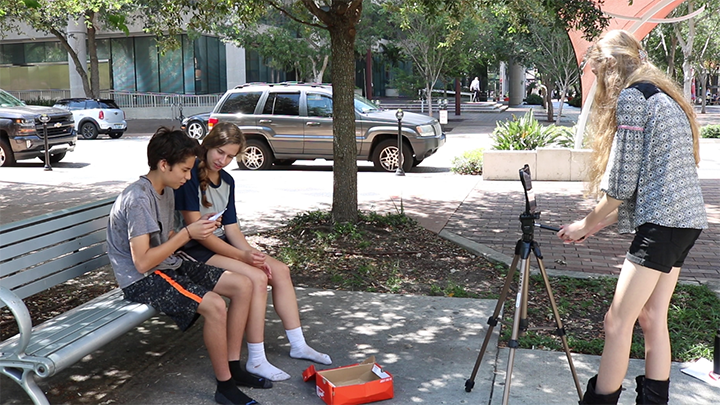 A student group rehearses and films a scene for their movie outside the Tampa Theatre.

TAMPA, Fla. (July 17, 2018) – Below the brick walls and green marquee of the historic Tampa Theatre, a high schooler gazes up at the roof. A small group of other students stand in front of him with an iPad and a photography reflector, filling the shadows under his face with sunlight.

Inside a dressing room of the theatre, a student plays dead while another dressed as a detective examines his fake blood and bruises through a magnifying glass.

For these teams of students, every space inside and around the theatre is a new, creative opportunity to learn filmmaking skills and discover what it takes to make a movie of their own.

So far, more than 110 students in grades 3-12 have spent a collective three weeks at the Tampa Theatre learning the process of digital filmmaking during the theatre’s 15th annual summer film camp. The program will continue another two weeks up to the last Saturday of July.

Led by camp counselors and staff from the College of Education’s Florida Center for Instructional Technology (FCIT), campers work together in small groups to storyboard their movies, write scripts, set up scenes, act, film and edit. They also create their own costumes, do their own makeup and develop their own improvised effects.

At the end of each week-long session, the production teams show their finished movies on the big screen of the Tampa Theatre. Campers also design their own digital movie posters for the showcase, which are displayed on the theatre’s premiere screens for proud parents and family to see as they enter.

Ian Kirane, an 8th grader in Pinellas County, said he plans to come back to the Tampa Theatre film camp in future years after his experience this summer. Kirane said his dad, who does film and play production work, thought it would be good for him to get a behind-the-scenes look at making movies.

“I don’t like to be on camera, but I do like to edit,” Kirane said. “I would like to be a video editor for movies — one of the people who works on the animation and editing.”

Inspired by some of the set pieces at the theatre, Kirane’s group made a horror-comedy about a man who wins a haunted house in a lottery and has to find a way out after getting trapped inside.

Kellie Etling, a camp counselor of four years, said the camp helps students explore creative interests in live action filmmaking and stop motion animation that they might not be able to otherwise. 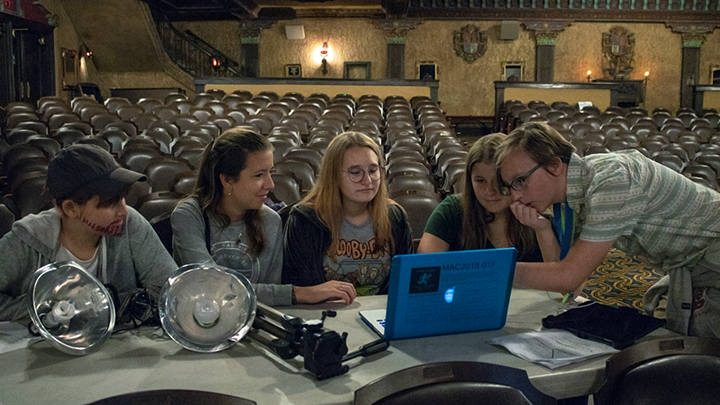 Etling herself first came to the camp in seventh grade and went every summer through ninth grade. She volunteered with the camp throughout high school and became a counselor as she entered college. Growing up, she said that working in film wasn’t even on her mind because she went to a small school that lacked up-to-date digital media resources for students.

She said that coming to the Tampa Theatre film camp made her realize how passionate she is about filmmaking and allowed her to explore her own talents behind the camera. Currently, she is pursuing a film studies degree at the University of Tampa.

“My favorite part (about being a camp counselor) is having the opportunity to do for someone else what was done for me here at this camp and hopefully inspire some future filmmakers,” Etling said. “We need people who are passionate and inspired to go into the film industry.”

Most of the camp’s counselors and staff are temporary FCIT employees, who are also classroom teachers during the school year. Camp director Nathan Wolkenhauer, a former 5th grade teacher for six years, said that in addition to running the camp, FCIT also creates the camp’s curriculum and provides video equipment.

Because the camp’s counselors are either teachers or have a large amount of filmmaking experience, Wolkenhauer said, campers learn in a structured, education-focused environment. At the same time, the historic architecture and classic movie-themed spaces in the Tampa Theatre provide students with plenty of creative inspiration to bring a short film idea to life.

“It’s a really good collaboration, and it’s sustainable,” he said. “For a lot of campers we see, it’s their third or fifth year, and a lot of counselors have been here for years because they love the camp.” 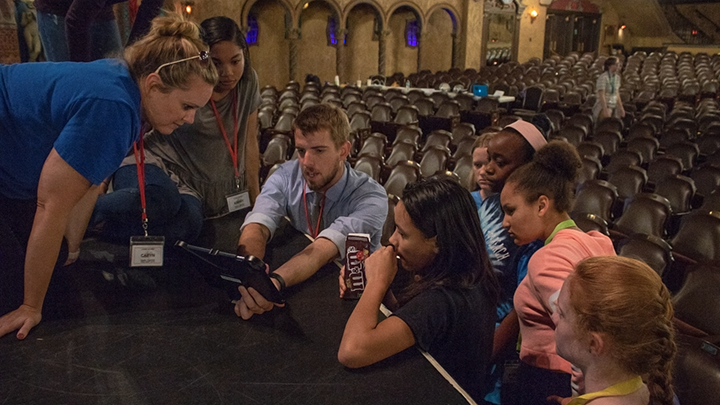 Camp director Nate Wolkenhauer (third from left) and other camp counselors help students plan out a shot for their film.

One of the main educational goals of the camp is to make campers more aware as consumers of all kinds of video content, said Tampa Theatre Director of Marketing and Communications Jill Witecki. By learning the steps of the filmmaking process, she said, students also learn how directors of film, TV and commercials influence audiences’ thoughts and emotions.

“As a nonprofit, community-supported cultural arts organization, Tampa Theatre considers education to be a critical part of our mission,” Witecki said. “Film education, in particular, feels like a niche that the Theatre is uniquely qualified to fill, and it is the partnership with FCIT and USF that gives us the tools and resources we need to keep the program vibrant and relevant year after year.” 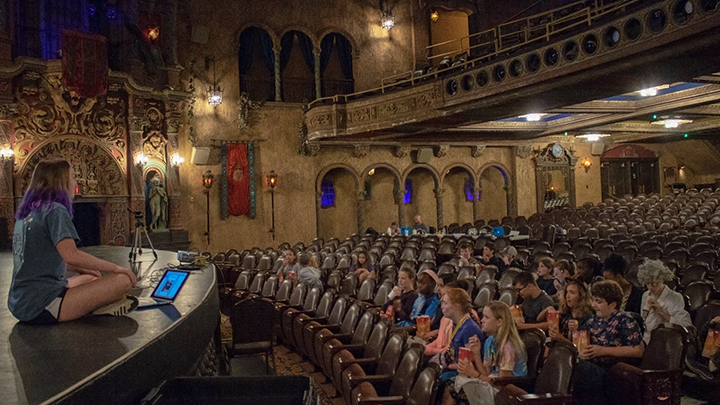 A camp counselor gives students a tutorial on making movie premiere posters for their film projects.

Throughout his 10 years of working at FCIT and his time being a camp counselor and director, Wolkenhauer said he’s seen a slew of memorable films and stop motion animations from campers.

“It’s really hard to pick a handful of movies (as the best ones) because they’re all amazing,” he said. “They’re all so different.”

While they all make their movies in the same theatre, each group of students ends up with a unique short film that’s all their own.

“You have horror, action, adventure movies and now even a musical,” Wolkenhauer said. “It’s incredible what these kids can do in five days’ time.”