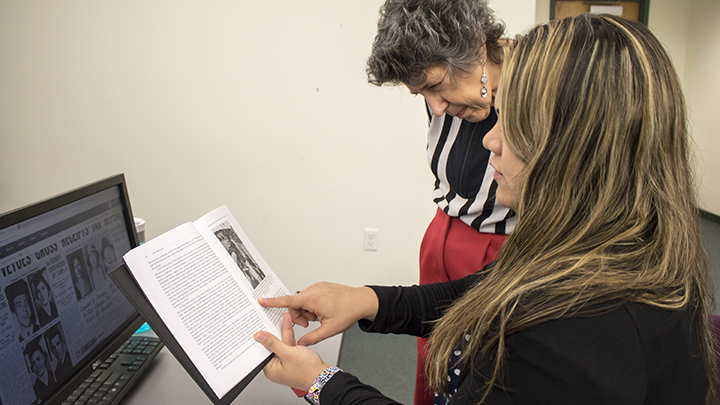 To explore what the general public knew about the Holocaust through news reports and stories of the time, students in the graduate course, "Teaching the Holocaust," shared their research on archived Floridian newspaper articles covering overlooked events of the time.

It took graduate student Yenisley Colon many days of sifting through newspaper archives to find a presumably lost article in the Tampa Bay Times on the voyage of the St. Louis. Her perseverance paid off when she came across a promising headline from June 6, 1939 and finally found the article she was looking for.

Colon presented to others about her discoveries on the voyage of the St. Louis. Through her findings, she learned that 907 Jews left Germany to seek refuge in Cuba, but as the ship was approaching Cuban waters, the government revoked its approval for the ship to dock. Thirty passengers were able to sneak onto the island, but the rest of the 877 refugees sailed around the state of Florida and were also refused access to the United States. When the ship returned to Europe, Great Britain, France, Belgium and the Netherlands each took in a portion of the refugees remaining on the ship.

“I’m Cuban, and the St. Louis article shows a sad part of my country’s history,” said Colon. “I’m an immigrant so I know how that feels… This is just a little piece, one event. It’s not even the whole history.”

To explore what the general public knew about the Holocaust through news reports and stories of the time, students in the College of Education's graduate course "Teaching the Holocaust" shared their research on archived Floridian newspaper articles covering overlooked events of the Holocaust.

Since 2016, student contributions have been submitted and accepted by the United States Holocaust Memorial Museum (USHMM) in Washington, DC, for a crowdsourced project titled, “History Unfolded.” The collection displays local, national and international newspaper sources chronicling the events under German-occupied Europe during the Third Reich.

“What challenges historians, researchers and students alike are the channels of communication that were used 80 years ago,” said Michael Berson, PhD, a professor of social science education and the instructor for the course.

Newspapers were the US’s primary source of contact in global news, but much of this content has been lost over time. Especially since resources were limited, and newspapers are disposable, after one reading, Dr. Berson says, they would then be used to wrap food, light fires or as packing material.

According to Berson, it’s probable most of the articles presented hadn’t been seen since publication. The purpose of the assignment was to analyze how extensive coverage of marginally overlooked events were primarily sourced and reported in newspapers. With constant newsfeeds and higher media circulation today, the project addresses public awareness, or a lack thereof.

“It’s like looking for a needle in a haystack,” said Dr. Berson. “You have to look for a date, a name or an event— it’s a search.”

During the research process, student discoveries ranged from uncovering forgotten details on the voyage of the St. Louis, the Nuremberg race laws and Hitler’s defamation propaganda strategies targeting minorities.

Arren Swift, a full-time teacher at Seminole High School and USF doctoral student who previously took the course, attended the event to share his past work for the project, which is currently on display at the USHMM. Swift said he still uses the fact finding and discovery techniques taught by Dr. Berson.

“Students can easily look at something and learn it, and not make those connections…” Swift said. “Adding these elements relates to their day and makes it more relevant for students to master the concepts.”

In 1994, Florida passed a mandate for Holocaust instruction in public schools. As a result of this requirement, the curriculum and teaching resources students receive in this graduate-level course will directly apply to their classrooms.

“Dr. Berson is giving these students the opportunity to go and investigate and explore using project-based learning… It’s more than just learning, really, it's an experience,” Swift said. “I do a lot to model what Dr. Berson has taught me and to implement it into my own classroom.”

Combining technology and technique helps students empathetically contextualize the history of the event. Berson also applies these teaching techniques in his work with the USC Shoah Foundation, an organization dedicated to making audio-visual interviews with survivors and other witnesses of the Holocaust and other genocides that serve as a compelling voice for education and action.

“We are clear not to compare to any other event,” said Dr. Berson. “The goal of this course is to do justice for an important part of history and to represent the voices in historically accurate ways.”