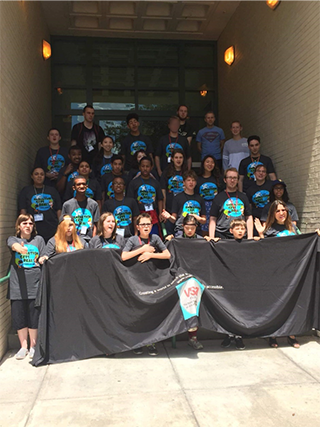 Campers, instructors and volunteers from VSA Florida’s 2018 Animation Gets Real summer camp take a group photo outside the University of South Florida College of Education.

Brandon Brooks began teaching himself how to animate at the age of three. As a child, he was diagnosed with autism, and his mother, Wendy, said she wasn’t sure what Brooks could do with his future after high school. She thought his passion for animation was just a lingering hobby from childhood.

“At that stage in my life with Brandon, I was trying to squash his animation, thinking he was too big for it,” she said. “I would say, ‘Ok buddy, but this is not what kids your age do.’”

Still, she was intrigued when she first heard about Animation Gets Real from her local Center for Autism and Related Disabilities representative. After enrolling Brooks in the camp and visiting it with him, she realized that he could turn his lifelong interest in animation into a future career.

Five years later, Brooks has participated in the annual summer camp each year since the program’s first session in 2013.

“The very thing I was trying to squash was the very thing I should’ve been encouraging,” she said. “(This camp) completely changed our lives and our paths, and it totally opened up a (path) for him that I didn’t see ... He’s always been telling me he wants to be an animator. Now he can actually be an animator.”

The Animation Gets Real summer camp celebrated its fifth anniversary this month, welcoming students between 13 and 22 years old with autism and related disabilities to camps in both Tampa and Miami to learn the basics of creating animated videos, music and sound effects.

A nonprofit organization housed in the USF College of Education, VSA Florida conducts arts education programs for individuals with disabilities from across the state of Florida. The goal of the organization’s work is to provide, support and champion arts education and cultural experiences for and by people with disabilities, and to create a world in which the arts are universally accessible. 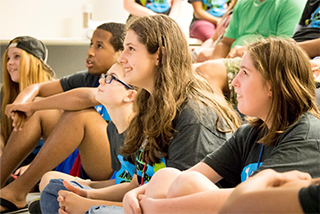 Campers from VSA Florida’s 2018 Animation Gets Real summer camp watch each other’s final performances on the last day of the camp.

Campers arrive at USF in the morning and split into two groups. In one classroom, campers work with Dani Bowman, a professional animator who was diagnosed with autism at age three and now runs her own animation studio, DaniMation Entertainment. In Bowman’s class, campers learn the basics of creating their own digital animations and follow along with lessons and workshops before developing their own animations, frame by frame.

“My favorite part (of the camp) … is to see the variety of animations that the students can come up with,” Bowman said. “Some of their animations can be simple, while others can be so artistically impressive.”

Bowman, who started making art and animations at an early age, began teaching animation to students with autism and related disabilities at 15 years old. She now teaches at several summer camps each year across the country, including Joey Travolta’s Inclusion Films summer camp, and serves as a role model for many of the students at the camp like Brooks who aspire to one day follow in her footsteps.

“I want to show young kids, teens and adults on the autism spectrum that anything is possible when it comes to learning animation,” she said. 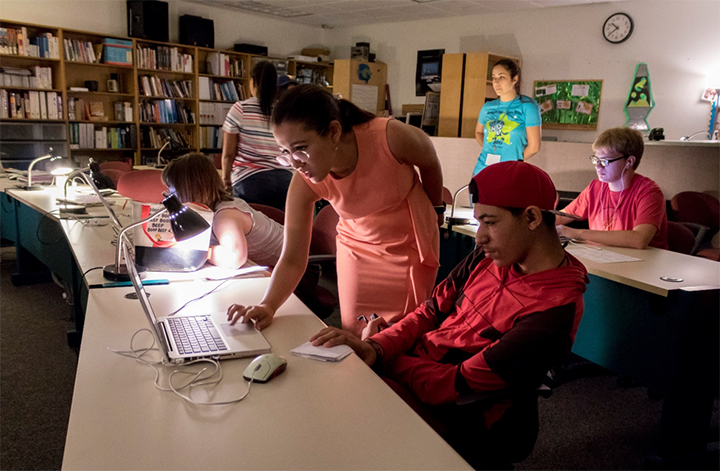 Dani Bowman, the animation instructor for Animation Gets Real, helps a student working on an animation.

In another classroom, USF School of Music professor and camp instructor Clint Randles, Ph.D., teaches campers about composing their own musical tracks through iPad music. Randles has been the camp’s music instructor since its first year and also serves on the VSA Florida Board of Directors. In Randles’ class, students are equipped with iPads, music software and a microphone. They work together to make original songs, voice-overs for movie trailers and their own sound effects for videos and animations.

“You give (campers) a fast lane to really meaningful music making that they can have with them for their entire lives,” Randles said. “It’s made a difference in families’ lives. It’s made their outlook for their future for their kids so much greater.”

Randles said that one of his favorite parts of the camp is watching campers present their work to their families on the camp’s final day. Some are initially unenthusiastic about participating in the camp at all, and he said seeing these campers excited about their music or voice work by the camp’s conclusion makes it a rewarding experience for him. 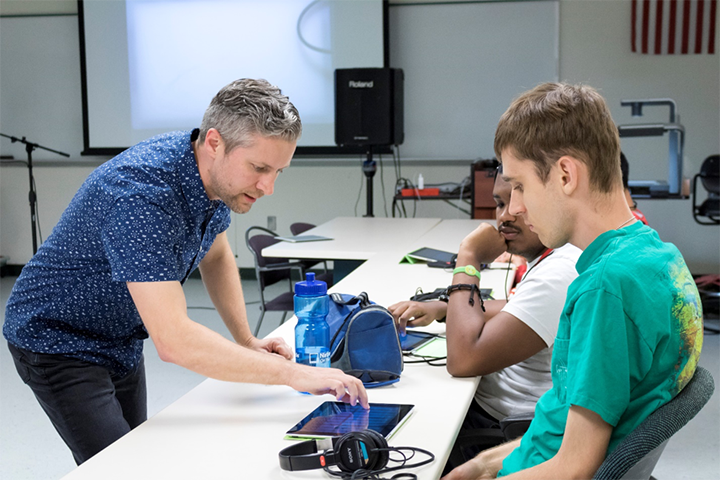 Clint Randles, Ph.D., works with an Animation Gets Real camper on fine tuning a musical part for a group song.

“They may have one speaking part, but I’m watching them, and as the speaking part’s coming up, they’re nudging their mom or their dad and saying, ‘That’s me! Listen, that’s me!’” he said. “It’s joy. You give joy to people, and when you do that, it’s really rewarding. So through the years, I’ve been able to see lots of people have joy that they didn’t have before.”

Through Animation Gets Real, VSA Florida and the camp’s volunteers work to help campers walk away with the creative skills and knowledge that they can use to pursue a future career in the arts.

Now, as a 19-year-old aspiring animator, Brooks creates complete animation shorts from scratch, including voice acting and sound effects. He’s done graphic design work for a local autism awareness organization’s annual charity walk and has worked on various animation projects for others in his community.

Brooks continues to participate in VSA Florida’s Animation Gets Real summer camp and shares his passion for creating art and animations with like-minded campers.

“I’m older than the other kids (at camp), so I’m hoping to become one of the (Animation Gets Real) staff,” he said. 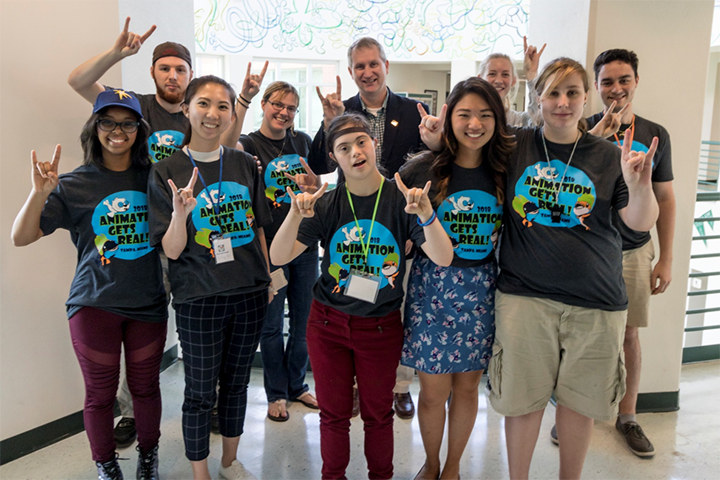 Wendy Finklea, director of programs for VSA Florida, said Animation Gets Real creates an environment designed specifically for students with autism spectrum disabilities and their individual learning and social needs. When it comes to planning curriculum and giving participants creative skills and knowledge they can use after the camp, the population VSA Florida’s camp serves doesn’t have many other options available to them in Florida.

“There are organizations that provide day programs for students with disabilities, but they’re not specific to students on the spectrum,” Finklea said.  “A lot of (other programs’) staff are not prepared to understand the little nuances (in students’ learning styles) or understand the sensory issues and overstimulation that can happen so easily.”

Finklea said that VSA Florida often gets calls asking if Animation Gets Real could be brought into other communities across Florida. She said it currently plans to move the camp throughout Florida in future years to offer the program in even more communities.

“There’s a huge need for quality programming for students with disabilities, and we have only scratched the surface,” she said.

Learn more about VSA Florida’s other statewide camps and programs at the organization's website.