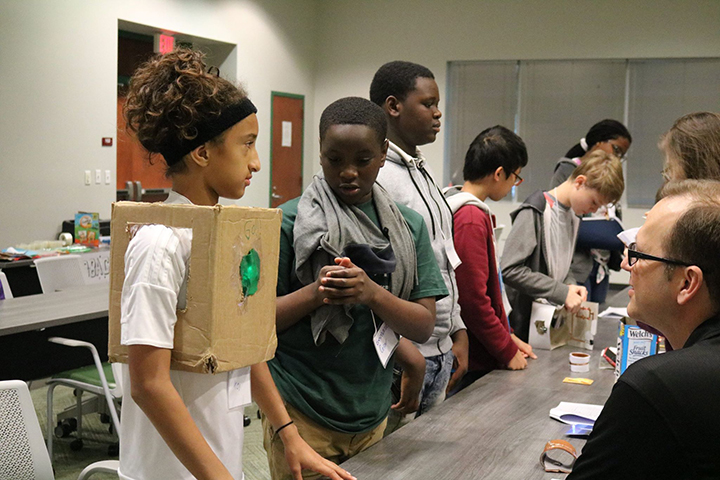 The College of Education was host to a camp created by the Lemelson-MIT Program that encourages young inventors to develop hands-on skills in science, technology, engineering and math (STEM) through the process of invention and creative problem-solving.

The University of South Florida (USF) College of Education was host to a three-day camp that introduced Hillsborough County Schools students to the world of inventing, creating and problem-solving using new technologies.

The camp, created by the Lemelson-MIT Program at the Massachusetts Institute of Technology (MIT), encourages young inventors to develop hands-on skills in science, technology, engineering and math (STEM) through the process of invention.

Students, some of who had never taken a technology course, were introduced to making circuit boards to power LED lights to create wearable textiles, like NASA space suit technology. With many of the students being new inductees to working with technology, mentors in the program shared how they found inspiration for their inventions and helped them get started on their projects.

An assisting instructor for the camp, Clara Mabour, a biology teacher at Northeast High School, brought the students through the construction process. As a student, she won a $10,000 grant from Lemelson-MIT InvenTeam to pursue creating a water filtration system following the 2010 earthquake in Haiti. Her invention was selected to present at the 2013 White House Science Fair.

Now, as a teacher guiding students on their inventions, Mabour said she sees the other side of being a STEM educator.

“I see myself in them—I was always inspired by challenges,” Mabour said. “Even though they said they wanted to give up, they kept going back and trying again.”

Students began to understand how to start the invention process, by realizing the purpose of technology and invention to solve problems that can help others. This type of hands-on experience is important for students to have, said Stephanie Holmquist Johnson, PhD, Associate Director of Innovative Education Initiatives for the David C. Anchin Center for the Advancement of Teaching, because it helps students remember positive moments of problem-solving and building creative inventions.

“You remember what you create,” Holmquist Johnson said. “It’s all about the hands-on retention. What we ask ourselves is ‘what do classrooms of the future look like?’ and this is it.”

As the last project for the camp, students were provided with three social problems to solve with an invention—the most popular being a challenge to invent a safer Halloween costume for toddlers.

Presenting their prototypes and ideas in the final showcase, students saw their gadgets come to life. They creatively explained to an audience of family members, faculty and staff about the infinite ways colored LED lights, felt and cardboard could solve this problem.

During the final presentations, technologies malfunctioned, batteries went out, circuit boards had to be rerouted and copper tape had to be replaced. But as rookie inventors, the students learned it’s all about the process of troubleshooting towards new solutions.

“I’ve seen these students definitely grow in confidence,” said Leigh Estabrooks, EdD, an Invention Education Officer at MIT. “They were timid on the first day, but they tried to understand how their inventions work no matter the outcome. They understand, like many things in life, things don’t always work the first time.”

After their presentations, every student took home their self-made contraptions as a souvenir and earned a graduating certificate to commemorate their efforts. Additionally, the students left the camp with a better understanding of how they can influence the future of technology and are inspired to pursue a degree in a STEM discipline when they go to college.

“Girls should do technology,” said Jahaira, a seventh-grader at Trinity School for Children who participated in the camp. “I feel more knowledgeable now, like I can do science.”