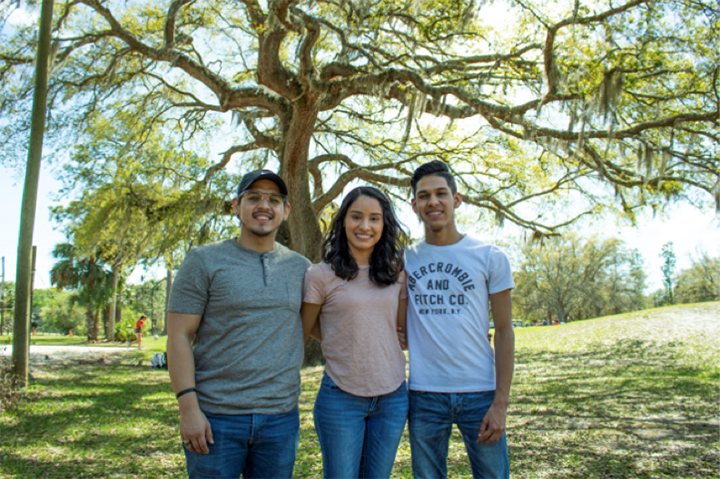 The Center for Migrant Education’s Family Day picnic reunites past and present students with their friends and families. (Left to right) Ivan, Abigail and Henry Calderon, siblings who all participated in the Center’s College Assistance Migrant Program.

Mercedes Nunez always wanted to become a teacher, and knew that to accomplish this dream, a college degree was in her future. But as a student whose parents were migrant farm workers and constantly on the move to follow available work, a college degree wasn’t always her expected path.

Nunez was accepted to the College Assistance Migrant Program (CAMP), a program hosted by the Center for Migrant Education at the University of South Florida (USF) that assists students from migrant and seasonal farmworker families with navigating the pursuit of a college degree. She subsequently earned a scholarship from the Sunripe Foundation to help cover college costs.

“Without a scholarship, my chances of graduating were very slim,” Nunez said.

Now, an alumna of the university, Nunez teaches at Eastside Elementary School in Clewiston, Florida, where she has served for four years. Even though she earned her degree in 2015, she keeps a strong connection with USF and the College of Education by attending the Center for Migrant Education’s Family Day—an annual picnic that celebrates the achievements of students participating in the Center’s programs.

Family Day is more than an annual picnic. It’s also an opportunity for students and their families to reconnect after a semester-long separation and to meet other families who have similar backgrounds.

Established in 1986, the Center for Migrant Education at USF provides support to students from migrant farmworker backgrounds and their families as they continue their education. The Center is home to two flagship programs: CAMP, and the High School Equivalency Program (HEP) a program that helps students complete their high school degrees when they’ve had to relocate to help their families earn income and work in the fields.

Patrick Doone, director of both the CAMP and HEP programs, has impacted the lives of the students the Center serves through his involvement for the past 30 years. Doone said he believes the effectiveness of the program is a rare resource available at a four-year university like USF.

“USF is the only (four-year) institution in the entire state to offer opportunities for students from migrant and seasonal farmworker family backgrounds,” Doone said. “I’m very proud of this university for offering this educational opportunity.”

Each year, the CAMP program welcomes a minimum of 25 first-year students to USF. Resources, such as informational seminars and mandatory meetings with advisors and student mentors help participants progress through the academic and social transition into a college career—an experience that many of these students are the first of their family to participate in.

The CAMP program consistently ranks among the highest performing programs nationally with first-year completion and second-year retention rates for students averaging more than 97 percent and 98 percent respectively during the past three years.

“CAMP opens a lot of doors for a lot of students,” Nunez said. “(The students) might not realize it now, but it’s a stepping stone, and CAMP continues to make positive choices for every students’ career.” 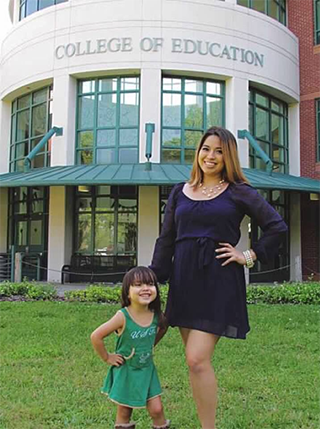 Mercedes Nunez and her daughter, Mia.

Nunez’s journey at USF wasn’t without challenges. While a student, she juggled classes, a job and being a young mother, and there were often times when she relied on support from others to make it through.

Ann Cranston-Gingras, PhD, the principal investigator and director for the Center for Migrant Education, said she remembers a time when Nunez was unable to leave her daughter at home and had no other option than to bring her along to campus.

“Sometimes responsibilities force you to make this choice,” Nunez said. “You can choose to be a victim of circumstance, or you can look beyond yourself and see what you can do for others and accept what others can do for you.”

Cranston-Gingras, who has served as director of the Center since the late 1980’s, understood the struggles of the students in the program, and she offered to look after Nunez’s daughter while she attended her class.

“...We’re a family,” said Cranston-Gingras. “(The program) is a support system… to me, it’s also a celebration of our community, students and staff to inspire future generations.”

Other students who have participated in the CAMP program over the years share similar stories of support and growth.

Ivan Calderon, a USF alumnus who also participated in the CAMP program, said the program was the single most beneficial experience during his time at the university, and that the program has been like a second family for him.

Ivan’s sister, Abigail, and brother, Henry, followed in his footsteps. Abigail is an Elementary Education major and CAMP student mentor, and Henry is a freshman in the program.

“Our parents are farm workers,” Ivan said. “Coming from a small town and with little means, it gave me the resources I needed to transition into the college experience.”

As a beginning educator and CAMP mentor, Abigail said she hopes to reciprocate the skills and values CAMP taught her. She remembers her experiences in the classroom and said she realizes how she can use her journey to help influence her students.

“When I have a classroom of my own someday, I want to be able to reach kids that are in need of support, and to be that source of encouragement.”

To learn more about the Center for Migrant Education, visit their website.