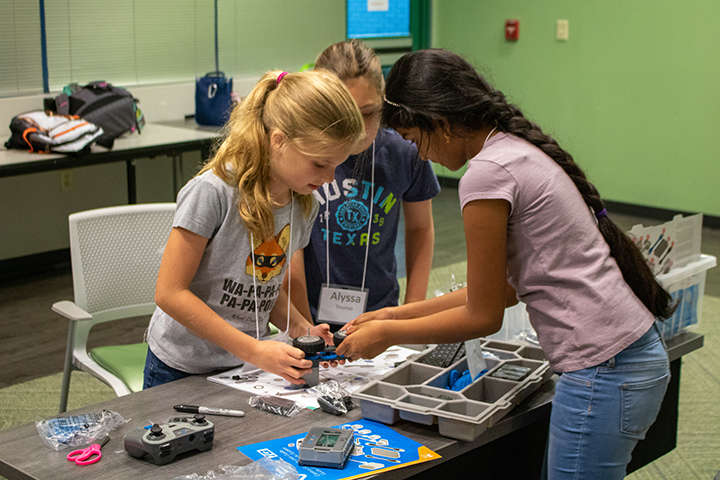 The Robotics Summer Camp, a new summer program offered by the University of South Florida's College of Education, welcomes students in grades 2-8 to get hands-on experience with robotics.

TAMPA, Fla. (June 11, 2019) — A new summer camp hosted by the University of South Florida (USF) College of Education is providing students in grades 2-8 with the opportunity to explore coding, teamwork and creative problem-solving.

The Robotics Summer Camp welcomed eight second and third grade students to participate in the first session of the week-long program, which is designed to engage students with a variety of interests. The camp’s curriculum adheres to the traditional STEM basics of coding and programming, while adding a new creative element that strengthens the students’ abilities in design and construction, said Camp Director Stephanie Holmquist Johnson, PhD.

Holmquist Johnson, who serves as the Associate Director of Innovative Education Initiatives for the David C. Anchin Center for the Advancement of Teaching, has been working with robotics in schools since they were first introduced in the 1980s. She said interest in the field has grown over the years, and that students today are now more eager to use advanced techniques while working with the robots.

“A lot more students are exposed to technology now than they were then,” Holmquist Johnson said. “Students now are less intimidated and more willing to embrace technology—it just comes naturally to them.” 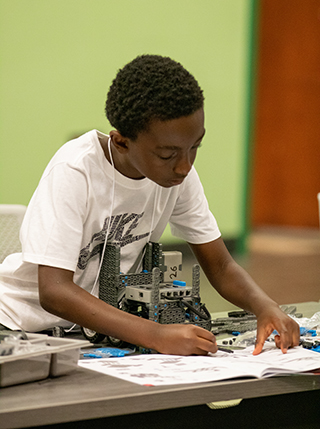 Students in grades 4-8 learn how to build their own VEX IQ robot and compete with fellow campers in the new 2019-20 VEX IQ competition game.

The Robotics Summer Camp is one of many initiatives the College of Education is developing in innovation and experiential learning. Currently under construction is The Collaboratory, a new lab space that will host STEAM-centered activities for K-12 students, as well as training opportunities for both future and practicing teachers throughout the school year. The lab is expected to open in January 2020.

The camp participants completed various projects throughout the week that used their creativity and problem-solving abilities. In activities such as a spaceship rescue mission and a pizza delivery model, students quickly learned how degree measurements affect the path of their Roamer, a robot that can be programmed to move and turn in different directions.

Initially working with partners to build confidence and teambuilding skills, later in the week the campers worked by themselves to participate in competitions, such as an Invention Convention. During the activity, students were assigned to create a prototype invention that can help solve a world problem.

The campers’ creations showcased solutions made of plastic cups, pipe cleaners and Popsicle sticks that represented prototypes of various inventions, such as X-ray goggles for doctors, an emergency wristband to locate missing persons and an electric bike for people who are unable to walk.

Gretchen Stewart, a graduate assistant in the College of Education, assisted with facilitating the camp and working with students on their projects. She was able to see first-hand the creative nature in which the students completed their projects.

“They are all really investing into their ideas, refining their thinking and solving their own problems,” Stewart said.

One student, Vu, an incoming second-grader at Tampa Palms Elementary School, said when he first found out about the camp, he wanted to be the first to sign up. He thought the camp would be a place for him to exercise his passion for measurements.

“Science and math is easy. I really want to challenge myself,” Vu said. 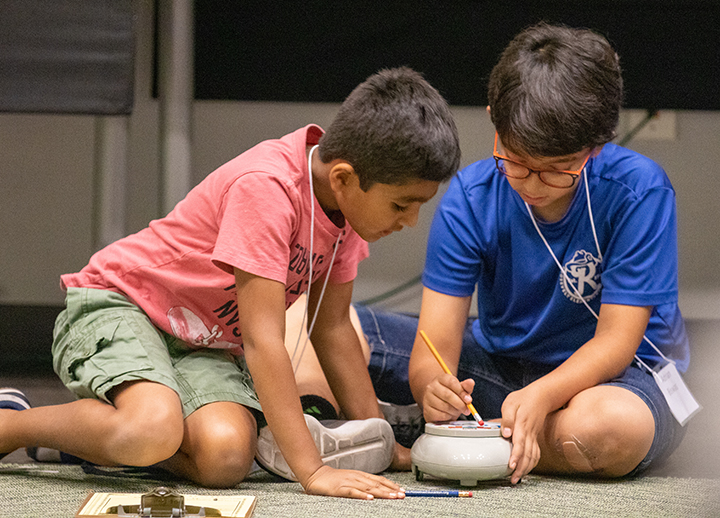 Second and third-grade students spent the week learning how to program their own Roamer robot, a robot that can be programmed to move and turn in different directions.

This program is a first of its kind for the College of Education, and Holmquist Johnson said she hopes the camp will serve as an opportunity for showing young learners how intimidating subjects, like math and science, can be fun.

“They don’t realize they’re doing math with coding and programming,” Holmquist Johnson said. “Even if they don’t like those subjects, technology is a tool that can increase and benefit their learning.”