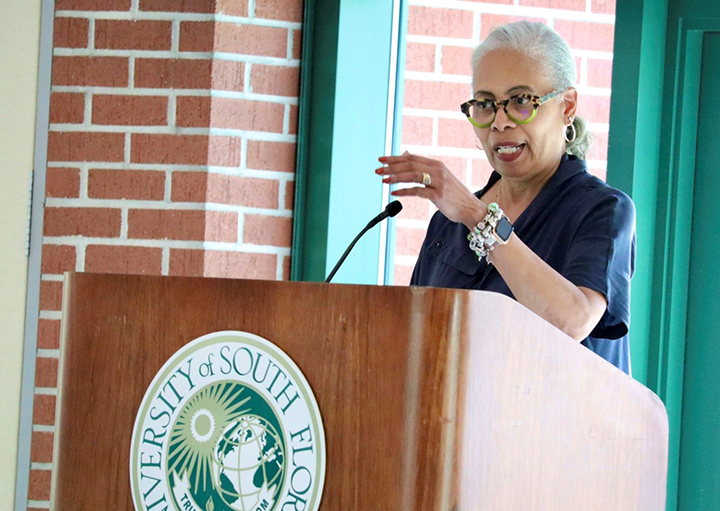 With more than 50 years of teaching experience under her belt, educational expert Dr. Gloria Ladson-Billings gave a talk at the University of South Florida in a presentation titled, "You're Teaching, but are They Learning?"

In an event hosted by the USF College of Education’s Diversity Committee, Dr. Gloria Ladson-Billings, professor emerita at the University of Wisconsin-Madison and president of the National Academy of Education, led an engaging workshop that centered on the theme, “You’re Teaching but are They Learning?”

With more than 50 years of teaching experience under her belt, Dr. Ladson-Billings was able to share key tools and strategies educators need to be effective teachers in today’s educational environment.

Understanding what students’ value and who they are was a matter that was heavily discussed throughout Dr. Ladson-Billings’s workshop. In one demonstration, audience members were able to see why this is necessary.

After instructing everyone in the room to stand up, Dr. Ladson-Billings told individuals that if they weren’t on the social media platform shown on the screen they had to sit down.

When logos for the popular platforms Facebook and Twitter appeared, about half of the attendees in the room were still on their feet. Yet, when Instagram and Snapchat—two channels that have risen in popularity in the recent decade—were shown, only a couple of individuals in the audience were left standing.

This outcome led Dr. Ladson-Billings to explain how the communication channels today’s youth are using are different from educators, and that understanding this trend may help educators better understand their students.

“We are essentially living in two different worlds,” Dr. Ladson-Billings said. “The only reason why I’m on all of these platforms is because of students. It’s my way to see what they’re talking about (and) what matters to them.”

As Dr. Ladson-Billings explored the idea of teachers understanding who their students are, she described several factors such as gender, race, ethnicity, disabilities and economic needs that shouldn’t be overlooked. In one example, Dr. Billings explained that most schools tend to undervalue the skills second language learners bring to the classroom.

“This is the only society I know where knowing more is treated like knowing less,” Dr. Ladson-Billings said. “If your school offers Spanish as a world language course and you have Spanish speakers, why wouldn’t you tap them to help students learning the language pronounce things correctly?”

When addressing the challenges that students who are economically disadvantaged face in today’s schools, Dr. Ladson-Billings shared a story about one teacher who tasked their students with making a toothpick bridge. The students were sent home with 100 toothpicks and were told they had to make the bridge sturdy enough to carry their own textbook.

Though this homework assignment served to introduce students to the topics being reviewed in class, Dr. Ladson-Billings pointed out that the students had to gather their own materials, and the students who couldn’t afford more expensive items such as hot glue guns did not perform as well on the assignment.

“Some kids that were given a ‘0’ may actually know how to do (the assignment) but they didn’t have the resources,” Dr. Ladson-Billings said. “I don’t want to see classrooms where kids are being rewarded for what they have versus for what they know.”

Dr. Ladson-Billings’s presentation provided attendees with many tips for how they can implement effective teaching practices in their classrooms, and she encouraged educators in the audience to step out of the traditional model of lecture-based teaching.

She explained that incorporating other teaching methods, such as a Socratic dialogue, a discussion, a demonstration or a student-led session can do much more for a classroom, primarily because the students may be more motivated to show up and participate.

“One student told me: ‘Why do I even have to go if the only thing he’s going to do is present the PowerPoint slides that come with the textbook?’” Dr. Ladson-Billings reflected. “In other words, what the student is telling me is: ‘I’m not being taught.’”

While demonstrating what it looks like to be an instructor who “chooses not to teach,” Dr. Ladson-Billings presented a movie clip of a teacher who is praised for having an orderly classroom even though he sits back and merely hands out worksheets for his students to complete.

“He’s not being rewarded for teaching, but just for keeping the kids under control,” Dr. Ladson-Billings said. “Some of you may work in buildings where that’s the reward.”

Another video, shown as an example of a teacher who “teaches at,” depicted an instructor who sped through his lectures and asked questions he would answer himself, rather than allowing his students to answer. While a good amount of the material appeared to have been covered through this approach, Dr. Ladson-Billings regarded this teaching style as ineffective because there was no engagement with students whatsoever.

The last video examples gave audience members two prime examples of the kind of teaching she believes all educators should strive towards. In one clip, an elementary teacher sang along with her students to an upbeat song she created to teach the metric system. In another clip, a high school teacher had her whole class work together to construct their own class constitution. The activity allowed the teacher to introduce the topic of the Civil War in a memorable way for her students.

“If you’re here today, it’s because you want to be a better teacher,” Dr. Ladson-Billings said to the crowd. “There are teachers who teach and learn with, and that’s what I think should be your goal.”

After speaking on varying teaching strategies, Dr. Ladson-Billings introduced audience members to the concept of Culturally Relevant Pedagogy, a form of teaching practice she coined that is designed to empower students intellectually, socially, emotionally and politically through the use of “cultural referents” that drive them towards success.

Culturally Relevant Pedagogy, Dr. Ladson-Billings said, consists of three equal components—student learning, cultural competence and socio-political consciousness. Contrary to focusing on the results of test scores, the student learning component involves teachers who explain what achievement means in their classrooms and provides various avenues for students of all backgrounds to reach it.

Cultural competence, a term that Dr. Ladson-Billings said is often misused, refers to one’s ability to be firmly grounded in the culture of their origin and fluent in at least one other culture. Dr. Ladson-Billings explained that it’s important for students to have this skill because it’s unlikely that they’ll stay in one community for the rest of their lives. However, she addressed why this is often not achieved.

When discussing socio-political consciousness, Dr. Ladson-Billings said this component is one that develops when teachers encourage their students to solve the problems that are relevant to them.

“I’m not talking about teachers coming up with problems they want kids to solve,” she said. “I’m talking about kids saying, ‘Hey teacher, this is a problem,’ and then you saying, ‘Well, what are you going to do about it?’”

As Dr. Ladson-Billings ended her presentation, she was approached by various individuals who had much to say about the information she presented.

Heather Hanks, an assistant principal at Plant City High School, said the workshop drove her to reflect on the student experiences at her school.

“Based on what I heard today, I’ve been thinking about how we work with our students and the interactions from day-to-day,” Hanks said. “I’m really excited to bring back these ideas to my teachers.”

Ora Tanner, a doctoral student in the Curriculum and Instruction program at the College of Education, said the workshop allowed her to think more critically—not just about the e-learning games she creates, but about the kind of individuals needed in education.

“From one angle, I was thinking that we needed more diverse people in student curriculum,” Tanner said. “But, it’s not just that, we need diverse people with a pedagogical understanding of culture to ensure success.”

Watch the full presentation below: