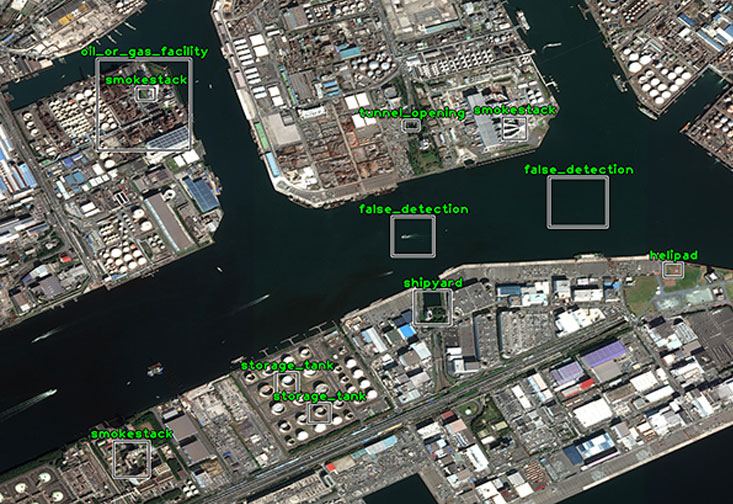 A satellite image with multiple areas that require classification. USF researchers developed technology able to automatically identify a variety of facilities and buildings found in these images. Credit: Functional Map of the World Challenge, IARPA.

New artificial intelligence technology designed by computer scientists at the University of South Florida is revolutionizing how satellite images are scanned and analyzed, paving the way for faster, more accurate intelligence monitoring and natural disaster response.

The computer program, called Hydra, is an ensemble of convolutional neural networks designed for automatic land use classification. USF researchers developed the program for the Functional Map of the World (fMoW) Challenge, an international competition sponsored by the Intelligence Advanced Research Projects Activity (IARPA). The USF team placed third out of nearly 70 entries from around the world.

For the challenge, Sarkar says IARPA released the largest data set of satellite images ever – more than a million images. The idea was to develop a program capable of automatically identifying facilities, buildings and land use in those photographs. A total of 62 different labels had to be incorporated into the program. A satellite image showing a flooded bridge near homes. Automatic identification of these types of infrastructure issues can be critically important to first responders during a natural disaster. Credit: Functional Map of the World Challenge, IARPA.

Hydra is a type of deep-neural network inspired by the way the human brain operates. Sarkar says these networks are extremely useful for a variety of A.I. applications, with many current technologies utilizing the same type of network structure.

What sets Hydra apart is the ensemble approach Sarkar and his team took when building the system. Instead of using a single algorithm in their program, the team built 12 separate, yet linked, algorithms, forming an ensemble of convolutional neural networks, like the heads of the mythological creature, Hydra.

“The idea is that we have many deep-neural networks, each of them trying to label these images,” Sarkar said. “Then, we take the average of all of them. This approach allows us to maintain the performance of the ensemble and reduce the training time.”

Sarkar says this type of digital framework is extremely valuable for a variety of applications and industries. After natural disasters, for example, many times first responders rely on geospatial land use data to guide critical decision making. Traditionally, the analysis of that data had to be done manually, a time-consuming process when lives are at stake. An automated network like Hydra could be the solution to that problem.

The intelligence community is also very interested in the technology. With satellites constantly taking pictures across the globe, agencies are looking for new ways of analyzing the huge quantities of data coming in – another possible use for this type of program.

Right now, the USF team is continuing to fine tune the core technology and plan to take part in another challenge in the future.

Learn more about the technical specifications of Hydra.

Tampa Bay Inno: Tampa startup believes USF partnership is the ticket to turning the region into the 'next Silicon Valley'