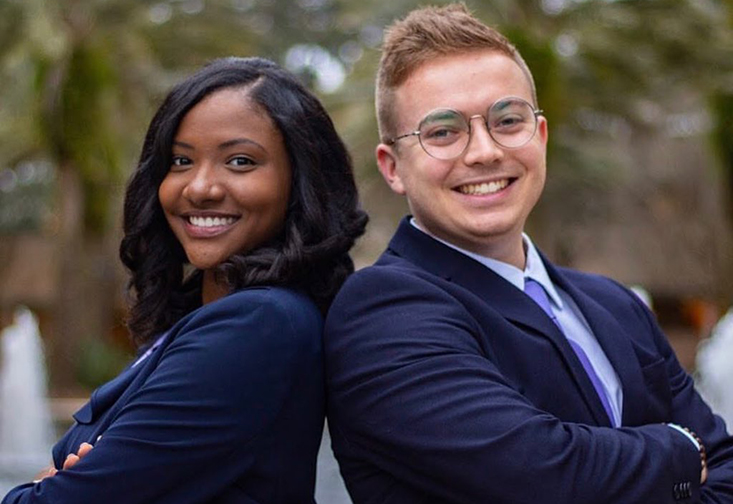 USF will soon welcome new leadership for its 60th term of Student Government (SG). Juniors Britney Deas and Travis McCloskey were elected to serve during the 2019-2020 academic year.

“Student government is a place where you can make a difference in your community and I knew that my passion and experience would be well suited for the position,” Deas said. “Being the first black woman elected to this position means that progress is being made and that I need to continue to be a positive representation for my community. It is important for young women and young women of color to know that there are no limits.

The Student Body President holds many responsibilities, including serving as a voting member of USF’s Board of Trustees and leading other high-profile committees and events. Born in Miami, Deas is majoring in political science with a minor in mass communication. After USF, she plans to attend law school and says she hopes to make a difference through public service and advocacy.

A military child, Vice President-elect Travis McCloskey grew up all over the world, spending time in Arkansas, Virginia and Germany. McCloskey is working toward a degree in business analytics & information systems and plans to work in cybersecurity after graduation.

Together, the incoming SG leadership team has six years of combined student leadership experience, serving in various roles across campus, including as members of the Order of the Golden Brahman and in other SG positions.

While Deas and McCloskey ran unopposed, they were extremely active in their outreach to the USF student body. Their platform, Bull S.H.I.F.T., is focused on several key values; Success, Health, Innovation, Finance and Tradition. The pair hope to make a tangible impact in the lives of students across campus by developing more resources to help students struggling with homelessness or mental illness and by working to foster a more inclusive environment on campus.

“I hope to help make USF a place where bull pride extends beyond campus borders, where representation is seen in the community, and where USF is more than just a place, but a home,” Deas said. “My vice-president and I want to advocate for success, health, innovation, finance and tradition by creating better networking opportunities for students, promoting safety, and fostering school spirit.”