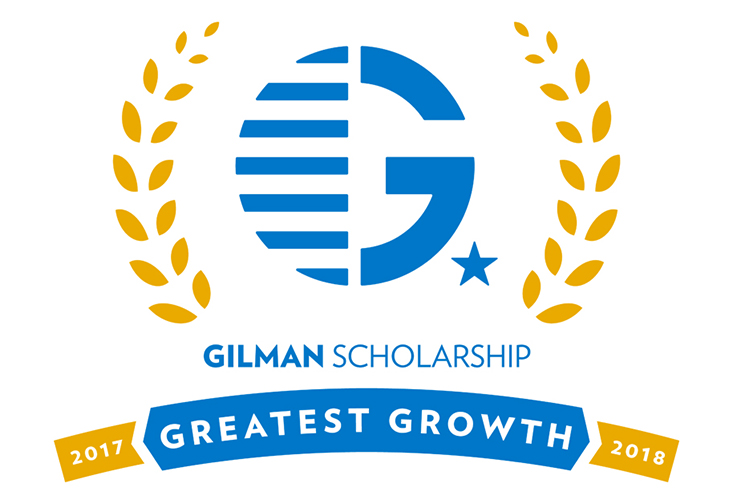 For the second time in two months, the University of South Florida has earned national recognition for increasing diversity in study abroad programs. This week USF was named a 2017-2018 Gilman Greatest Growth Institution, in the category of racial and ethnic minority students. This honor comes from the U.S. Department of State’s Bureau of Education and Cultural Affairs’ Benjamin A. Gilman International Scholarship.

The Gilman Scholarship, available only for lower-income students who receive a federal Pell Grant, provides up to $5,000 for study abroad costs. Overall, USF increased its total amount of Gilman Scholars from 16 in 2016-17 to 37 last year, the highest number among colleges and universities in Florida and sixth in the nation. Of those 37 recipients, 29 were racial or ethnic minority students.

All Gilman recipients study or intern abroad for a minimum of three weeks and have the opportunity to gain a better understanding of other cultures, languages, and economies. The goal is to better prepare them to assume leadership roles with an understanding of international relations.

This honor comes just weeks after USF earned the 2019 Andrew Heiskell Award for Innovation in International Education, in the category of access and equity.

“We are immensely proud of our diverse group of Gilman Scholars and their work to increase USF’s global understanding and impact,” says Ralph Wilcox, USF Provost and Executive Vice President. “This talented group of 37 scholars embodies USF’s commitment to diversity and access as well as serves as a model for fellow students to engage with USF’s Office of National Scholarships for not only this award but the many other prestigious opportunities available to all students.”

In addition, USF’s Office of National Scholarships has worked closely with USF’s Education Abroad office and multiple campus partners to increase the number of qualified applicants for the Gilman award.

Separate from this honor, USF has already made great strides for the 2018-19 Gilman cycle. Thirteen students received awards during the early application window for summer 2019, the most from any institution in the United States.

In recent years, USF has also received national recognition for eliminating the achievement gap by race, ethnicity and socioeconomic status, a rare achievement in higher education.

In 2018, USF was ranked the top institution in Florida and the ninth best performing school in the nation for serving Pell Grant students.