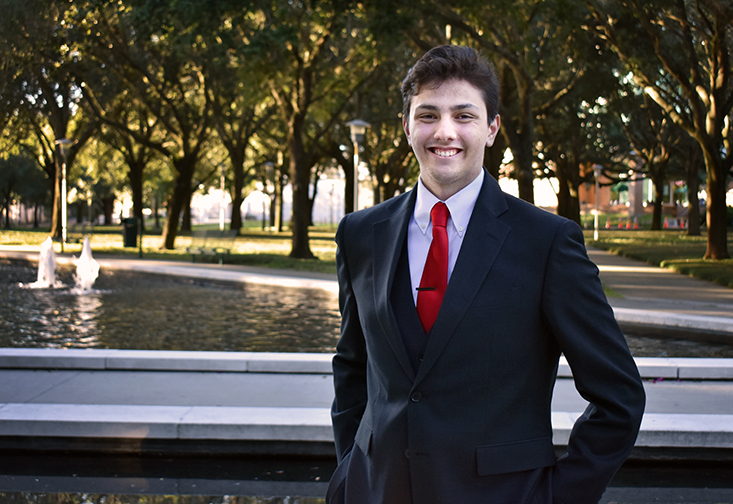 Alexander Mercier was six years old when his mother began to suffer from a painful illness that initially stumped her doctors. After three years, she was diagnosed with Lyme disease, a likelihood initially dismissed because it is uncommon in his home state of California and throughout the western U.S.

The experience triggered in Mercier an interest in epidemiology, the study of disease, and eventually led him to focus some of his most prominent research at USF on preparing for the next pandemic.

His innate curiosity, combined with his outstanding record of academic achievement and a well-rounded list of interests that includes art and music, has led to Mercier becoming the first Rhodes Scholarship finalist in USF history.

A double major in pure mathematics and microbiology who expects to graduate in 2022, Mercier will participate in his final interview with Rhodes Scholarship evaluators later this month and learn the outcome a few weeks later.

Rhodes scholars spend up to three years in graduate studies at the University of Oxford in England as part of the oldest and perhaps most recognized scholarship program in the world. Mercier is one of 20 finalists for two scholarships that will be awarded within U.S. District 7, which includes Alabama, Florida, Louisiana, Mississippi, Puerto Rico and the U.S. Virgin Islands. The Rhodes selection committee awards 100 scholarships worldwide each year, 32 to students in the United States.

“Alexander embodies the University of South Florida’s commitment to providing our students with opportunities to perform cutting-edge research during their undergraduate experience,” said Ralph C. Wilcox, USF provost and executive vice president. “He is richly deserving of the consideration he has received from the Rhodes Scholarship selection committee as USF’s first finalist for this prestigious award.”

USF has previously nominated students for the Rhodes Scholarship, most recently in 2016. Mercier is the first to emerge from the rigorous evaluation process that leads to the identification of finalists. His selection reflects the breadth of qualities the Rhodes selection committee seeks in candidates -- outstanding intellect, character, leadership and commitment to service.

"The Rhodes Scholarship committee looks for four criteria in a candidate: academic excellence, energy to use one's talents to the fullest, duty and sympathy to the weak, and a moral force of character,” Mercier said. “I am honored that they found those four criteria in my application, and I am truly grateful to USF mentors and others for allowing and encouraging me to live these ideals to their fullest."

Mercier, from Irvine, California, also considered MIT before enrolling at USF after completing an associate degree in mathematics through dual enrollment at St. Petersburg College. A conversation prior to making his college choice with Sayandeb Basu, director of USF’s Office of National Scholars, helped solidify his plans.

Basu was instrumental in helping Mercier connect with faculty researchers, including USF assistant professor and integrative biologist Andrew Kramer. Their work together helped shape his interest in network sparsification, a method that employs mathematics to more quickly identify important connections in the spread of disease. The research could accelerate containment of pandemics such as COVID-19.

Mercier subsequently worked alongside noted network expert Christopher Moore through a research fellowship with the Santa Fe Institute. The two created a metric to produce a standard method of evaluation for network sparsification, something that didn’t previously exist. Moore and Mercier later joined Samuel Scarpino, managing director of the Rockefeller Foundation’s Pandemic Prevention Institute, to continue their research.

Basu recognized in Mercier the potential for outstanding scholarship even before he arrived at USF. He notes the diversity of Mercier’s body of work at USF along with his extracurricular and community volunteer interests.

Mercier is first author on a research article submitted to the Proceedings of the National Academy of Sciences and currently in review. He is president of both the USF Mathematical Association of America Putnam Chapter and the Russian Culture and Language Association. He has served meals to homeless individuals at the Trinity Café in Tampa, performed piano arrangements at church fundraisers to address food insecurity and is an accomplished artist and photographer. He produced a short documentary film, “Drop-by-Drop,” capturing the plight of the homeless population in the Tampa Bay region through a series of vignettes.

“Alex aspires to pioneer new approaches to modeling disease spread by integrating data science, mathematics, biology and economics,” Basu said. “The Rhodes Scholarship would help to build lifelong networks with other scholars and world leaders who, like Alex, care about using knowledge for social good.”

Mercier was one of two USF students, along with physics major Kelli Ann Lynch, to be named a 2021 Goldwater Scholar, the most prestigious award in the country for excellence in undergraduate scientific research.

A student in the Judy Genshaft Honors College, Mercier is a finalist for another international award, the Marshall Scholarship, which also funds graduate study in the United Kingdom. Marshall selections will be announced later this fall.