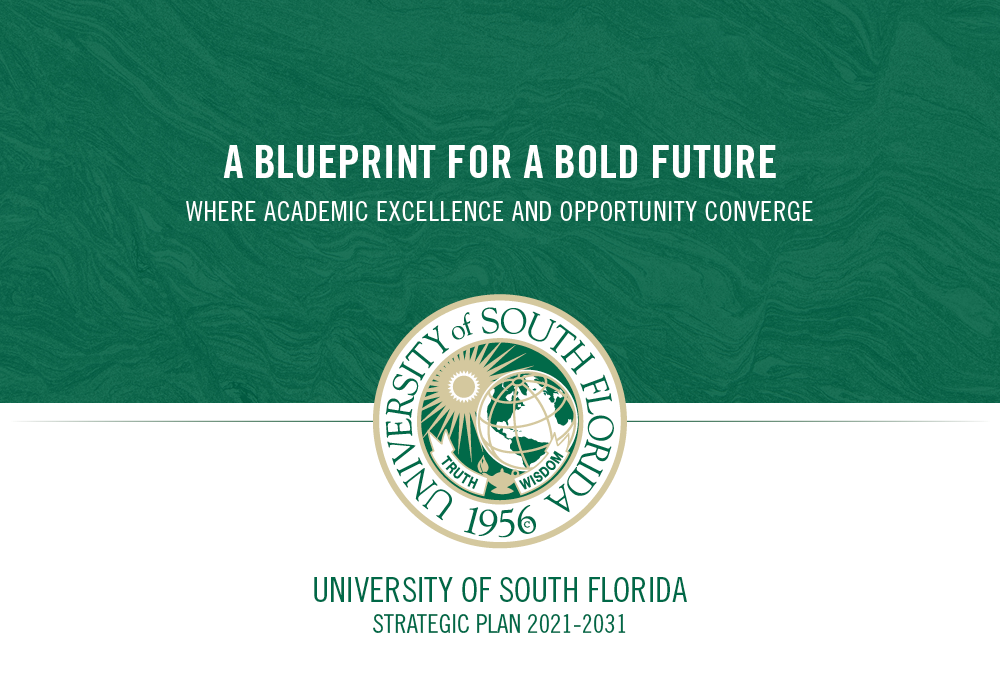 The University of South Florida has unveiled its blueprint for the next decade.

The USF Board of Trustees today approved “A Blueprint for a Bold Future: Where Academic Excellence and Opportunity Converge”. The strategic plan sets a focused direction for USF, reinforces the university’s commitment to the communities it serves and establishes strategic initiatives that reflect USF’s many strengths.

“We are unveiling a strategic plan that positions the University of South Florida as the state’s top urban research university, while supporting bold aspirations and prioritizing our commitment to faculty excellence, student success and world-class research,” USF President Steve Currall said.

In his letter introducing the plan, Currall notes that the process of charting the university’s course  began with, “and has been continuously guided by,” the adoption of USF’s Principles of Community, which emphasize the university’s commitment to inclusion, civility, freedom of expression, evidence-based deliberations and vigorous debate.

The task force and university leadership devoted nearly 200 hours to gathering input from faculty, staff and students across USF’s three campuses, as well as alumni, donors, business and community leaders and elected officials.

Stanish called the experience “really gratifying,” adding that he is proud of his task force colleagues.

“They came together for the good of the university, no one was parochial,” he said.

A key theme of the plan is USF’s role as an urban research university. It notes that of the nation’s roughly 4,300 colleges and universities, in 2019, only 160 spent $100 million or more on research. According to the National Science Foundation, that represented 91 percent of all academic research conducted in the U.S. in that year.

Of those 160 institutions, 114 are public universities, and of those, only 42 are in an urban setting. In other words, 1 percent of America’s institutions of higher education are public research universities with a main campus set in a metropolitan area with a population of at least 1 million. USF is in that 1 percent.

“Urban research universities, such as USF, are indispensable intellectual engines for addressing the challenges of the future,” Currall writes in his introductory letter.

Stanish emphasized the importance of the feedback received by the task force in crafting the initiatives, noting that they “emerged from our consultative process.”

USF will seek Florida Board of Governors’ approval of the strategic renewal plan at its Sept. 1 meeting.