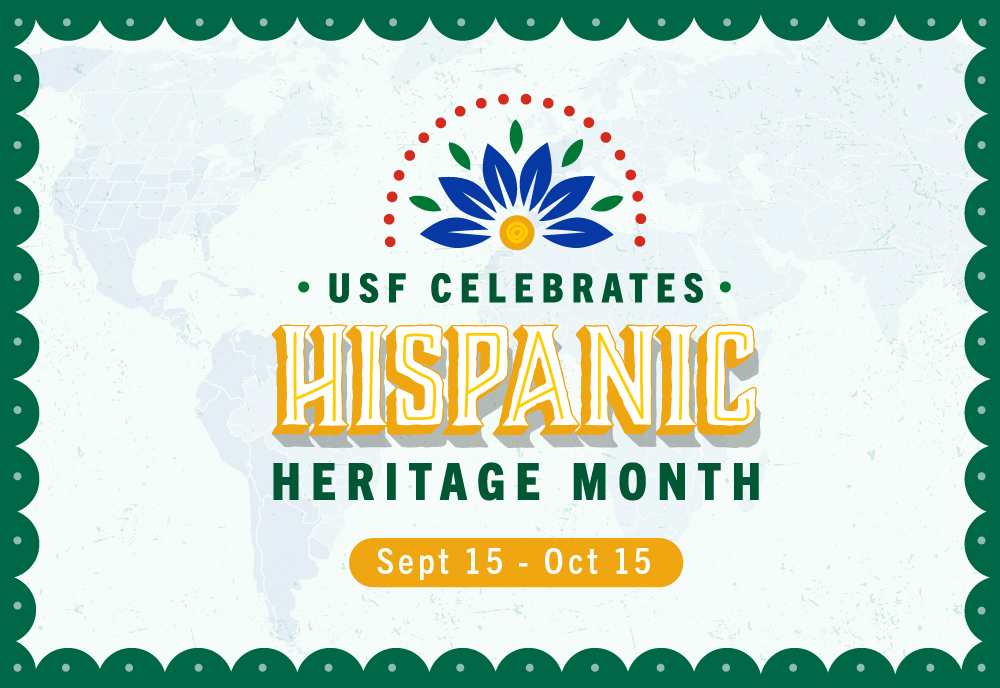 Hispanic Heritage Month is recognized in the U.S. each year from Sept. 15-Oct. 15 as an opportunity to celebrate the achievements and contributions of Hispanic Americans who have positively influenced and enriched our communities and nation.

At USF, this year’s celebration will kick off on Sept. 15 with a community luncheon at the Marshall Student Center followed by a series of events scheduled throughout the month. In particular, the week of Oct. 3-6 will highlight the accomplishments, contributions and justice-engaged work of Latino influencers as activists, poets, performers and educators.

The events are an opportunity to pay tribute to a community with deep ties to the formation of the university. 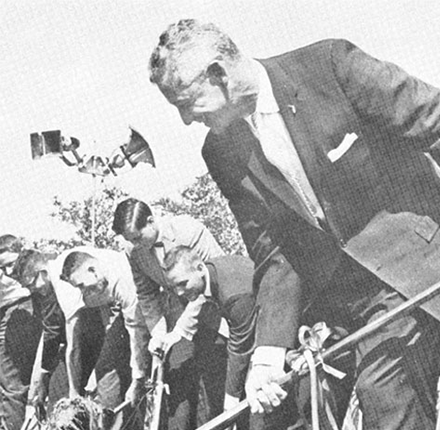 The book, “University of South Florida: The First Fifty Years, 1956-2006,” documents the vision of USF founder Sam Gibbons that the university serve, among others, the children of Tampa’s wartime shipyard workers, as well as the descendants of the immigrant cigar workers who decades earlier launched the city as Florida’s industrial hub.

As the book describes, attending the Tampa campus groundbreaking in 1958 was Tampa Mayor Nick Nuccio, himself the son of immigrants, who spoke of the “aspirations of the growing city and its ethnically diverse residents.”

Nuccio’s nephew Dick Puglisi, who became director of the USF College of Education’s Gus A. Stavros Center, was also at the ceremony and in the book describes what USF meant to Tampa’s Cuban, Spanish and Italian immigrants. “It was an exciting period. So many of us were raised in Ybor City from immigrant families and did not have the financial resources to even think about going away to college. If USF had not been available, I would hate to think of the limited opportunities in our lives.”

From USF’s founding among the diverse communities in and around Tampa Bay, its support of Hispanic, Latinx/a/o students continues today with its commitment to provide greater access to higher education for underrepresented students. Throughout the past 20-plus years, enrollment at USF among Hispanic undergraduate students has almost tripled, and the university continues its work to achieve federal designation as a Hispanic-Serving Institution.

USF’s dedication to diversity, equity and inclusion (DEI) – including its Hispanic American, Latinx/a/o community – is a core commitment in USF’s strategic plan, which provides clear direction in its goals to recruit and retain staff, enhance academic programming, support research and foster a dynamic work environment.

Among those advising USF leadership on the university’s DEI initiatives is the Status of Latinos (SOL). The organization is known universitywide for hosting the annual Hispanic Heritage Celebration Awards, which recognize students, faculty, staff and community leaders who contribute to the Latinx community through academic research and/or community service. Registration is open for this year’s awards, which are scheduled for Oct. 6, and will feature SOL scholarship recipients and the Hispanic heritage poster competition participants.

Since their initial general body meeting in October 2021, the Alianza board has met with more than 100 faculty and staff, opened new avenues of communication with university leadership and participated in numerous diversity, equity and inclusion-related task forces and committees. The organization has also engaged with community leaders to begin collaboratively addressing issues of common concern within the community. 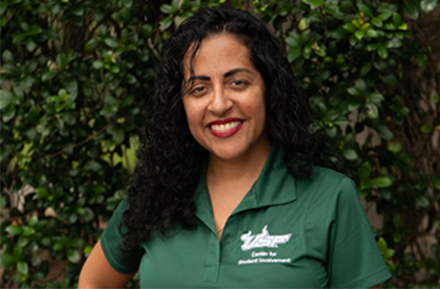 Mónica Lee Miranda, director of the Center for Student Involvement and inaugural president of Alianza Latina

“Our primary takeaway from our meetings and discussions is that important work remains to be done to effectively support USF’s Latinx/a/o community, and in particular, the faculty and staff we represent and serve,” said Mónica Lee Miranda, director of the Center for Student Involvement and inaugural president of Alianza Latina. “We are excited to move forward with our most critical and immediate goals to 1) create viable and active channels of communication and 2) advocate for faculty and staff equity and representation as it relates to salary, position, treatment, recruitment and retention. We look forward to doing so in partnership with our peer organizations and communities across USF, and with the invaluable and continued support from USF leadership, particularly the president’s office and the Office of Diversity, Equity and Inclusion.”

Also announced in October 2021, was the formation of the 15-member Advancing Latino Access and Success (ALAS) Task Force. With a membership of leaders from across USF and Tampa Bay, ALAS is focused on student success and building strategies to increase enrollment and degree completion rates while identifying challenges and opportunities unique to Latino students. 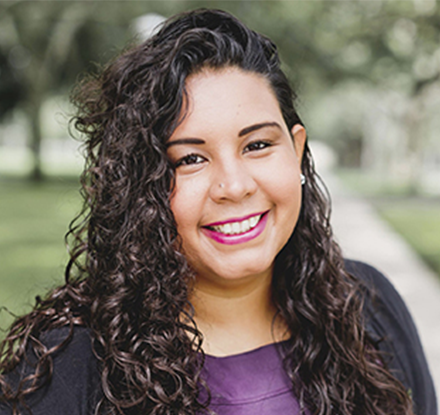 Neudy Carolina Nuñez, director of the Office of Multicultural Affairs

Supporting the success of Hispanic/Latinx/a/o students is also a priority for the Office of Multicultural Affairs, which has worked to formalize a space that affirms and celebrates the heritage and accomplishments of the Hispanic/Latinx/a/o community and provides programs, events and initiatives to strengthen community.

Neudy Carolina Nuñez was named director of the office in 2021 and shares that her cultural upbringing as a Venezuelan-Dominican Latina has greatly shaped her work at USF and her desire to positively influence the lives of other Latinx/a/o students.

“The unique challenges that first-generation Latina students face are often not apparent but emerge through a series of conversations that develop over time as our rapport increases and mutual trust and respect are created,” Nuñez said. “It has been a privilege for me to build so many close relationships with Latinx students at USF as a result of my role as the director of OMA.” 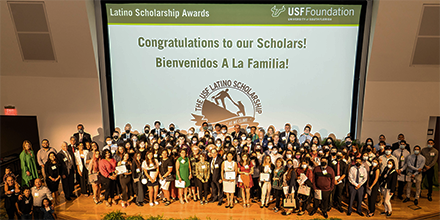 For first-generation Latinx students such as Valentina Arcila, USF’s Latino Scholarship Program has supported a pathway to pursue academic and career aspirations by providing financial support, mentoring and professional development.

The program also fosters a connection to community, something that was particularly important when the pandemic paused in-person activities.

“I was so grateful for the virtual workshops offered by the Foundation Scholarship Office for Latino scholarship recipients because I was still able to engage with fellow students and learn valuable professional skills,” Arcila said. “All my classes became 100% virtual, so these virtual workshops helped me stay motivated and engaged during those troubling times.”

Created in 1992 by the Latin Community Advisory Committee, the program celebrated its 30th anniversary in 2021 having enriched the lives of more than 600 scholars. The committee, led by the late Dr. Braulio Alonso, established LSP with the late Adela Gonzmart, Dr. Adrienne Garcia, and the late Dr. Remember Maceo-Gomez. 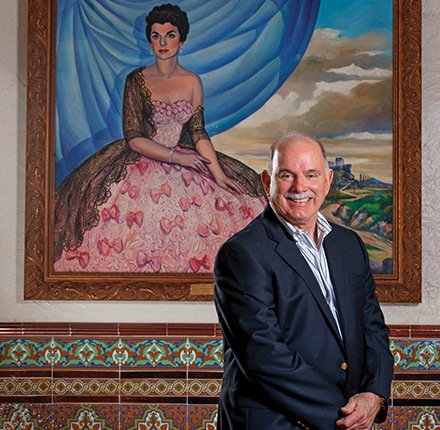 Adela’s son, Richard Gonzmart, the fourth-generation co-owner of the historic Columbia Restaurant, established the Adela and Cesar Gonzmart Endowed Memorial Scholarship in 2002 and to mark the Columbia’s 100th anniversary in 2005, created the Columbia Centenario Award. The two scholarships total more than $300,000. He created the Richard and Melanie Gonzmart Latino Scholarships in 2017, totaling another $300,000.

In addition to financial support, a long list of LSP alumni and supporters inspire the next generation of USF students with their outstanding contributions to community.

Among them are Grace Maseda Sainz (MS ‘14) and Anthony Perez (MBA ‘12) who will be honored in October as the 2022 Hispanic Woman and Man of the Year by Tampa Hispanic Heritage. The lifetime achievement award honors Hispanics who have contributed significantly to the success of Tampa Bay and improved the quality of life for Hispanics.

Maseda Sainz is an incoming board member for the USF Foundation and a vice president at Helios Education Foundation, which is a longtime supporter of USF’s commitment to student success for underrepresented populations. Perez is the founder of the non-profit organization, Covered Hearts.

In addition to their support of LSP, both have led USF’s Latin Community Advisory Council – Perez is the current chair – and have chaired the Mayor's Hispanic Advisory Council, a group of Hispanic citizens appointed by the Tampa mayor who serve as a liaison between the city government and the Hispanic community. The advisory council also supports LSP and maintains a strong partnership with USF and a shared focus on issues of importance to the Hispanic community.

In 2005, Jose Valiente (’73) was recognized as Tampa’s Hispanic Man of the Year. Valiente, who fled Cuba with his family in 1962, has been a member of the Latin Community Advisory Committee for 31 years. He and his wife Lourdes have also been donors to the Latino Scholarship Program, sponsoring seven students. Today, he leads the USF Foundation Board of Directors. 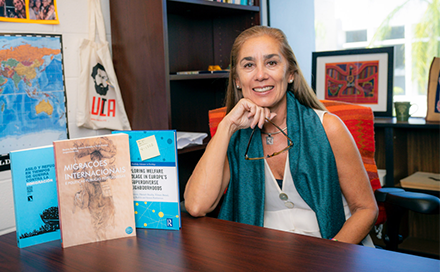 Beatriz Padilla, associate professor of sociology in the College of Arts and Sciences and founding member of Alianza

USF’s accomplished faculty include those of Hispanic and Latinx/a/o descent who are engaged in high-profile research.

Beatriz Padilla, associate professor of sociology in the College of Arts and Sciences and founding member of Alianza, has been working with Latinx/a/o students, including Afro-Latinx students, on research to map the ethnic and racial experiences of Latinx/a/o students, faculty and staff in higher education. Her research differentiates between people who were socialized and grew up in Latin America and then came to the U.S. and those who grew up in the U.S.

The topic has personal importance to Padilla, who was born in Argentina and came to the U.S. to pursue her graduate degrees in public policy and sociology. 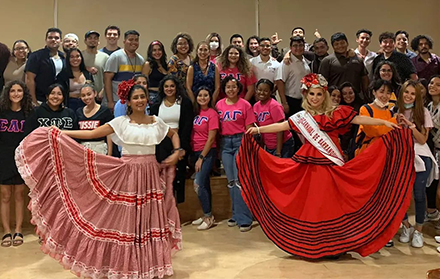 Padilla directs the Institute for the Study of Latin American and the Caribbean (ISLAC), USF’s interdisciplinary center of excellence focused on distinguished scholarship, teaching and outreach to improve life across Latin America, the Caribbean and among Latinx/a/o populations in the U.S. In addition to being a research institute, ISLAC offers academic graduate programs

ISLAC-affiliated faculty are at the forefront of projects that foster global understanding, address global issues, and prepare for an increasingly globalized world.

Among them is Elizabeth Aranda, professor of sociology, whose research focuses on migrants’ emotional well-being and how they adapt to challenges posed by racial and ethnic inequalities, legal status and other challenges associated with adaptation in a new place.

Aranda also directs the (Im)migrant Well-Being Research Center in the College of Arts and Sciences, a reflection of USF’s investment in Latinx/a/o faculty and their research. In February 2023 the university will host the Conference on (Im)migrant Well-Being, bringing together interdisciplinary scholars and community partners to examine research and policy focused on immigrant well-being.

Several ISLAC-affiliated faculty were also central to an effort led by the USF College of Public Health to combat misinformation about COVID-19 among the region’s Spanish-speaking communities. Salud Latina USF is a public health initiative that aims to address disparities among Latinx/a/o populations in Tampa Bay and across the U.S. and world. Its main pillars are: Latino student mentoring, research, community outreach and education and scholarly activities. Salud Latina USF offers monthly webinars to provide trusted information to Spanish speaking communities in the U.S. and Latin America. It started webinars to address misinformation around COVID-19, and has expanded to cover a wide range of public health topics, such as domestic violence, infectious and chronic disease, health disparities and social conditions, such as migration.