USF community celebrates MLK through a week of service projects, lectures and other activities

Gratitude for the life and legacy of Martin Luther King Jr. is being felt across Tampa Bay through a variety of service projects, panel discussions and a commemorative brunch hosted by the Office of Multicultural Affairs.

USF students will kick off MLK Commemorative Week by volunteering at 15 locations, including area food pantries, community gardens and organizations that embody King's commitment to service. The Stampede of Service initiative provides volunteer opportunities focused on UN Sustainable Development Goals, which were developed to address global challenges, such as poverty, inequality, peace and justice. 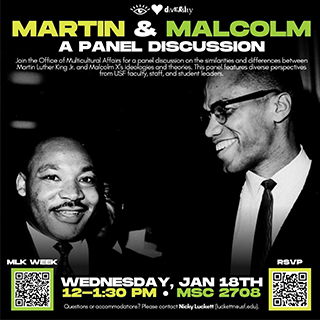 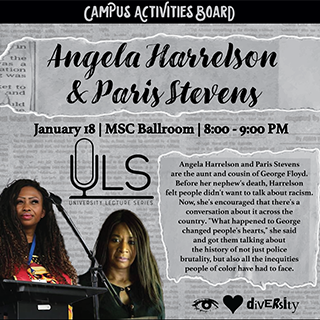 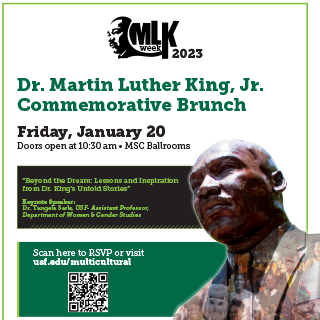 As part of the University Lecture Series, Angela Harrelson and Paris Stevens – aunt and cousin of George Floyd – will discuss the importance of social justice and continued activism. A separate panel discussion features diverse perspectives on the differences and similarities between the ideologies and theories of King and Malcolm X. 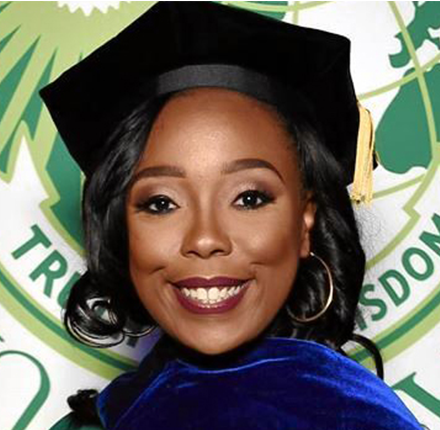 Tangela Serls, special advisor to the College of Arts and Sciences dean on diversity, equity and inclusion

Tangela Serls will serve as keynote speaker of the brunch, where she’ll share the lesser-known stories of the civil rights movement, such as how King battled undiagnosed mental illness, which was exacerbated by the demands of his life as an activist, and how King inspired her career.

“As a womanist literary scholar and educator, I was driven to pursue my field of study because I believe literature, and more specifically literature by Black women, can be a powerful tool to bridge differences between and among marginalized and underrepresented groups,” said Serls, special advisor to the College of Arts and Sciences dean on diversity, equity and inclusion. “As a Georgia native, I have several memories that remind me of Dr. King’s legacy. As a child, I remember taking field trips to Atlanta to visit the King Center. I also participated in oratorical and essay writing contests that were named in his honor. I’d say his legacy as an orator, a dreamer, and a fierce activist for justice has unequivocally influenced my life and career.”

As part of MLK Day of Service, the Office of Diversity, Equity and Inclusion on the USF Sarasota-Manatee campus has partnered with the Judy Genshaft Honors College to provide 150 personal hygiene kits to help the homeless through Turning Points in Bradenton and The Salvation Army in Sarasota. 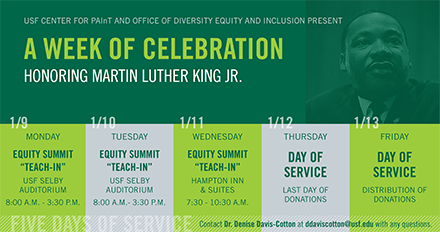 Also on the Sarasota-Manatee campus, the Florida Center for Partnerships in Arts-Integrated teaching (PAInt) is hosting a week-long “teach-in,” which will provide the USF community and other educators and teaching artists to discuss arts integration practices based on King’s quotes and speeches, as well as the T.R.U.T.H. Framework to Advance Inclusive and Equitable Pedagogy in Education.

“This teach-in is important because it focuses on how to advance Dr. King’s legacy by exploring opportunities that promote his teachings and vision for a better world. The teach-in is a way for participants to connect his message, voice, wisdom and insight,” said Denise Davis-Cotton, director of PAInT.

At USF St. Petersburg, more than a dozen middle and high school students from Pinellas County were honored during the Dr. Martin Luther King Jr. Award Banquet. They were selected by a committee of Pinellas County school leaders for their commitment and dedication to community service, social justice and civil rights, as well as perseverance in overcoming challenges.

Additionally, 65 students, faculty and staff members are expected to participate in the city of St. Peterburg’s Dr. Martin Luther King Jr. Day Parade. They’ll be riding in a float, which consists of a boat from campus recreation.

MLK Commemorative Week runs Jan. 16-21. Events are free to the public and registration for the brunch is required. Additional information can be found here.