The Office of Veterans Success Celebrates Student Veterans at USF 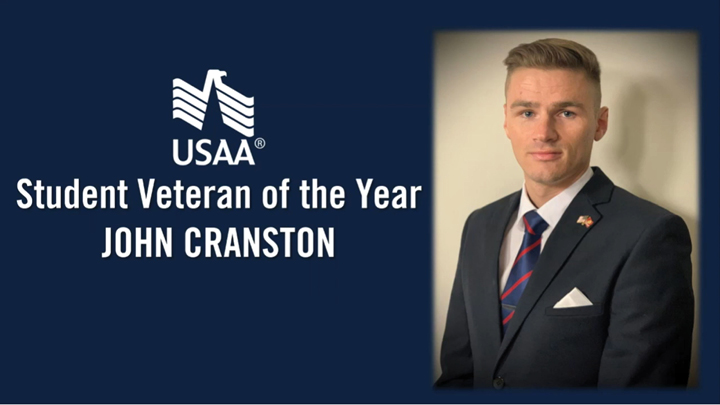 From November 9 -13, USF and the Office of Veterans Success (OVS) honored its veterans with a weeklong Veterans Week Celebration. The event, “We March as One” celebrates all three campuses working together to serve USF’s student veterans.

Each day during Veterans Week, OVS highlighted stories of students, faculty, and staff, why they chose to join the military, what the military means to them and how they continue to serve. Listen here to interviews of USF's student veterans.

At the 5th Annual Honor-A-Bull Awards and Graduation Ceremony, OVS recognized high performing student veterans who have demonstrated success on campus, both academically and personally. The individuals who nominated the winners each shared what stood out about the winner.

“He truly is the epitome of what we expect of our leaders in the community and the military” said Major Larry Black, Jr., executive officer and marine officer instructor, Navy ROTC, of the USAA Student Veteran of the Year award winner, US marine, John Cranston.

USF Bulls will take on the Navy at the upcoming “Salute to Service” football game on *Saturday, November 21st at Raymond James Stadium.  This special celebration will feature a show of support for veterans.  Throughout the game, fans will hear stories from veterans through pre-recorded videos  and 100 ROTC students in uniform representing all branches of the service and the Joint Color Guard.

The “Hero of the Game”, U.S.  CentCom commander, General Kenneth F. MacKenzie, Jr., a four-star Marine General will be presented the game football by the ROTC Joint Color Guard.

USF continues to be recognized as a top university for veterans. The Office of Veterans Success was established 11 years ago to provide a seamless transition for our nation's veterans from military life, through campus life into a meaningful career by providing high quality services and opportunities for academic success, personal growth, and professional development.

*This game will be rescheduled.

Learn more about the Office of Veterans Success here.