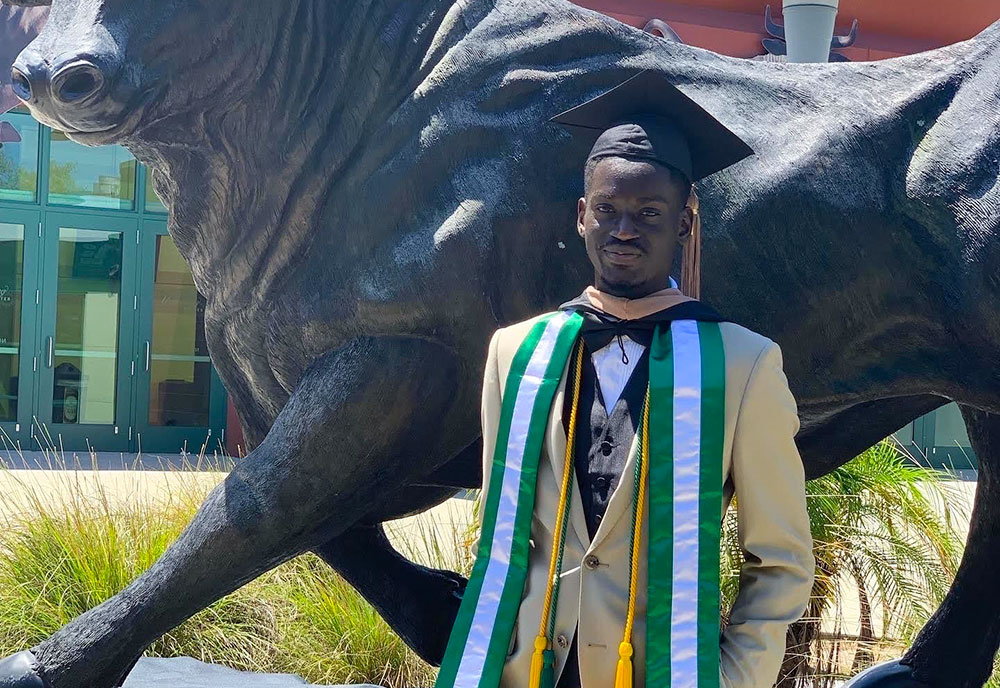 Alumni Spotlight: From track and field to esports, ‘You have to love what you do’ says Toluwani Adebakin

TAMPA -- Toluwani Adebakin grew up in Nigeria and loved to run. With pure talent and the support of his family and coach, Adebakin’s athletic ability grew exponentially as he got older. His love for running has opened doors for him, and in turn, he has dedicated himself to creating opportunities for other athletes.

During his senior year in high school, he started a blog to raise awareness of Nigerian track and field athletes, because the more he achieved, the more he wanted others to do the same.

The summer after he graduated, he decided to expand his blog. At age 19, he co-founded Athletic Heat, a company dedicated to developing awareness of Nigerians in the sports industry. The company produced the first ever track and field awards in Nigeria, and today, it is one of the largest athletic media management companies in West Africa.

The University of South Florida alumna said he always envisioned sports would play a central role in his future. In fact, that early love for running, and the sense of achievement gained through sports, has continued to influence his life and career to this day.

In May 2022, Adebakin graduated from USF’s Vinik Sport & Entertainment Management program with dual degrees — a master’s degree in Sports Entertainment and an MBA. At USF, he competed in track and field his first year and holds the school’s 4x400 meter relay record, set in 2021.

From the comfort of his dorm room at Anderson University, Adebakin was able to raise over $1 million in sponsorships for Nigerian track and field athletes by hosting four editions of the first ever track and field awards in Nigeria. At Anderson, he was named the Heartland Collegiate Athletic Conference Indoor Track Athlete of the Year.

After transferring from Anderson, he spent his next two years of college at William Carey University in Mississippi where he continued to excel in athletics, academics and athlete management.

He also expanded Athletic Heat into a new branch of Athlete Management, which managed two world record holders in track and field. While managing his own company from a remote location, he was inducted into the Sigma Beta Delta business honor society ranking in the top 20% of all business majors at William Carey and received a perfect score on the Comprehensive Business Exam. As he continued to excel in managing an athletic company, and acing school, he also continued track and field.

While creating opportunities for other runners, he won a National Championship in the 4x400 event and five All-American medals in track and field.

During his time at USF, Adebakin had many internships, but one he says was his most impactful was with the Tampa Bay Lighting. He said interning with one of the most beloved sports entertainment companies in Tampa helped him grow professionally and taught him how to work with different audiences, which would later help him expand his own company, Athletic Heat, into different markets.

It was at USF where Adebakin’s involvement in esports flourished, as well as his commitment to increase its exposure in Nigeria.

He partnered with Esports College and Career Pathways, USA, to provide esports guidance to schools and parents in Nigeria. He also set up high school clubs dedicated to promoting esports by inviting coaches and scouts to talk to students. He also planned and hosted the first Nigeria eSports Forum, which featured guest speakers from schools all over the U.S.

He currently works as the head of strategic partnerships at Dilemma Esports & Entertainment, an esports team and a meta-verse agency.

“The industry is growing at a rapid pace and Tampa esports is really strong and open to collaborations. People want to build together,” he said.

With all his achievements, he continues to persevere and keep working to help others. When asked about the one thing he would tell all students today, he said, “You have to love what you do and enjoy what you love.”

He has never lost his love for running and is excited to see where athletics takes him next.