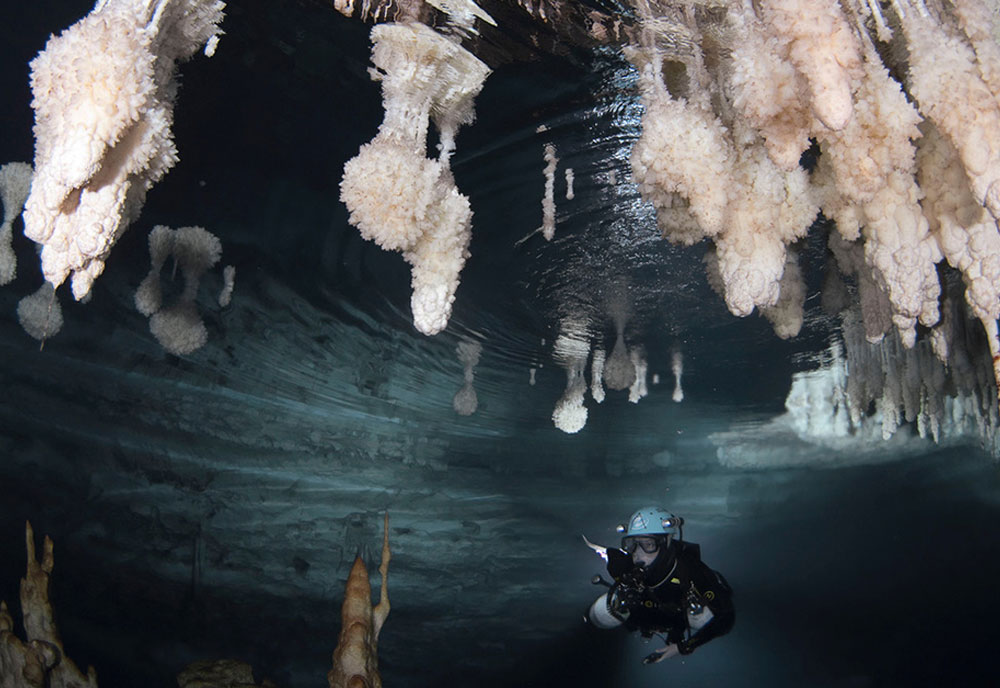 Underwater caves on the Mediterranean island of Mallorca are yielding climate secrets from an important era when sea levels were higher than they are today, potentially foreshadowing what is to come amid climate change, reports a team of scientists that includes USF Geosciences Professor Bogdan Onac.

In a study that graces cover of the November issue of Nature Geoscience, an international team of researchers from USF, the University of New Mexico, the University of Balearic Islands (Spain), Boston College, University of Iowa, and University Rome Tre (Italy) uses unique cave formations on the Spanish island called phreatic overgrowths on speleothems – known as POS. These can only form in coastal caves at the water surface, making them an accurate marker for sea level as time goes by.

To collect the scientific evidence, Onac and fellow researchers entered or/and dove into the caves to collect samples and measure their elevation. The mineralogical and crystallographical investigations on the mineral samples were performed at Onac’s lab on the Tampa campus and Fornós’s lab at the University of Balearic Islands, whereas uranium dating to determine the ages of the formations was performed at the University of New Mexico labs of Professors Yemane Asmerom and Victor Polyak. The team then used nine different glacial models to evaluate the new data and make their findings.

In past climates, glacial periods were interrupted by warm climate intervals that significantly melted the large ice sheets roughly every 100,000 years. Sea level increases during these warm periods are known as interglacials.

The research found that the phreatic overgrowths on speleothems from that period are a more accurate record of sea-level change than corals, which has been studied worldwide as a potential indicator of such past fluctuations. And with these newer and more accurate ways to measure past change, the scientists are reevaluating predictions on how sea levels might rise in the current era of warming.

‘‘This is alarming, because it suggests that if global temperatures continue to rise, sea levels could eventually reach higher than scientists previously estimated,“ Onac said.

For the last 12,000 years, Earth has been in the Holocene interglacial period. The researchers say their work now establishes a better understanding of what occurred in the last interglacialperiod: warming temperatures caused the melting of the polar ice sheets early in the interglacial period, followed by gradual ice sheet growth and sea level drop. Previous studies have put sea level rise during this past warm period between three and 15 meters.

“We wanted to better understand the magnitude, timing, and stability of sea level, since such information is critical for future projections of sea level change under a 1.5 to 2ºC global warming scenario,” Onac said. The research was prominently featured on the cover of Nature Geoscience.

“The results suggest that if the pre-industrial temperature will be surpassed by 1.5 to 2ºC, sea level will respond and rise two to six meters (7 to 20 feet) above present sea level.”