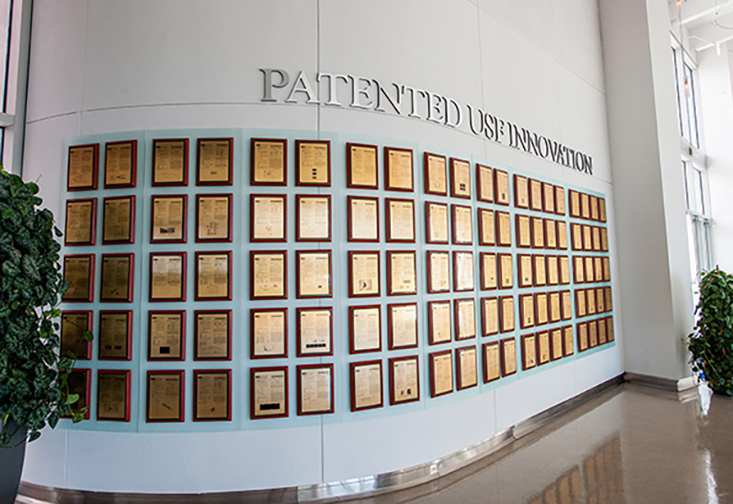 The University of South Florida is the nation’s fifth leading public university in generating new United States utility patents and ranks 12th among universities worldwide in this key measure of innovation, according to rankings released Tuesday by the National Academy of Inventors (NAI) and the Intellectual Property Owners Association (IPO).

With 116 new utility patents issued in 2017, USF continues to stand with some of the world’s most prestigious institutions in the highly competitive arena - including innovation powerhouses such as the University of California System, Massachusetts Institute of Technology, Harvard University and Stanford University. On a global scale, this is the eighth year USF has ranked in the top 20.

USF earned two more patents in 2017 over its previous record of 114 in 2016. USF was first among Florida’s universities, which collectively ranked highly among the world’s centers of academic invention.

“We are in an era when the public increasingly looks to research universities as a key driver of global innovation. USF’s strong emphasis on invention creates benefits far beyond our campus,” USF System President Judy Genshaft said. “Each day, our students, faculty and staff bring incredible new ideas to life and apply their talents in shaping a better future for all.”

The ranking is the latest marker of success for USF’s efforts to translate academic research into new technologies, medicines and products, and has fueled the university’s growing national and international reputation. The rankings coincided with Tuesday’s start of the Times Higher Education Young Universities Summit at USF, which is drawing scores of academic leaders from universities around the world founded during the last 70 years. USF is the first North American university to host the prestigious summit.

USF’s rise up the patent rankings comes through strategic and dedicated support for building an integrated technology transfer effort. In addition to supporting a vibrant research environment, the USF System provides faculty, students and staff with institutional support to patent and license their inventions; gives faculty members credit in the tenure and promotion process for inventions and creating startup companies; and provides guidance and early-stage funding opportunities for startup companies. Students and faculty have access to programs such as the National Science Foundation’s Innovation Corps and the USF Student Innovation Incubator to support them as they entrepreneurial efforts around their inventions.

“USF is part of a global community of dynamic institutions who are leveraging scientific and technological discoveries to create new jobs, new companies and even new industries,” said Paul R. Sanberg, USF’s Senior Vice President for Research, Innovation & Knowledge Enterprise. “Inventors and innovators fuel the growth of the global knowledge economy, and we have built a strong institutional culture to support their efforts. As the only research university in the Tampa Bay Region, our economy and our community grow stronger with each new idea that becomes a patented invention.”

The patented technologies in USF’s record-setting year feature a wide range of inventions, including robotics, mobile detection in blood samples, chemicals used for the treatment of Alzheimer’s disease and a novel smart material that changes color rapidly without any external energy stimulus.  More information about each of these patents is available upon request.

The NAI and IPO have published the report annually since 2013 to highlight the vital role patents play in university research and innovation. The report ranks the top 100 universities named as the first assignee on utility patents granted by the USPTO during the 2017 calendar year.

The full report is available here.