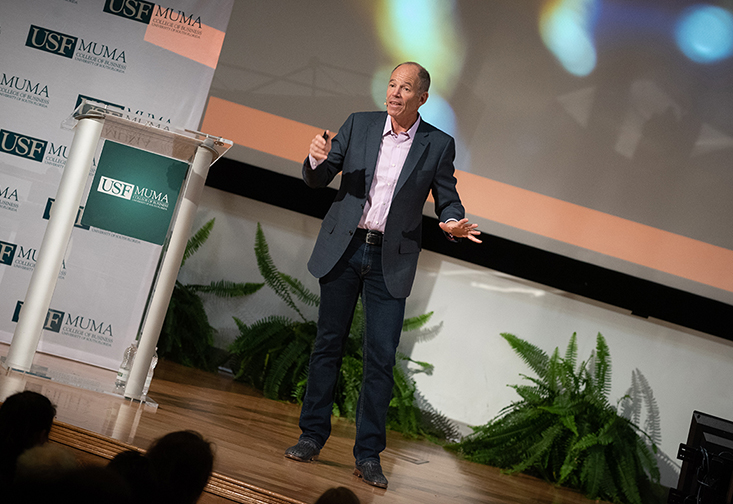 “Some of the more successful entrepreneurs are not A students or even B students,” he said. “They are the C students.”

The key is to have an idea, to have a tolerance for risk and to have confidence, he said. And don’t be afraid to make mistakes. They certainly will come.

Randolph started a business that now dictates how the world consumes entertainment. His idea back in the 1990s, to send movies on DVD through the mail to subscribers, has morphed into one we all know today: Netflix, the leading source of online streaming of movies, television, documentaries and much more. No longer do people have to wait until 7 p.m. to go to a movie. They don’t have to suffer through game shows to watch their favorite television programs. Now, they can binge-watch entire seasons of a show in a weekend and whet their palates with dynamic original programming that racks up awards year after year.

Randolph, cofounder and former CEO of Netflix, held court in the Oval Theater of the Marshall Student Center, with a crowd of business leaders, alumni, students and faculty. He recounted how he and Reed Hastings started out in their fledgling business back in the late 1990s, often making risky choices and bad decisions until they hit on the formula that stuck.

When they came up with an idea to rent and sell DVDs through the mail, he told his wife about it.

“She thought it was the stupidest idea she had ever heard,” Randolph said.

He told the story about how the young and struggling Netflix effort, already $50 million in debt, was approached by Blockbuster Video with a plan to buy it out. When Randolph and Hastings said they wanted $50 million for their venture, enough to cover the debt, Blockbuster balked, he said. Some would have packed it in, but Randolph and Hastings decided to take it to the chain that was chalking up $6 billion in revenue. And, eventually, Netflix played a hand in bringing about the demise of Blockbuster.

When young entrepreneurs hear that story, he said, they are encouraged. But not everyone hears the story the same way.

“The corporate people saw this story differently,” he said. “They saw it as you don’t know who is coming after you. If you’re unwilling to disrupt yourself, you are leaving yourself open for someone to come in and disrupt you.”

He talked about those seminal days of entrepreneurship and his other forays into startups before and since his involvement with Netflix; he chatted about his angel investing and how he has difficulty turning down young entrepreneurs looking for his investment.

“I’m proud of my optimism,” he said. “I’m a true believer. I’m not a glass-is-half-full optimist. I’m a glass-is-overflowing optimist.

“It’s a character flaw,” he said. “I like every idea I hear, which is not a good formula for being an angel investor.”

The Muma College of Business Thought Leader Series was established last year to draw nationally recognized speakers, innovators, idea generators, entrepreneurs, philanthropists and "turn-around artists" in business and industry for informal talks that include questions from the audience. Like the inaugural speaker last year, Steve Wozniak, cofounder of Apple, Randolph fit all the qualifications.

Randolph stayed on as CEO of Netflix until 2002, the year it went public. He remained on the board of directors until 2004 when he retired to pursue other business interests. He said he was more interested in startups than working to keep a business growing and now, he is a sought-after keynote speaker on entrepreneurship and other business related topics.

In 2012, Randolph cofounded the analytics software company Looker Data Sciences and currently is an advisor for numerous other startups, serving as a mentor, executive coach and/or board member. He also works with young entrepreneurs and is a trustee of the non-profit National Outdoor Leadership School and the environmental advocacy group, One Percent for the Planet. Some other points he me made:
On having a hand in changing the way the world experiences entertainment: “I don’t’ feel that it makes my life different. I take great pride in what Netflix has done. We hope it makes it, that it breaks through and certainly Netflix has broken through in ways I never would have imagined. It has changed how entertainment is made and consumed. It’s a pretty dramatic thing.”

On people asking him about Netflix, though he’s been gone for more than a decade: “No, I’m not annoyed. It’s not a surprising thing. A lot of people know me for all the other things I have done. I try not to gloat about the Netflix thing, I don’t’ wear it on my sleeve.”

On the thread that runs through his keynote speeches: “The thread I try to put into all my talks is that you can do this. Every single person has an idea. Every person has a dream, but most don’t know where to start. They can count hundreds of reasons why it’s impossible. My mission is to enable people to take the dreams they have and really make them work.”

On where he is now in his career: “I’m the luckiest guy in the world. I have what everyone strives for, which is balance. I am scratching the itch of entrepreneurship. I recognize that I don’t have it in me to do another startup again but I fill that hole by working with young entrepreneurs. I solve really interesting problems with really smart people and then, I can go home at night.”

On running out of ideas: “No, I may have worried about that some 30 years ago, but I now know ideas are in an almost limitless supply, I think I worry more about running out of decisions. My theory is that everyone is born with a finite number of decisions and, as entrepreneur, I may have run out of my supply, So I’m delighted when we’re out to dinner and someone else decides on what I’m going to eat.”