Students and faculty from the University of South Florida have had unprecedented access to the Pasco County Detention Facility in order to conduct screenings and interview inmates entering the county jail. It’s part of a long-term project led by Bryanna Fox, PhD, assistant professor in the Department of Criminology, and Edelyn Verona, PhD, director in the Department of Psychology, in close partnership with the Pasco Sheriff's Office.

Student research assistants apply textbook lessons about criminal behavior into real-life experience by collecting data themselves. The one-on-one interviews will help determine a host of factors including the inmate’s IQ, childhood trauma, traumatic brain injuries, and psychopathic tendencies to better understand what traits may lead to repeat incarceration.  The goal is to build a dataset of risk factors, such as problematic personality traits, drug use, or mental health issues, that increase the risk of future criminal activity. In addition, the researchers use the personal stories provided by inmates to determine if certain aspects of the inmates’ childhood experiences, societal issues, and others, may be correlated to their criminal behavior. 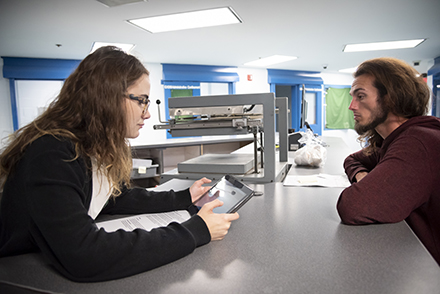 “We really learn about the lives of the individuals and learn about the circumstances that have led them to where they are now,” said Lauren Miley, a graduate student in the Department of Criminology in the College of Behavioral and Community Sciences.

Pasco County Sheriff Chris Nocco sees these factors as health care issues that need to be addressed. His goal in this collaborative project is to identify the common problems that can be addressed early on to prevent adult offenders, and match inmates with resources to reduce their risk of incarceration. With data about an inmate’s childhood, societal issues may be correlated to criminal behavior.

“Unfortunately, the system is fragmented,” said Nocco. If learning disorders or lack of education or parental support are found to be predominant in inmates, the Sheriff’s Office can work with local agencies to address these conditions earlier in life. “So, when they become adults, they don’t commit crimes.”

According to Pasco County Detention Center officials, drug-related arrests are on the rise in tandem with a fast-growing population. Lieutenant Warren Jones recalled housing around 300 inmates in 1993 but currently there as many as 1,700 men and women detained. While there is a plan in place to expand housing units, there is also hope that by identifying and treating the issues the inmates are facing, the rate of re-offending will decrease.

This time-intensive study is expected to continue over the next few years. Currently there are two phases of data collection in the study. The first part is a risk assessment completed shortly after an arrest. The second phase is an hours-long clinical interview conducted by graduate students and Dr.’s Fox and Verona.

This study is a first-of-its-kind for the Pasco Sheriff’s Office and the academic field. Most studies of this nature are conducted in prisons, which house only those convicted of felonies, and omit the majority of people arrested for lesser but far more common offenses. Jails detain more transient populations, as well as those awaiting trial for felonies, and have many recurring offenders.

“The vast majority of people are sentenced to jail first, so we actually have a much bigger population, but much less information about their needs and risks,” said Fox who previously conducted research in the FBI’s Behavioral Science Unit. “There’s a lot of variation in the type of people coming through there and we want to understand what brought them there in the first place.”

Fox has been expanding her research on offender profiling and risk assessment while at USF. Her work has had considerable impact in solving burglaries and reducing violent crimes in the community. Fox also trains law enforcement agencies nationwide to categorize crimes and suspects.

This hands-on research experience is modeled in part after the famed study conducted by special agents in the FBI’s Behavioral Science Unit, who interviewed 36 serial killers to better understand the background and risk factors associated with the prolific offenders. Fox is a former FBI special agent who sees the benefit of behavioral science research for policing.

“That was the impetus for me,” said Fox who now aims to apply her research and law enforcement experience to a “far more common type of offender.” 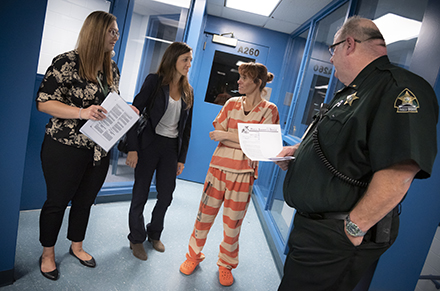 This project is providing an ongoing opportunity to develop impactful research that can contribute to safer communities in Pasco.

"We are excited about starting this project,” said Verona. “We believe that with more resources provided to help with re-entry of inmates into the community, the fewer resources we have to expend later to continue to incarcerate them, particularly since jails have become the new mental hospitals of the 21st century.”

The study will continue on for the foreseeable future. Researchers are working to secure grant funding to expand the project and address potential resources and tools to help repeat offenders rehabilitate. They hope to use knowledge on the risks factors and needs of the inmates match them with appropriate treatment and resources post-release. The goal is to help resolve some of the issues they are facing, such as substance addition, mental illness, and personality or cognitive functioning to help prevent them from future offending and returning back to the jail ever again.

College of Behavioral and Community Sciences