Modern academic regalia evolved from the kinds of apparel worn by monks and students in the 11th and 12th centuries to keep warm in the medieval castles and halls in which they studied. Academic life as we know it today began in the Middle Ages — first in the church, then in the guilds. The teaching guild was the Guild of the Master of Arts, and the Bachelor was the apprentice of the Master. Their dress was the outward sign of stature and responsibility. Academic regalia was thus a visible manifestation — in color, pattern and design — that unified those of common discipline and like purpose. In later centuries, to preserve the regalia’s dignity and meaning, universities set rules of academic dress. American universities agreed on a definite system in 1895, establishing a code of approved attire. In 1932, the American Council on Education revised this code, which, for the most part, governs the style of academic dress today. The principal features of academic dress are three: the gown, the cap and the hood.

THE GOWN — The gown has become symbolic of the democracy of scholarship, for it completely covers any dress of rank or social standing. The sleeves of the gown indicate the level of the degree held by the wearer. A long, pointed sleeve indicates the bachelor’s degree. The master’s gown has an oblong sleeve cut in an arc, with a slit at either the upper arm or wrist. The USF doctor’s gown has bell-shaped sleeves and three black bars on the sleeve. The doctoral robe also has the seal of the university on the velvet facing.

THE CAP — The freed slave in ancient Rome won the privilege of wearing a cap, and so the academic cap is a sign of the freedom of scholarship and the responsibility and dignity with which scholarship endows the wearer. Old poetry records the cap of scholarship as a square symbolizing the book, although other authorities claim that it is a mortar board, the symbol of the masons, a privileged guild. The color of the tassel on the cap denotes the discipline. The tassels on the caps (mortar boards) worn by the faculty may be black or a color indicating the degree. Those who hold a doctoral degree may wear a gold tassel. It is traditional for degree candidates to wear their tassels on the right and for those holding degrees to wear them on the left. Graduates transfer their tassels to the left after conferring of the degrees by the President. 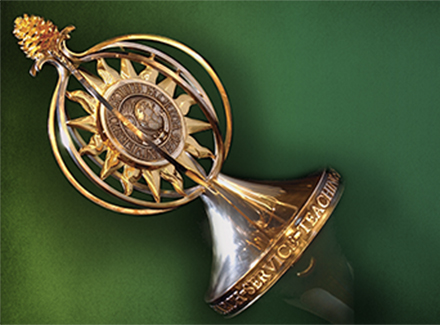 THE MACE — The USF mace is a ceremonial staff similar to those used by many institutions of higher learning to show the right to grant degrees to graduates. The mace is used during all Commencement ceremonies and is carried by the President of the Faculty Senate. Our mace includes a gold pine cone at its top to represent growth and continuity. Eight silver semicircles, which support the pine cone, stand for the eight colleges in existence at USF when the mace was commissioned in 1998. When not in use, today’s mace is displayed in the foyer of the President’s office. The original university mace is on display in the Alumni Center.

THE MEDALLION — The medallion worn by candidates for the bachelor’s degree identify those graduating with honors based upon GPA.

THE HOOD — The hoods are lined with the official colors of the institution conferring the degree. They are edged and bound with velvet of the color appropriate for the degree. At USF, the lining of the hood is green with a gold chevron, representing the university’s colors.

THE COLORS — In regalia, academic disciplines are noted by color. These colors can be found on undergraduate and masters tassels and on master and doctorate hoods on the velvet edging.

CNN: The debate over masks today is a lot like the decades-long fight to mandate seat belts