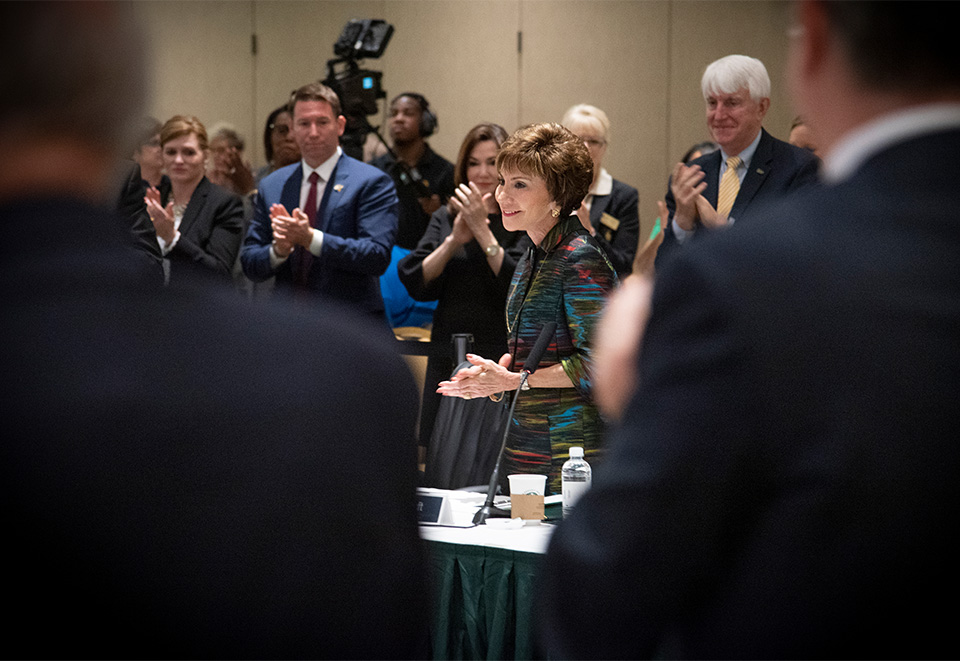 President Judy Genshaft receives a round of applause during her final Florida Board of Governors meeting as leader of the USF System.

The University of South Florida ranks as one of the top three performing institutions in the State University System, based on key indicators identified by the Florida Board of Governors (the Board). All state universities are measured by this 10-metric performance funding model, which evaluates institutions on a range of categories – including graduation rates, graduate wages and degrees awarded in specific fields that help meet the state’s workforce needs. The performance scores, released this week by the Board, show USF improved in nine of 10 metrics over the previous year.

“As a Preeminent Research University, the University of South Florida is proud of the role we play in fueling the state’s continued economic growth and prosperity,” said USF President Judy Genshaft. “Our leadership in student success ensures that our students graduate with the skills and experiences they need for productive careers – which in turn provides Florida with a strong talent pipeline that has an impact for generations to come.”

Compared to all other state institutions, USF places first in the categories of Bachelor’s and Graduate Degrees Awarded within Areas of Strategic Emphasis, a term defined by the Board. With more than 70 percent of graduates employed or enrolled in graduate school within one year of graduation, USF trails only the University of Florida in this important metric. USF ranks third in 4-Year Graduation Rate, which the university has increased by 15 percent over the past five years, the largest improvement in the state.

USF also sits third in Average Cost to Students, which decreased by 45 percent in 2017-18, due largely to increased support from additional state and federal funds for grants and scholarships.

“USF has an intense focus on student success, resulting in impressive gains on graduation rates, affordability and connecting students with jobs,” said Marshall Criser, State University System Chancellor. “I commend President Genshaft for her commitment, and look forward to the university’s continued momentum.”

USF will receive its proportionate share of $560 million in performance funds, divided among institutions in the SUS for the 2019-20 fiscal year.

Board of Governors, Board of Trustees