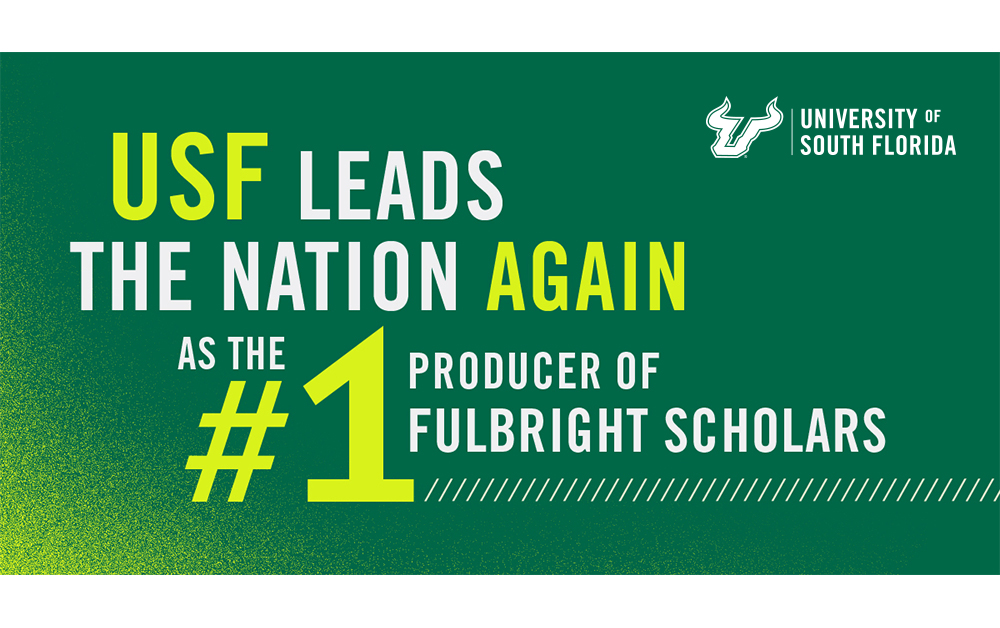 The Chronicle of Higher Education first announced the top producers this morning, highlighting USF as the only institution in America to have 10 or more scholars this academic year. This is USF’s second time leading the nation, having finished No. 1 in 2016-17.

“This is a magnificent accomplishment,” said Dr. Roger Brindley, USF System Vice President for USF World. “As the top producer for the remarkably competitive Fulbright Awards, USF has repeatedly demonstrated that it is one of the most globally engaged universities in the United States. Thanks to the dedication of our faculty, USF’s global footprint is consistently expanding, fostering the growth of our students as global citizens.”

Recipients of the prestigious Fulbright Awards earn the opportunity to teach and conduct research abroad with the goal of cultivating mutual understanding between the United States and other countries. Upon returning, faculty integrate their experiences into USF classrooms through their curriculum.

USF’s 12 Fulbright Scholars traveled to 11 different countries, and represent a wide range of research backgrounds, such as big data, mental health, nursing and family law reform. Of the scholars, four are from the USF Muma College of Business including Dean Moez Limayem, who received an Administrative Fulbright Scholarship to study the higher education system in Japan.

“I can say from my own personal experience that the opportunity to travel and conduct impactful, insightful research with partners around the world not only adds an enhanced understanding of cultural collaboration, but also provides a rich and nuanced texture to our own careers and lives,” Limayem said. “In the long run, building these global relationships with other institutions benefit our faculty, students and the Tampa Bay region at large.”

Launched in 1946, the Fulbright Program has provided over 390,000 participants—chosen for their academic merit and leadership potential — with the opportunity to exchange ideas and contribute to finding solutions to shared international concerns. More than 800 U.S. college and university faculty and administrators, professionals, artists, journalists, scientists, lawyers and independent scholars are awarded Fulbright grants to teach and/or conduct research annually. The Fulbright U.S. Scholar Program operates in over 125 countries throughout the world.

The Fulbright U.S. Scholar Program is a program of the U.S. Department of State, funded by an annual appropriation from Congress to the Bureau of Educational and Cultural Affairs, and supported in its implementation by the Institute of International Education.