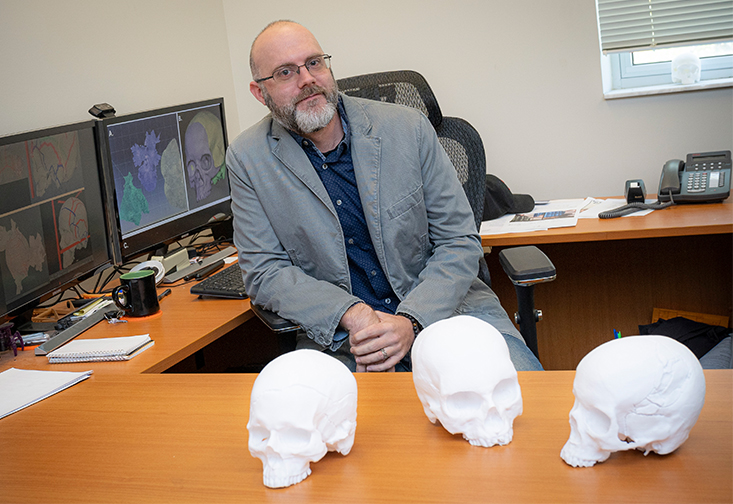 The digital reconstructions of three human skulls created at the University of South Florida are being used as evidence in a high-profile murder trial in California.

USF Advanced Visualization Center Manager Howard Kaplan was hired by the Riverside County district attorney to create and 3D-print the skulls of three men bludgeoned to death in 2015. Kaplan was subpoenaed as an expert witness to appear at the criminal trial against 26-year-old Brandon Willie Martin, who’s accused of beating his father, uncle and another man to death with his personal baseball bat. Martin is a former minor league baseball player in the Tampa Bay Rays organization.

Kaplan developed a technique for creating 3D models of the skulls with associated trauma by using photographs of the victims prior to their deaths, photos taken at the crime scene and photos gathered during their autopsies. Digital reconstructions created for identification purposes are usually built by scanning one’s skeletal remains. However, Kaplan was limited to using photographs to demonstrate facial and cranial trauma since the trauma was too severe and the victims’ remains were unavailable. 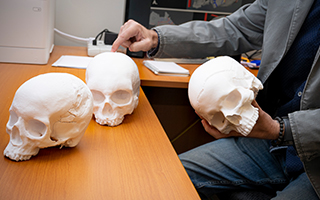 “This is the first time this technology has been used in a homicide trial,” Kaplan said. “Using the 3D-printed skulls will allow individuals, such as the jury, to better visualize the injuries since they provide a tangible 3D representation of each of the victims.”

Each skull took more than 40 hours to complete. The process started by taking anatomical measurements of the victims’ facial and cranial features through photographs. Kaplan used that data to create digital models of the skulls with the assistance of template skulls that were similar in age, height, weight and ethnicity to the victims. Photographs of the trauma were then uploaded into the system so the 3D models could reflect the location and extent of the victims’ injuries. The digital models were then 3D printed.

“The Riverside County District Attorney’s Office is very appreciative of Howard Kaplan’s work in creating the 3D skulls and believes they will greatly aid the forensic pathologist in describing the injuries sustained by the victims and will give the jurors a more tangible and visual understanding of those injuries,” said Deputy District Attorney Michael Kersse.

Martin was the 38th overall draft pick when he signed with the Rays organization in 2011. He was released from his contract in 2014, prior to being arrested for homicide.

“I hope this technique provides law enforcement agencies with insights into the technologies that are available and how to best capture the necessary data (photographs, documentation, etc.) should these types of reconstruction need to be created in the future,” Kaplan said.

NBC News: Should you get a coronavirus test before seeing friends and family?

Business Insider: The U.S. could be on track to hit 1 million daily coronavirus cases by the end of 2020, a new report finds