Invasive in the U.S., lifesaver Down Under 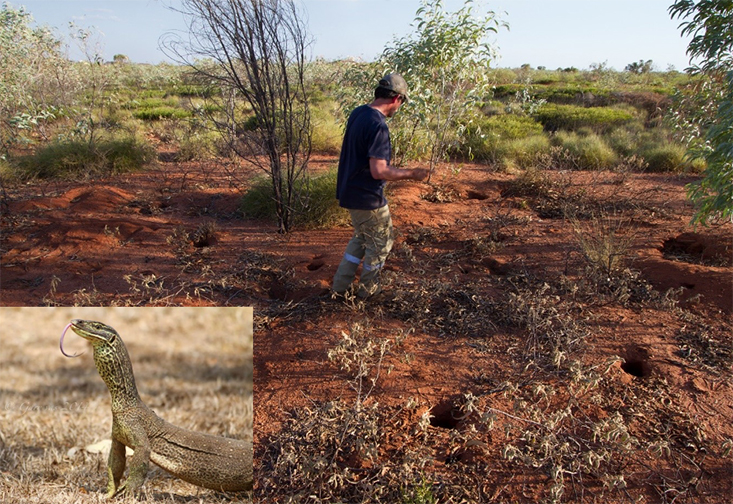 Ten years of research led by the University of South Florida has revealed that a monitor lizard should be regarded as an “ecosystem engineer,” a rarity for reptiles. Tortoises and sea turtles are the only reptiles considered to be ecosystem engineers, a term used to describe organisms that have a great impact on their environment based on their ability to create, modify, maintain or destroy a habitat. Sean Doody, assistant professor and graduate director of integrative biology at the USF St. Petersburg campus, discovered that while a related species is considered invasive in the United States, in Australia, small animal communities rely on the monitor lizards’ burrow system, called a warren, using it as a habitat, a place to forage for food and nesting.

In his study published in “Ecology,” Doody and his Australian collaborators investigated the nesting biology of the Yellow-Spotted monitor lizard, which can measure nearly five feet, and its smaller, sister species, the Gould’s monitor lizard. The team had recently discovered that the lizards are unique in that they lay their eggs as deep as 13 feet, easily the deepest vertebrate nests on earth. They loosen the soil, creating warm, moist conditions, which are ideal for laying eggs and trapping viable seeds and fruits. But now, the researchers have discovered that the burrows hosted a wide range of animals, including reptiles, frogs, insects and even marsupial mammals. The team found 747 individual species of 28 types of vertebrates. 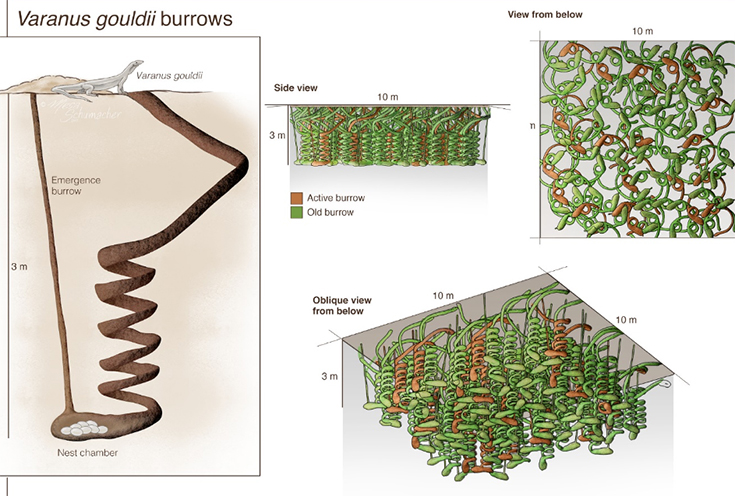 The timing of the research revealed clues as to why certain species utilized the warrens. For example, throughout the winter dry season, the researchers found hibernating frogs using the burrows to maintain their body moisture. During one excavation, Doody and his team discovered 418 individual frogs in a single warren.

“The finding is significant as it shows that nesting warrens provide critical shelter and other resources for the small animal community,” Doody said. “The invasive cane toad is decimating the monitor lizards in some areas, meaning that these nesting warrens, which are re-used year after year, will disappear. This can impact the relative number of predators and prey, which can have unexpected consequences for the ecosystem, such as an overabundance of one species at the cost of another, which in other systems has threatened species with local extinction.

The arrival of the toxic cane toad emphasized the extent of the monitor lizard’s impact on the food web. In studies conducted between 2009 and 2017, Doody’s research team uncovered abandoned burrows and an increase in the lizard’s prey, including smaller lizards, snakes, turtles and birds. Australian researchers and natural resource managers have been unable to successfully control cane toads.

Doody is now expanding his research to include the perentie, another large monitoring lizard that likely nests at great depths in the Australian desert, to see if it too should be deemed an ecological engineer. His team is also looking at how climate warming will impact the facilitation of these animal communities.