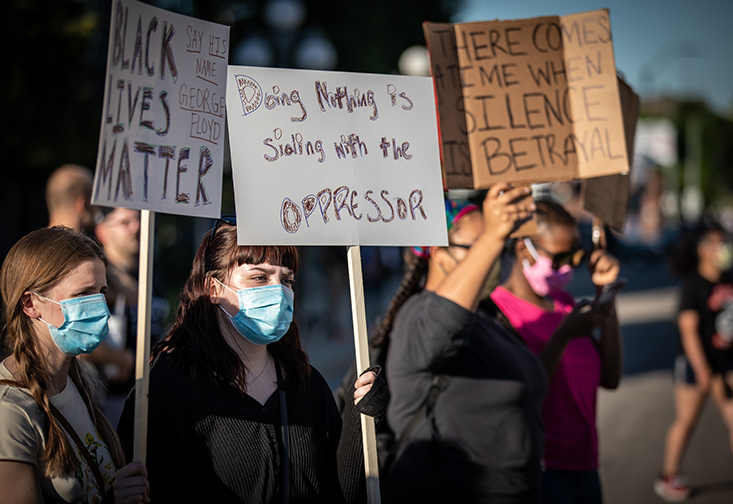 USF researchers have spent decades studying the many facets of racism. They’ve witnessed activists spark effective change, demonstrations lead to destruction and communities become wary of police. They’ve educated tens of thousands of students on significant moments of history and how such history tends to repeat itself. It’s a lesson playing out nationally in response to the death of George Floyd with protests erupting thousands of miles away from where he died in Minneapolis police custody.

Psychology Professor Edelyn Verona attended Sunday afternoon’s Black Lives Matter protest in East Tampa. She says it was a peaceful protest and in stark contrast to the looting and destruction that occurred the previous evening. Verona has published several studies on violence and its relation to experiences of threat. She’s found exposure to stress leads to aggression, especially in men, and the experience of stress can degrade self-control or promote impulse responses.

“The combination of recent stressors related to COVID-19 and a history of trauma that many in the black community have experienced, especially in regard to law enforcement, are making people more hypervigilant and on edge,” said Verona. “In that state, the threatening view of police in riot gear would trigger a defensive response and possible desire to retaliate, although that did not happen in the protests on Sunday.”

Bryanna Fox is an associate professor of criminology and has spent much of her career studying policing and crime prevention. She’s found military-style uniforms and equipment, such as M4 assault rifles, flashbang grenades and armored vehicles, can undermine civilian trust in police. In a study published this week in the “Journal of Research and Crime and Delinquency,” Fox and her colleagues found the more people trusted the police, the more likely they were to empower police, and be supportive of them using military weapons and tactics.

“Our findings underscore the need for police to cultivate trust in the community,” Fox said, “particularly as increases in trust were associated with increases in support for police, across people of all races and ethnicities.”

Criminology Professor Lorie Fridell is a top expert in the nation on biased policing. She has created the Fair and Impartial Policing training program that educates law enforcement on implicit biases and provides them with skills for producing impartial policing. She analyzes the killing of George Floyd in Minneapolis through the lens of what social psychologists label
“outgroup bias.”

“The ultimate outgroup bias is dehumanization,” reports Fridell. “The policing profession, unlike others, can lead officers to see members of certain groups as something other than ‘humans like them.’”

Fridell recently added a new training video to her Fair and Impartial Policing training program that addresses the issue of police being called to a scene by a community member who is frightened or uncomfortable because a person of color is wearing a protective COVID-19 mask.

James Unnever, professor of criminology at the USF Sarasota-Manatee campus, has written several books and published dozens of academic articles on how racism increases the likelihood that African Americans will engage in problematic behaviors, including crime.

“The relationship between racial discrimination and crime occurs even if African Americans vicariously perceive racial discrimination such as witnessing the murder of George Floyd and others,” Unnever said. “Racism is related to crime because it undermines the ability of African Americans to bond with conventional institutions, diminishes their self-control, and enhances their likelihood of experiencing crime-producing emotions such as anger and hostility. My research also suggests that criminal justice injustices are an especially crime-causing form of racism.”

“Historically, we repeatedly bear witness to black people's outrage against police violence as a catalyst for public protest. However, these protests have never been about police brutality alone,” said David Ponton III, assistant professor and historian of Africana studies. “Whether during the race riots of the World War I era, on college campuses in 1967 and 1968, after Rodney King's torture in 1999, following Mike Brown's death in 2014, or today in 2020, black Americans have expressed their grievances regarding the unequal distribution of economic and political resources and the ways policing works, institutionally, to sustain that unequal order.”

Additionally, Ponton emphasizes research that has found black Americans who are exposed to news about police killing an unarmed black person report high rates of poor mental health in the weeks and months following the news. He says this contributes to chronic stress, making them more susceptible to hypertension and its comorbidities, ultimately reducing the length of black lives.

The book, “The Color of Love,” by Elizabeth Hordge-Freeman, associate professor of sociology, exposes how one of the most pernicious consequences of racism and white supremacy is how black families feel compelled to prepare their children for racism.

“Black mothers’ fears lead them to limit their children’s behaviors and movements as an attempt to protect them from racial profiling,” said Hordge-Freeman. “Unable to change society’s anti-blackness, some may also try to modify their children’s racial appearance in ways that may, unfortunately, reinforce racial stigma and lead to painful experiences.”

In an effort to help create a discourse for anti-racism, the USF Libraries has established the Diversity and Inclusion Anti-Racist Reading List. It contains dozens of book recommendations that educate the community on the importance of overcoming racial tension and fighting injustices together.

The University of South Florida is committed to the Principles of Community, which reinforce inclusion, civility, open expression, evidence-based deliberations and vigorous debate. There are a number of resources available through the Office of Diversity, Inclusion and Equal Opportunity, the Center for Victim Advocacy, the Office of Multicultural Affairs and the USF Counseling Center.