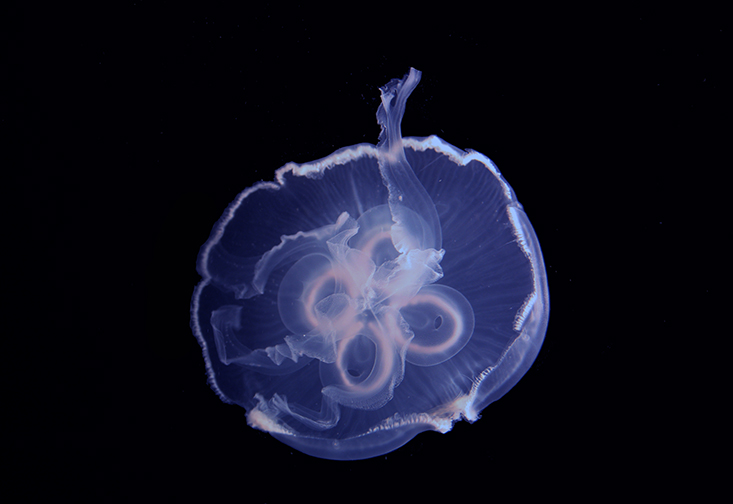 New research led by the University of South Florida has uncovered one of the reasons jellyfish have come to be known as the “world’s most efficient swimmer.” Brad Gemmell, associate professor of integrative biology, found jellyfish produce two vortex rings, which are donut-shaped bodies of fluid underneath their translucent bodies, that spin in opposite directions. They appear as jellyfish squeeze and reopen throughout each swim cycle, providing a “ground effect” force as if they were to be pushing off the seafloor.

The “ground effect” is most widely understood on airport runways. During take-off, air squeezes between the airplane and ground, which builds pressure and a force that boosts performance. Gemmell’s experiments have shown that jellyfish can use their two vortex rings in place of the ground. The vortex rings resist each other, creating a “virtual wall” that provides a similar boost in performance compared to animals that swim near the bottom. Never before has it been proven that an animal can create this phenomenon away from a solid boundary. 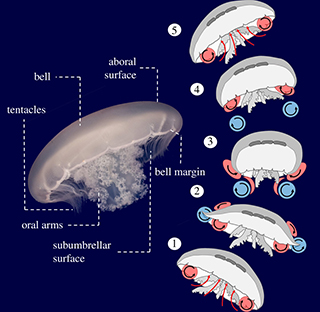 A diagram showing the anatomical features of a jellyfish and the vortex arrangement over the course of a swim cycle.

“The fact that these simple animals have figured out how to achieve a ‘ground effect’ type boost in open water, away from any solid surfaces, has the potential to open up a range of new possibilities for engineered vehicles to take advantage of this phenomenon,” Gemmell said.

In the study published in “Proceedings of the Royal Society B,” Gemmell captured the motion by recording the movements of eight jellyfish swimming in a glass filming vessel using a high-speed digital camera at 1,000 frames per second. He and his colleagues witnessed jellyfish that were in motion had a 41% increase in maximum swimming speed and a 61% increase in cumulative distance traveled per swimming cycle compared to those starting from rest.

Unlike locomotion by propellers, jellyfish do not produce cavitation bubbles and are silent, allowing them to move quietly through the water. The high efficiency of swimming also helps them store energy for growth and reproduction. Several research groups use jellyfish as a model for developing underwater vehicles that can be equipped with sensors that monitor the ocean without disruption. These new findings may enhance development of these technologies and further understanding of the ocean.