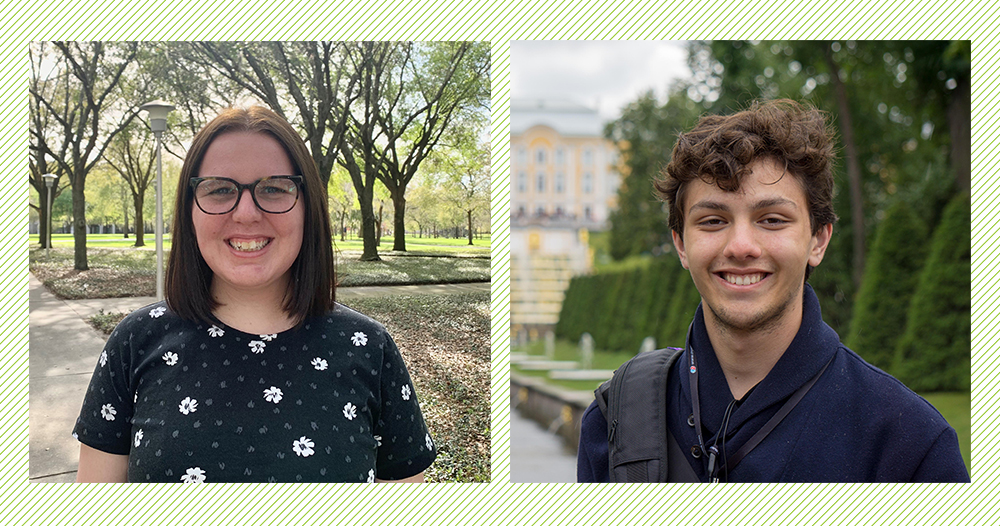 Two students in USF’s Judy Genshaft Honors College, Kelli Ann Lynch and Alexander Mercier, have been named 2021 Goldwater Scholars, chosen out of nearly 1,300 students nationally. The scholarship is the most prestigious undergraduate award in the country for scientific research, and provides each recipient with $7,500 for educational expenses and research support.

Both students have already completed research in their fields with positive implications for public health.

Lynch, a junior from Melbourne, Florida, majoring in physics, has spent three years researching with USF professor and computational physicist Inna Ponomareva. “We study the evolving properties of ferroelectrics (materials that exhibit spontaneous polarization, even without an electronic field present),” Lynch said. “When these materials are coupled with other mechanisms, such as mechanical stress or electric fields, and align through polarization, it allows us to use them in new ways, like powering a computer, for example.”

Lynch was able to take a further step with her research in 2020, when she received an REU (Research Experiences for Undergraduates) award from the National Science Foundation (NSF) to spend the summer conducting computation biophysics research with Lehigh University. “We analyzed the mechanics of protein folding,” Lynch said. “There are a number of diseases affected by malfunctions of protein folding and by better understanding this process, we can combat those diseases.”

She was awarded a second REU to spend this summer researching at the University of Notre Dame. “We will be studying the bridge between condensed matter and biophysics, and applying quantum physics to evolutionary biology, and vice versa,” she said. In addition, Lynch will continue her work with Lehigh; the team will soon begin collaborating with researchers at Kyoto University, in Japan, to further their work.

Also a junior, Mercier, from Irvine, California, is a dual major in microbiology and pure mathematics (with a minor in Russian). He finished his high school career by completing an associate degree in mathematics through dual enrollment at St. Petersburg College. At the time, he was debating between enrolling at USF or MIT, but scholarships and a discussion with USF’s Office of National Scholars (ONS) helped him decide. “I met with Dr. (Sayandeb) Basu, director of ONS, before I even started here as a student,” said Mercier. “Seeing his, and his staff’s, dedication to student success was the tipping point that helped me decide to enroll here.”

As soon as Mercier started on campus, Basu connected him with USF assistant professor and integrative biologist Andrew Kramer. “I’ve worked on two projects with Dr. Kramer,” Mercier said. “The first was to create a network model of disease spread in the contiguous United States. The second uses something called network sparsification to quickly identify the most important relationships in a network, using mathematics. The implications of this are vast and can allow us to run more disease simulations in a shorter time, as well as identify important relationships for disease spread, so we can take the best actions to stop it.”

While researching network sparsification, Mercier realized that while other studies had been done on the topic, there was no standard method of evaluation. He was awarded a 2020 REU to Santa Fe Institute to try to rectify that by working with well-known network scientist Cristopher Moore. “Public health officials could make policy decisions based on network sparsifiers, and it is important to have a set method for testing them,” Mercier said. “Dr. Moore and I created a new network metric to do just that, called epidemic edge importance.” The two have a paper about this work set for publication this summer (along with a colleague), and Mercier is listed as first author.

Both Lynch and Mercier worked with ONS and with Basu on their research goals and Goldwater applications. Lynch had previously worked with ONS on her successful Gilman Scholarship (a study abroad award for Pell Grant recipients) application, and was she was then encouraged by ONS to apply for the Goldwater award. “Dr. Basu helped me define who I am as a scientist and create a network with other researchers,” Lynch said. “The best part about this process, even better than winning the award, was finding out who I want to be as a physicist.”

Both awardees plan to pursue their doctorates and serve as university professors and researchers. Inspired by the mentorship she received at USF, Lynch plans to pay it forward to help diversify her field. “I want to serve as a mentor and help provide a platform for under-represented groups in STEM to be able to perform research at a university level,” she said.

Mercier, who witnessed a family member’s Lyme disease misdiagnosis due to misconceptions about the disease at the time, hopes that his work can help prevent such misdiagnoses in the future. “That experience spurred me to enter the study of disease-spread. I am particularly focused on better understanding the mathematical tools used to create medical knowledge so that we can use them in a responsible manner,” he said.

“At the University of South Florida, cutting-edge research is considered an essential component of our undergraduate student experience, providing opportunities for students to extend their curiosity to further develop high-demand career skills such as critical thinking, problem-solving, creativity and communication,” said Ralph C. Wilcox, USF provost and executive vice president. “Congratulations to Kelli Ann and Alexander for their accomplishments in advancing science and public health.”

The two award recipients bring USF’s Goldwater Scholar tally to 15. Previous scholars have gone on to earn other nationally competitive awards and study at internationally prominent institutions as they work on research projects.

The Barry M. Goldwater Scholarship and Excellence in Education Program was established by Congress in 1986 to honor Sen. Barry M. Goldwater, who served his country for 56 years as a soldier and statesman, including 30 years of service in the U.S. Senate. The purpose of the Foundation is to provide a continuing source of highly qualified scientists, mathematicians and engineers by awarding scholarships to college students who intend to pursue careers in these fields.