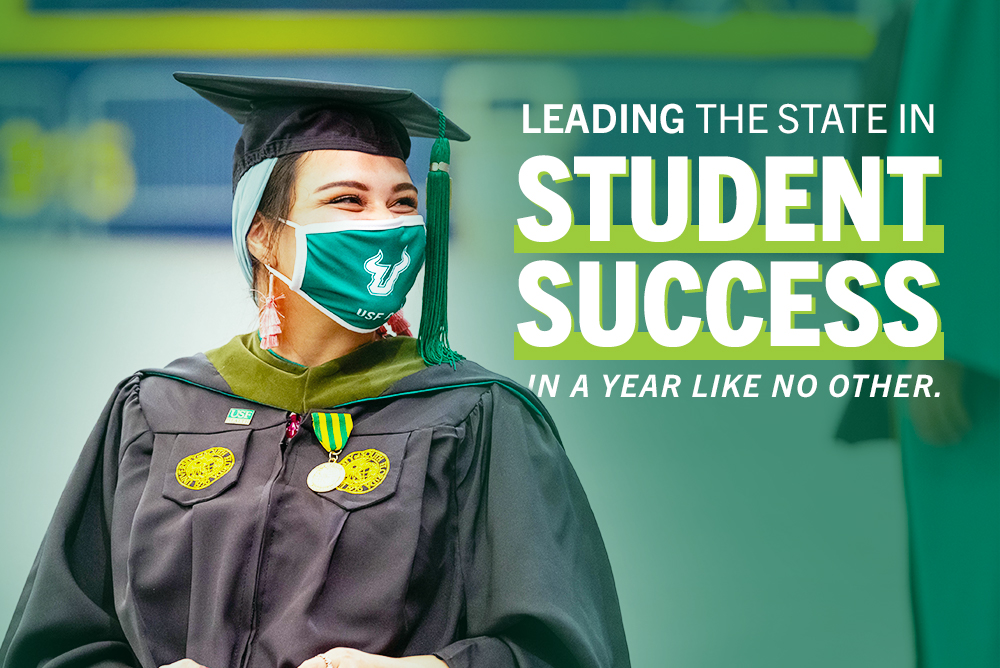 The University of South Florida is once again among the leaders in the State University System’s performance-based funding scores for 2021, according to data released today during a meeting of the Florida Board of Governors (BOG).

USF placed second out of 12 state universities in the model that measures each institution’s performance in a series of 11 student success-based metrics, earning 94 out of a possible 100 points. Since the state implemented the performance-based funding model in 2014, USF is the only university to finish in the top four every year. USF’s position includes the performance of the Tampa, St. Petersburg and Sarasota-Manatee campuses.

USF earned perfect scores for excellence in the following categories, according to the BOG’s formula:

“The University of South Florida is proud to be recognized for sustaining top scores in our state’s critical performance metrics, especially given the unprecedented challenges our university community successfully navigated throughout the global pandemic,” USF President Steven C. Currall said. “USF’s performance reflects our commitment – year after year – to position our students for lifelong success, beginning with graduating on time, with little debt, and skilled for high-wage, high-demand jobs in our state."

The state’s metrics are designed to focus on key performance indicators, such as affordable access, graduating students at a high rate, minimizing student debt and preparing students for high-skilled, high-paying jobs in high-demand fields. USF also performed particularly well in the newest metric, the two-year graduation rate for transfer students from the Florida College System, which reaffirms the university’s commitment to student access for success.

Board of Governors, MyUSF