Spend even a few minutes with Carol and Frank Morsani and it is impossible not to smile. They make each other laugh every few minutes, often cracking jokes back and forth, and then seamlessly transition into finishing the other’s sentences.

And when they talk about their commitment to the University of South Florida community, it is impossible not to be inspired.

The first time they saw USF’s campus back in the 1970s, it only had a handful of buildings. The Morsanis’ first gift to USF came in 1978, and their philanthropy has elevated programs across the enterprise, including the USF Health College of Medicine that bears their name. They continue to embrace the university because they see the energy and positive movement happening in every area, from health care and athletics to business education and arts appreciation.

They were key figures behind the formation of USF football in the 1990s, and the Bulls football team trains at the Frank Morsani Football Practice Complex that opened in 2011. In addition to the $5 million gift to support USF’s on-campus stadium announced at the Board of Trustees meeting in March, the Morsanis have pledged another $7 million to benefit students and others within the university community. Specifically, the gift will endow the Morsani Scholars, which will offer scholarships to USF students; create an endowed chair in geriatrics; and a directorship and professorship focused on ethical leadership in business.

“Frank and Carol Morsani have made an indelible mark on the University of South Florida and the entire Tampa Bay area through their incredible generosity and leadership,” said USF President Rhea Law. “Their imprint can be found throughout our university, our community and beyond. The impact they’ll make on our students and faculty through this gift is yet another part of the amazing story they continue to write.” 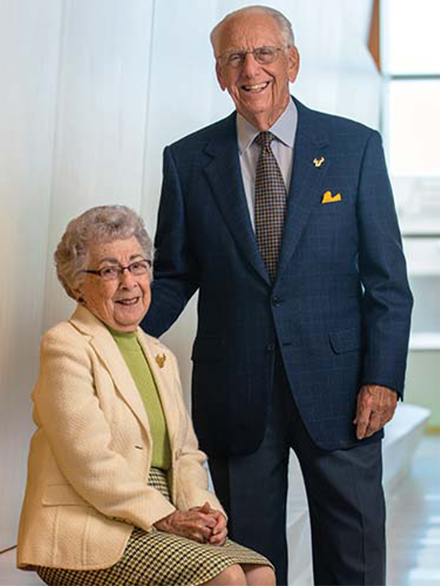 Both Carol and Frank grew up during the Great Depression. “I didn’t know philanthropy, I couldn’t even spell it,” Frank says with a laugh. “We just knew helping others. We were all poor. When you live in that environment, it affects you.”

“What I’ve learned (about philanthropy), I learned from Frank. He’s always been very generous,” Carol said, eliciting tears from her husband, which were quickly followed by a knowing look at his wife and a smile.

“Caring about others is a really important thing in our lives,” Frank said.

The focus on student scholarships is important to the couple as the cost, and value, of a college education has increased over time. Frank earned his degree with help from the GI Bill, and with financial support from Carol. “Give credit where credit is due!” she said with a smirk.

“It’s very difficult for a lot of students to participate and live the American Dream,” Frank said. “Change is the only constant we have. It’s through education, we can move and handle that change. We could think of no greater way to return the benefits we have earned over our lifetimes than to empower young people through education. The Morsani Scholars is an investment in deserving students to help ensure that no one willing to put in the work is left behind.”

Both Carol and Frank said that people often recognize their last name and then ask if they are related to the Morsanis whose names are on the medical school and other parts of USF’s campus.

“Yes. We’re it. They expect us to be dead!” Carol says with a laugh that in turn makes Frank chuckle. “People tell us about the medical school and the (USF Carol and Frank Morsani Center for Advanced Healthcare), about how fine the doctors and nurses are, as well as the facilities. We hear that over and over. These people every day tell us how they appreciate what we’ve done. And now people’s children are going to the medical school or business school and see our names. Making these things happen has been rewarding.”

“Carol and Frank have invested in our USF students, faculty and facilities in ways that are unmatched and so incredibly meaningful. Their 45 years of support for our university has been nothing short of transformative,” said USF Foundation CEO Jay Stroman. “Their investments consistently inspire other philanthropists, and I am grateful for everything they have done and continue to do for our USF community.”

Ask the Morsanis about their legacy of philanthropy and the answer is simple.

“A generous couple with their resources and leadership,” they said, smiling at each other. “That’s what we hope others would think about.”