Eric Eisenberg, who currently serves as the University of South Florida’s interim provost and executive vice president, has accepted a new position as senior vice president of university-community partnerships, USF President Rhea Law announced today.  In the new role, Eisenberg will use his 30 years of experience at USF and the strong ties he’s built within the Tampa Bay area to develop a cohesive and intentional strategy around the university’s community engagement activities.  The position aligns with a key strategic goal for USF to be a major social and economic engine through creating robust global, national and regional partnerships that help build a prosperous and sustainable future. 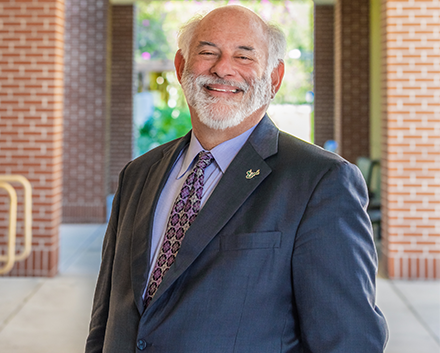 “In recent months it has become apparent to me that Dr. Eisenberg has a broad and unique skill set that will be exceptionally important as we seek to distinguish the University of South Florida as a model metropolitan research university,” Law said.  “His deep relationship with our communities -- including with businesses, nonprofits and governments -- and his far-reaching institutional knowledge show me that he’s well suited to step into this newly created role.”

Prior to becoming interim provost earlier this year, Eisenberg served as dean of USF’s College of Arts and Sciences since 2007. Eisenberg oversaw the university’s largest college with more than 700 faculty, 200 staff, 23 academic departments with 14 centers and institutes across all three campuses.  A longtime communication scholar, Eisenberg has partnered with numerous local public and private organizations throughout his career by advising them on strategic communication to improve organizational effectiveness.

“I am grateful to President Law for this exciting new opportunity to focus on how the University of South Florida can make an even greater impact in communities throughout the Tampa Bay region,” Eisenberg said. “While I am so proud of the tremendous accomplishments that I’ve witnessed and been a part of over the last 30 years, I am even more enthusiastic about what is to come: the opportunity to position USF as a transformational metropolitan university in full partnership with its communities.”

Law also announced today that in light of Eisenberg’s new role, she has decided to continue the provost search until the best possible fit with the right vision and experience is identified.  None of the candidates who participated in interviews and town hall meetings last month are still under consideration for the position.  Eisenberg will continue to serve as interim while the search for a new provost continues through the spring.