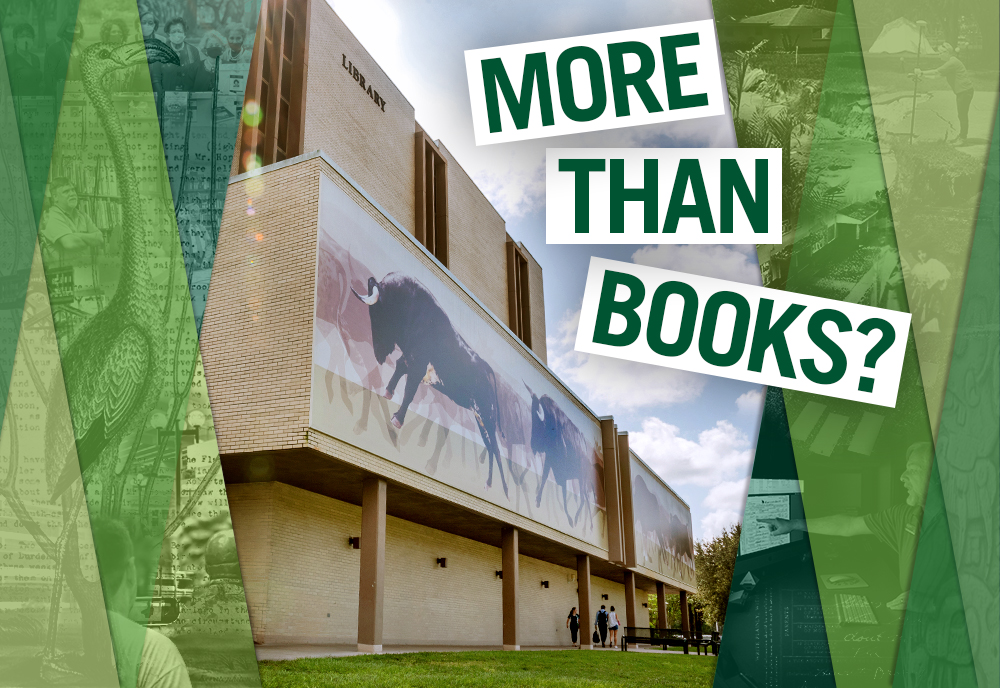 From solving century-old mysteries to changing what we know about Florida’s iconic bird, several resources at the USF Libraries have helped create actionable outcomes. 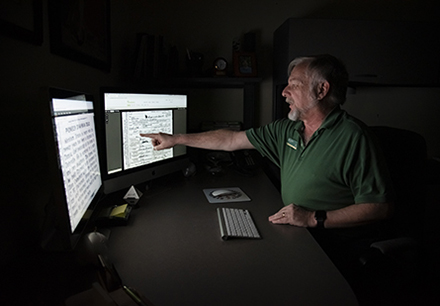 Drew Smith, associate librarian, reviews documents in an effort to trace the lineage of a man buried at Zion Cemetery in 1915.

Drew Smith, associate librarian for the USF Libraries, has played a significant role in helping bring closure to some of the families impacted by the disappearance of the century-old Zion Cemetery – the first African American cemetery in Tampa. In 2019, a Tampa Bay Times investigation uncovered that more than 800 unmarked graves were buried underneath several buildings, including the Robles Park Village public housing complex. Since then, Smith, a former president of the Florida Genealogical Society, has been working with the Florida Public Archaeology Network (FPAN) housed at USF to identify living next-of-kin.

Using census records, birth certificates, marriage records, obituaries, newspapers, and even Facebook, Smith and a team of volunteer genealogists are attempting to reconstruct the stories of the hundreds of individuals buried at Zion. Due to the extensive nature of the work, Smith expects the research to take several years.

“The Zion Cemetery research is the most meaningful genealogical work I’ve ever been involved with,” Smith said. “Even if we were to find only one living descendant, it would be worth it just to be able to tell that person that their ancestor has not been forgotten. The individuals buried at Zion led lives worth remembering and celebrating.”

Research at Zion Cemetery stretches across USF. It’s part of the interdisciplinary African American Burial Grounds & Remembering Project led by Department of Anthropology Chair Antoinette Jackson, who also recently launched the Black Cemetery Network, a nationwide effort to preserve Black cemeteries and history. USF librarians are currently building a digital exhibit to combine the oral histories, photographs, videos and archival information gathered by the project team. The USF Libraries already has a number of collections dedicated to Black history and dismantling systemic racism, and in 2020, compiled them to establish the African American Experience in Florida portal. It includes photos and stories of activism, narratives from former slaves and historical overviews of various aspects of Black life, such as in business, community and the arts.

DEBUNKING THE STATE’S STATUS ON FLAMINGOES 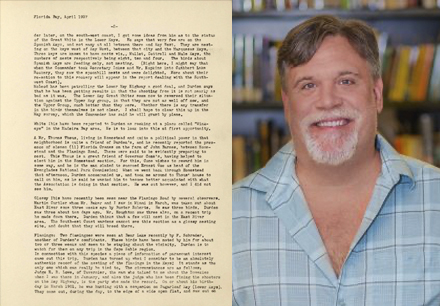 It was just last year that the state of Florida reclassified the flamingo as a native species and it’s all because of USF Special Collections acquiring a letter from 1937 that didn’t make it into the official record books. Up until that point, flamingoes were considered non-native escapees from captive populations, meaning they didn’t qualify for the same protection or rehabilitation efforts as native species.

Over the past few years, Audubon Florida has been working with the USF Libraries to preserve and hold their archives, one of which included a letter that provided a first-hand account of nesting flamingoes on Sugar Loaf Key in 1903. It was digitized for their Digital Collections, which can be explored through the Florida Environment and Natural History portal, a central repository for environmental and natural history data. This provided the state the information it needed to recognize flamingoes are in fact native species – a convincing piece of evidence that shows how powerful it is to have these materials digitally available.

“Had the materials not been conserved by the library and done in a way that was easy to find later, it never would have been known. How many other amazing stories and facts that we don’t know we need yet are buried in an attic in the Florida Keys or already in our library archives?” said Andy Huse, associate librarian in Special Collections.

Visitors to the portal can find other historical documents, such as rare maps from the 16th century, scientific illustrations from 1729 of the now-extinct Ivory-billed Woodpecker and photographs from the 1890s that share a glimpse of undisturbed natural habitats and frontier life of old Florida. The collection also stores the university’s extensive research on environmental disasters, such as the 2010 Deepwater Horizon oil spill and the 2021 leak at Piney Point fertilization plant. 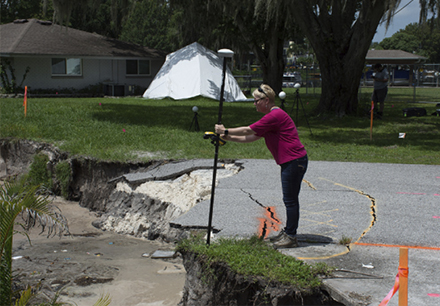 Lori Collins, research associate professor, and co-director of the DHHC, conducts 3D scans of a sinkhole.

Climate change, illicit trafficking and looting, natural catastrophes, war and conflict, over-visitation and development pressures can all cause irreversible damage to much of the world’s cultural and natural heritage sites. The Digital Heritage and Humanities Collections (DHHC) team has worked tirelessly at hundreds of heritage sites and museums locally, across the United States and internationally in places like Guatemala, Spain and Armenia. From the Moseley Homestead in Brandon to the Castillo de San Marcos in St. Augustine and all the way to the Quiriguá Archaeological Park and Ruins in Guatemala, the digitization is not just for the archives, but to ensure the accuracy of future restoration.

Their expertise has proven to be a valuable resource to museums and government agencies. In 2017, Pasco County officials collaborated with the DHHC to assist in their efforts responding to a massive sinkhole that swallowed two homes in Land O’Lakes. The team used 3D scanners to map the surface, sidewalls and the subsidence of the sinkhole and used drones to collect video and photos. They also reviewed survey maps of the area from 1847 to 1999, which showed the neighborhood was developed on top of a former lakebed.

“The technology we use is very good at documenting things very rapidly and in the moment, so we are able to respond quickly to emergencies,” Lori Collins, research associate professor, and co-director of the DHHC.

Thanks to the historical records of the area along with the documentation of the sinkhole before and after stabilization treatments, Collins speculates that they’ve created the most comprehensive coverage of a sinkhole for future researchers and educators. 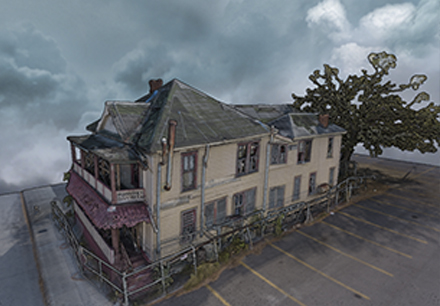 Interactive 3D model of the Jackson Rooming House incorporated as a site of noted significance within the Tampa Through Time archive project.

The DHHC is in the midst of creating Tampa Through Time, an ongoing project with the Tampa Bay History Center. It’s an immersive virtual presentation that allows visitors to explore Tampa from its early foundation through modern development.

“We have resources like oversized map collections, city directories and historical photos that will now be linked to locations, so researchers, students and heritage enthusiasts will be able to get a much more complete understanding of the Tampa Bay region,” said Todd Chavez, dean of the USF Libraries.

Some of the important and imperiled sites that have been digitally scanned and archived include the Jackson Rooming House, Perry Harvey Park and Central Avenue. Hundreds of other sites are being documented among cigar factories, Columbia Restaurant, Tampa Theatre and the Tampa Historic Courthouse.

“Heritage sites in Tampa offer an important look into our collective memory, but many of these sites, even those designated of local and national significance are at risk of disappearing,” Collins said. “We believe that by documenting these sites, we will help to not only preserve Tampa’s past before additional loss but will be able to share and create lasting records that will be archived by the USF Libraries for our community.”