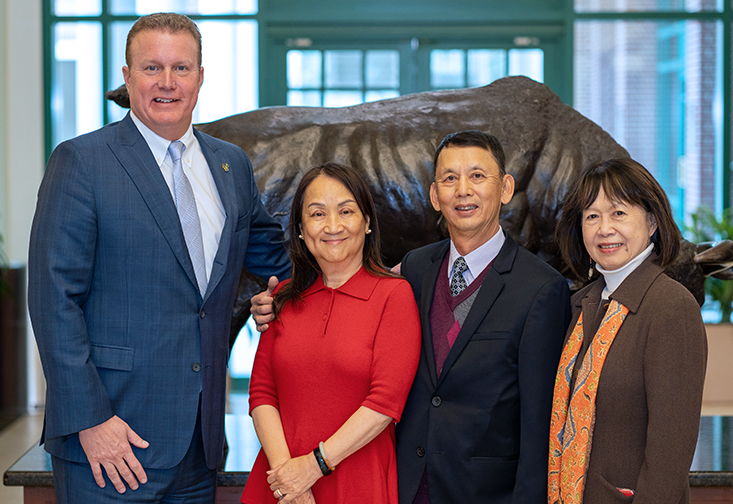 The University of South Florida today announced a $1 million gift from Connie and Tony Leung, founders of Sanwa Food Group, to establish the Leung Family Scholarships.

The gift, made through the USF Foundation, will support students who graduated from high schools in southern Hillsborough County, including the areas of Ruskin, Apollo Beach and Wimauma. Beginning with the 2022-2023 academic year, the scholarship will have a minimum of four recipients with annual awards of $10,000 each.

“We are grateful to the Leungs for their foresight and generosity in establishing this scholarship,” said USF President Rhea Law. “The Leung Family Scholarship will make the dream of a college education possible for students who may not otherwise be able to afford one.”

The Leungs were inspired to give back to the community that supported their business, Sanwa Food Group, which was founded in Ruskin in 1981.

At the time, the area was mostly farmland and Interstate 75 had yet to be completed. Today, it is one of the fastest-growing areas in the county.

“We did all our business for the first 30 years in south Hillsborough County, farming in the area,” said Tony Leung, who started out growing Chinese cabbages and melons. Sanwa has since grown and evolved into a regional food distribution company with warehouses in Tampa and Atlanta. “We wanted to give back to the area that invested in us.”

The Leungs particularly hope to help students from low-income and migrant families. Tony, one of eight children, was the first in his family to finish college.

Both of Connie Leung’s parents were educators, so it has always been important to her. “I think the best investment anybody can give to their children is education, not money,” she said.

This is the Leungs’ second USF scholarship. In 2009, they established the Leung Global Experience Scholarship, which they endowed in 2011 and then earmarked for students in the Muma College of Business in 2016. The scholarship subsidizes a study abroad experience, which is significant to the Leungs. Both natives of Hong Kong, the couple met while attending Guelph University in Ontario, Canada.

“Sanwa Food Group has grown alongside the University of South Florida in the Tampa Bay region,” said USF Foundation CEO Jay Stroman. “We are thankful to the Leungs for investing in the community — and especially the students in the community — they have called home all these years.”