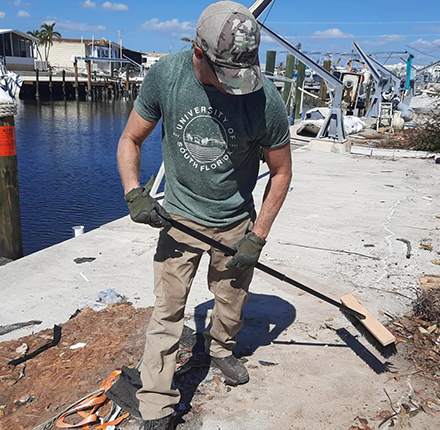 More than a month since Hurricane Ian made landfall, the need for help continues in southwest Florida. Ammon Bradford, president of the USF Student Veterans Association, just returned from his second trip to Lee County to bring relief supplies to the ravaged region. The Marine Corp veteran and graduate student studying digital journalism and design was joined by three USF student veterans.

They volunteered in homes that had black mold creeping in – removing cabinets, tables and damaged furniture, sweeping up broken glass and cutting through twisted metal to access other parts of the house. They worked alongside student veterans from Florida Gulf Coast University and the University of St. Augustine in cleanup efforts on Pine Island, a barrier island hit hard by 150 mph winds and storm surge that reached up to 15 feet high. 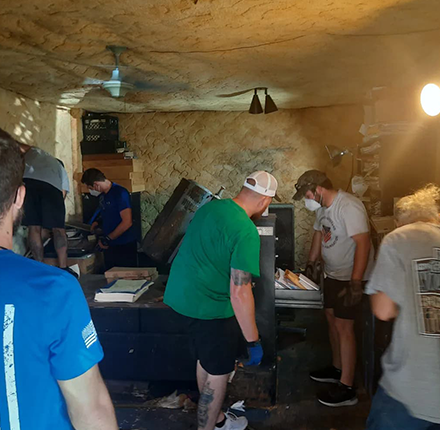 It was a somber experience for Bradford to witness the storm’s immense destruction. He said he also felt some hope – seeing so many others still helping people from Florida helping their own, student veterans from different schools collaborating – all with a shared purpose.

“To be able to help out in that way was rewarding,” Bradford said. “It didn’t feel like work, felt more like an opportunity to create some kind of change.”

Bradford previously traveled to Cape Coral a week after Ian made landfall with several USF students to drop off supplies that were collected through a relief drive in partnership with the local Student Veterans of America chapter. They drove boxes full of food, water, clothes and other essential supplies to the Veterans of Foreign Wars post and volunteered at the City First Church. 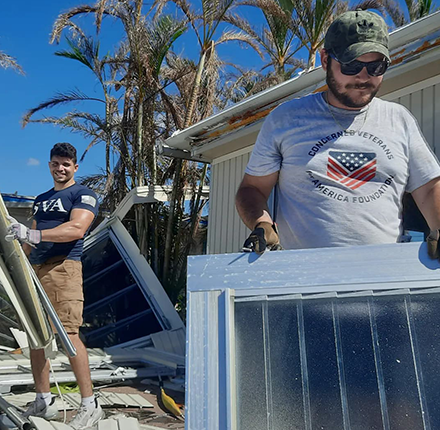 The students are just several members of the USF veteran and military-connected community to step up to serve after the disaster.

Prior to Hurricane Ian making landfall, a federal state of emergency was declared. That meant Army National Guard soldiers, such as Rianna McDonald, immediately packed up and deployed to prepare for extensive recovery efforts. This was the USF St. Petersburg campus student’s third deployment, with prior experiences at the Texas border and during the pandemic, where she helped start the first COVID-19 testing site in the south Florida town of Miramar.

McDonald spent several days in Lakeland as the storm passed, planning logistics and gathering supplies. She then deployed to Sebring.

Though inland flooding in the central Florida town wasn’t as extensive as what overtook interior communities such as Arcadia, nearly 90 percent of residents lost power and many had no running water. Roads were littered with downed trees and power lines. 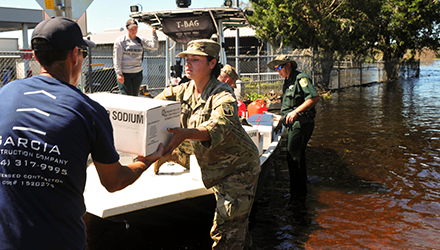 “We were prepared to conduct search and rescue efforts, but luckily it didn’t hit as badly as it could have in Sebring, so our mission changed to distributing supplies, with side deployments in nearby areas for search and rescue,” McDonald explained.

The National Guard set up a distribution site where residents of Sebring and nearby communities that experienced greater flooding, could pick up essentials to get through the trying days and weeks ahead. McDonald and her unit created an assembly line of relief, passing out water, food and ice to residents who walked or drove up – many still dazed from the experience. 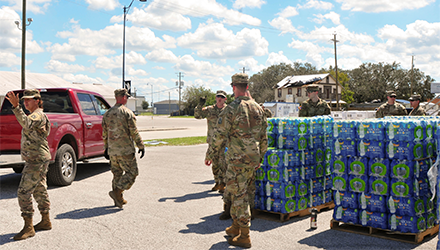 “The community was just really strong. People were coming together and thankful for the help from us and other first responders,” McDonald said. “To be in a situation like the many people we encountered were in is awful, but their spirits were up.”

While some members of the USF veteran community distributed food to those without power or in temporary shelters, others cooked it for them, such as USF alum Bryan Jacobs, a Marine Corps veteran and owner of the Liberty Smokehouse.

“In the Marine Corps, we’re ‘the first to fight.’ There’s something so powerful about those words. You’re the first to create the opportunities for others to thrive,” Jacobs said, who drove from Tampa to provide “hot, whole, fresh meals” to those hit the hardest by the Category 4 hurricane.

Years before as a student, Jacobs founded the Vets-2-Chefs program while at the USF Sarasota-Manatee campus, which helps struggling veterans find purpose by becoming chefs. Seeing how food and the culinary arts can change lives, including his, Jacobs envisioned the Liberty Smokehouse as a food truck that could provide disaster relief in the aftermath of storms like Hurricane Ian. 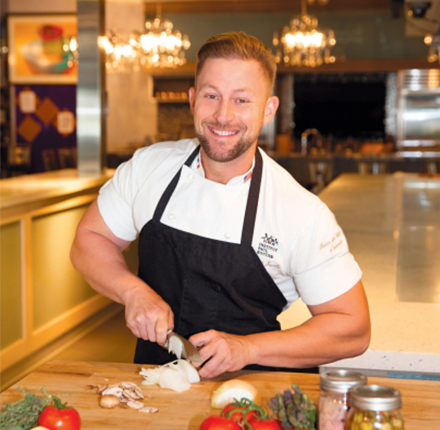 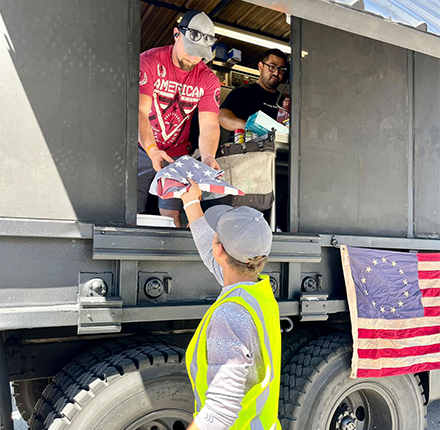 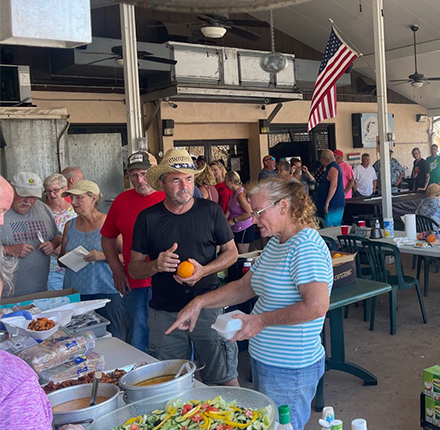 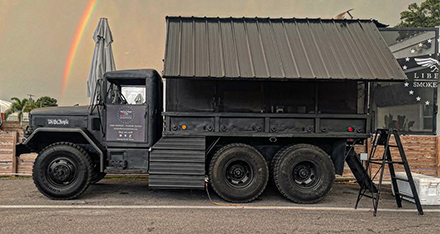 “There's a real gap in those first five to seven days right after a storm, where there’s no fresh food, no water, no community, no hope. You’re walking around like a zombie. And the big organizations don’t have the ability to move as fast as we do,” Jacobs said. “Our mission is and was to come in and bring people together at a strategic point and create hope one plate at a time. By coming together over food, it creates an opportunity to rebuild — not just physically, but emotionally as well.”

There are many ways the USF community can continue to support those impacted by Hurricane Ian and help in future emergency responses. Learn more and volunteer with USF’s Community Emergency Response Team.  You can assist students negatively impacted by Hurricane Ian through the USF United Support Fund. USF Health is also collecting donations to support on-site relief efforts.

Also, please join us in celebrating USF's Veterans on November 7-11, 2022. Check out the week's activities here.