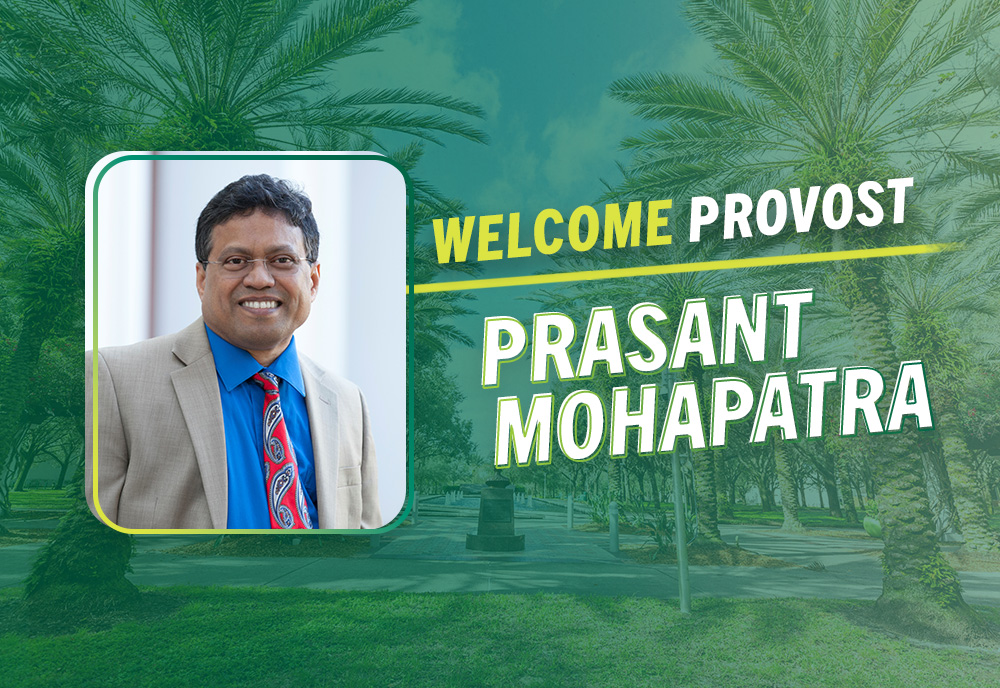 Mohapatra comes to USF from the University of California, Davis, where he has served as vice chancellor for research since 2018. A distinguished professor in the Department of Computer Science, Mohapatra has held multiple leadership positions at UC Davis, including dean and vice provost of graduate studies, associate chancellor, interim vice provost and chief information officer, and chair of the Department of Computer Science.

“I am excited to welcome Dr. Mohapatra to the University of South Florida family,” Law said.  “His extensive teaching, research and leadership experience will help build on our momentum and take USF to new heights of academic excellence.”

Mohapatra is a fellow of both the Institute of Electrical and Electronics Engineers and the American Association for the Advancement of Science. He is an accomplished researcher in the fields of wireless networks, mobile communications, cybersecurity and internet protocols, and he co-holds eight U.S. patents.

He has extensive experience in a variety of critical areas that align with USF’s strategic plan, including student success; faculty excellence; recruitment; diversity, equity and inclusion; and financial oversight and planning.

Mohapatra earned his doctorate in computer engineering from Pennsylvania State University, his master’s in mathematics from the University of Rhode Island and his bachelor’s in electrical engineering from the National Institute of Technology in India. He has also completed the Berkeley Executive Leadership Program through UC Berkeley and the Provost Leadership Development Program through UC Davis. Mohapatra’s complete CV is available here.

“I am honored to accept this role and to join the University of South Florida community,” Mohapatra said.  “As I learned about this opportunity, I became deeply impressed with how the university is transforming the lives of its students, addressing some of society’s most challenging issues through high-impact faculty research and serving the Tampa Bay region with its commitment to strong community partnerships.  USF is clearly an institution on the rise, and I look forward to helping us achieve our strategic goals and aspirations.”

Reporting to the president, the provost serves as the chief academic officer for USF, providing university-wide leadership for academic affairs.

“I’m proud of the work of our committee to lead such a thorough national search for USF’s next provost,” said John Ramil, chair of the search committee and former member of USF Board of Trustees. “Dr. Mohapatra brings significant experience and knowledge to USF as we advance toward our goal of becoming a top 25 public institution. I am confident that under Dr. Mohapatra’s leadership, USF will continue to reach new levels of academic excellence.”

Mohapatra will begin his appointment on March 1.  Law’s full message to the university community is available here.