Notebook: Hate is a Virus

The United States recently has seen a rise in attacks targeting the Asian community. While these attacks have been happening since the start of the pandemic, they are now receiving more coverage. An organization called Stop AAPI Hate reported on March 16 that there were 3,795 reported cases of anti-Asian hate crimes across the United States between March 19, 2020, and February 28, 2021.

Many of these anti-Asian hate crimes are happening specifically in communities with a high Asian-American population. On January 28, in San Francisco, an 84-year-old Thai man named Vichar Ratnapakdee was pushed to the ground and never regained his consciousness. On February 3, a 61-year-old Filipino man named Noel Quintana had his face slashed on a train in Brooklyn. On March 10, a 26-year-old Asian woman named Tiffany was attacked on a train, and witnesses reported her attacker yelled, “F-u, f-u Asian...” while grabbing her by the hair. On March 16, a man opened fire in multiple Asian massage spas in Georgia, killing eight people, including six Asian women. The list of similar reported cases continues, but the true scale of these attacks remains unknown, as they often go unreported.

As some of the most vulnerable members of the community, Asian elders are frequent targets of these attacks, and volunteers in Northern California have offered to escort elders around neighborhoods to ensure their safety. Fears surrounding future attacks have affected how Asian-Americans live their daily lives.

“These COVID quarantines really caught the United States off guard, and these deaths, mandates, and quarantines can definitely throw off people's stability, but the need to find a scapegoat, much less kill them, needs to stop. They are being verbally harassed, tackled, and literally having acid thrown on them, simply because they are Asian.…to attack our elders specifically because they are defenseless and are physically unable to fight back is simply cruel,” said Tee Chulikavit, vice president of Asian Students in America.

In response to the rise in hate crimes, rallies to spread awareness have taken place across the nation, including in Oakland, Los Angeles, Seattle and Washington, D.C. In a demonstration of support, USF President Steve Currall released a letter to the USF community on March 8, stating:

“...USF rejects racism, bullying, violence, prejudice and discrimination as they undermine the community we aspire to be. In summer 2020, we established an anti-racism initiative to bring more attention to racism and provide transparency in our efforts to eliminate it. The recent attacks against the Asian community are a reminder of the broad scope of racism and how our anti-racism efforts provide us with a valuable framework to address issues affecting all racial and ethnic groups. We value the contributions of our Asian faculty, staff and students to our community, and we are committed to supporting a safe and supportive environment for all…”

The letter also provided a list of resources such as how to report racial attacks and mental health services.

USF Asian organizations are also speaking out and taking action. Florida Asian American Student Union released a statement to encourage their communities to spread awareness and to educate their peers. USF Asian-affinity organizations such as Asian Students in America and the Vietnamese Student Association reposted the statement on their social media accounts in support of the message.

“I think that the recent hate crimes, especially towards the elderly in the Asian community, is both heart breaking and disgusting. It just goes to show that America has a deep-rooted problem with racism and xenophobia that we as a society have let it brew over for years. It really gives you a different perspective when it is your people that are being attacked for something they cannot control. While I am glad this is getting the media it deserves, I am deeply saddened that this has to happen in the first place,” VSA President John Doan said.

Other USF organizations such as USF’s NAACP have organized community discussions about the issue. The NAACP held an event dedicated to the topic as part of their “Elephant in the Room” series, during which they discussed anti-Asian racism in America, and Asian students also shared their opinions during the discussion. 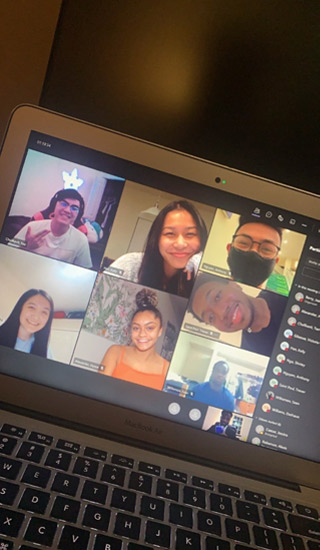 Participants in the USF NAACP chapter meeting on the “Elephant in the Room.”

“Solidarity is so crucial right now. Talking about which one of us has it worse will do nothing but hold all of us back. Racism is something as old as America, thus all of us minorities are affected by it,” said Jason Berry, president of the USF student chapter of the NAACP.

During the event, participants also discussed how their lives had changed since the start of the pandemic and how it affected them personally.

“I remember at the very beginning of the pandemic; my dad was always the one who went out to get groceries and was also working at the time because he owns a landscaping business. A lot of his clients that we thought were loyal to him, when he would go over to their houses, they’d say racial slurs, kick him off the property, simply because he was Asian … Emotionally, it is hard to hear that as his daughter and it’s hard because I am not able to do anything,” USF student Kelly Han said.

To show support to the Asian community, we encourage members of the USF community to spread awareness, uplift Asian voices by supporting Asian peers and report incidents of AAPI hate. A key action step is educating yourself, which you can do by following organizations committed to addressing this violence. These include Stop AAPI Hate, Hate is a Virus, Asian Americans Advancing Justice and National Council of Asian Pacific Americans.

On our campuses, you can consult the Counseling Center’s resources to support the Asian community and make sure to support USF Asian/Pacific Islander organizations as well. The Office of Diversity, Inclusion, and Equal Opportunity scheduled a townhall for March 25 to discuss violence against people of Asian descent, and to provide information regarding available resources within the campus and broader university community. Join the meeting on Microsoft teams at 2 p.m. on March 25.

Shirley Ngo is a freshman majoring in Health Science.

This story is the first in our Notebook series, which will feature news, reporting and resources on topics related to anti-racism, diversity, equity and inclusion affecting the USF community and beyond.