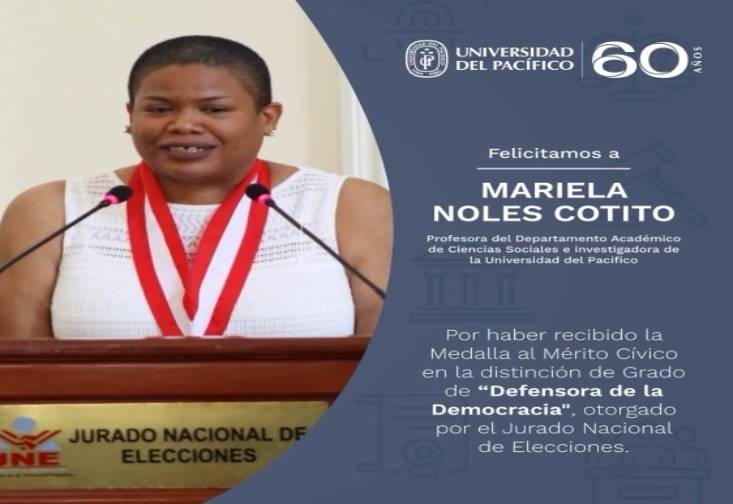 Mariela Noles Cotito was awarded the Civic Merit Medal by the National Tribunal of Elections in Peru, which also recognizes her as a “defender of democracy.” Mariela is a Professor of Political Science and of Discrimination and Public Policy at the Department of Social and Political Science at Universidad del Pacifico, in Lima, Peru. Her research agenda includes topics of gender equality, social inclusion policies in Peru, and how the intersection of different systems of oppression position different groups outside of the scope of legal protection in the country. She holds a Law degree from the Pontificia Universidad Catolica del Peru, an LLM from the University of Pennsylvania, and two MA degrees in Latin American Studies and Political Science from the University of South Florida. Concurrently, she has held positions within the Directorate-General for Gender Equality and Non-Discrimination in the Ministry of Women and Vulnerable Populations in Peru, as well as the Directorate of Public Policies for Peoples of African descent within the Ministry of Culture. Currently, she is the top advisor to the Office of Women and Equality of the Metropolitan Municipality of the City of Lima on issues of diversity and social inclusion.

During her time at USF, Mariela served as a graduate assistant for the Institute for the Study of Latin America and the Caribbean and supported ISLAC’s Afro-Descendants Working Group. Her 2018 USF MA thesis, "From Blacks to Afroperuvians: The Building Process of Black Political Subjectivity in Peru," focused on the factors shaping the emergence of Black identity and political subjectivity in Peru. After graduation, she has maintained her connection with faculty at USF. She is currently a consultant and co-investigator with Dr. Elizabeth Hordge-Freeman on a Blackness and Anti-Black Racism grant administered as part of the USF Understanding Blackness and Addressing Anti-Black Racism in our Local, National, and International Communities. The grant examines the impact of anti-racism engagement and leadership on the mental and physical well-being of Black academics, artists, activists across the Americas.