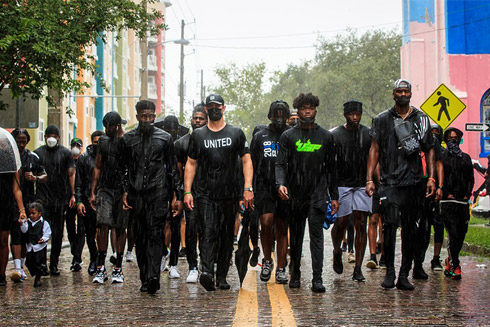 USF Athletics announced several new social justice initiatives, including the further development of an Inclusive Excellence Committee and the implementation of voting education and a voting holiday on Nov. 3.

Furthering its commitment to equality, social justice and unity, USF Athletics announces several new initiatives established in coordination with Bulls student-athletes and driven by a desire to continue to bring awareness and focus to the fight against racism and social injustice wherever it may occur.

KJ Sails walked silently through the rain with his 2-year-old son on his right, his head coach to his left and a crowd of people behind him. Sails, a cornerback at the University of South Florida, had organized this event on a recent Saturday. He grew up in Tampa and heard stories from his grandmother about how a police officer shot and killed an unarmed black teenager, prompting three days of riots in 1967.