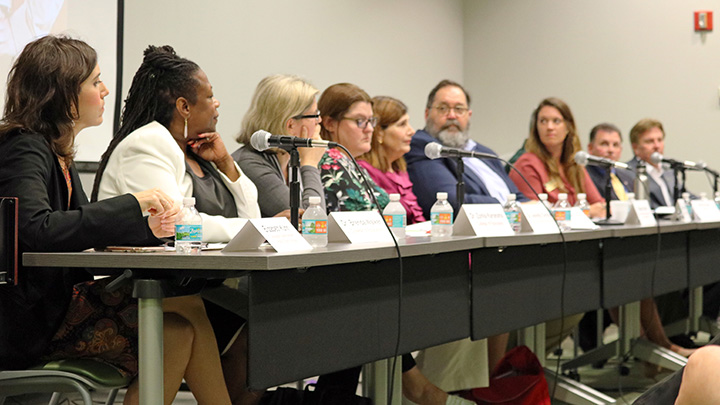 To respond to the ongoing conversation about violence in schools, USF experts joined together on Tuesday for a critical conversation about the passing of the Marjory Stoneman Douglas Public Safety Act and the idea of arming teachers.

TAMPA, Fla. (March 22, 2018) – As a special education teacher for more than 10 years, doctoral student Joy Broughton said it is the sense of community in schools, one that is spurred by the school’s teachers, that will be important in preventing future violence.

For Broughton, this starts at the elementary grade level.

“The prevention starts years before (with) knowing our students,” she said.

Broughton remembers having conversations where she and her colleagues discussed the possibility of a child growing up to become a source of violence in their school. In the suburban middle school she worked in, there was one student suspected of planning a school shooting.

“His journal was found, and (he) listed some students names in school and made some sketches that could be some kind of plan,” she said. “This incident was happening at the same time as I was dealing with a student in my classroom who was doing behaviors that disrupted my instruction and scared the other students in the classroom.”

Broughton said she worries about which students will be suspected, because the student who was suspected was not a viable threat. Instead, the other student, the one who was whispering things to other students that scared them in class, was the real concern.

Broughton was able to get that student into a supportive outside placement, but she said she’s seen other schools where those resources aren’t options. She said it’s important for teachers to know their students and work to create a community in their schools.

“Now school is the last community that we have, and we need to take advantage of it,” she said.

In the aftermath of school shootings such as Columbine, Sandy Hook, and Marjory Stoneman Douglas High School, the conversation of what to do about school violence has raged in the offices of politicians, within newsrooms and in the public.

To respond to this ongoing conversation, USF experts joined together on Tuesday to host a panel on school safety and to have a critical conversation about the passing of the Marjory Stoneman Douglas Public Safety Act and the idea of arming teachers.

During the panel, USF faculty, researchers, journalists, school district personnel and law enforcement officers discussed the new legislation and the implications it has for the ongoing debate surrounding school safety.

The Florida Senate passed a piece of gun legislation at the end of its session, titled the Marjory Stoneman Douglas High School Public Safety Act, for the Parkland school where 17 were killed in a mass shooting last month. The bill, which received $400 million in appropriations according to the Florida Senate website, establishes a variety of programs and regulations.

One area of the legislation for panelists focused on was the Coach Aaron Feis Guardian Program, which allows sheriffs offices to set up a program to train and arm certain members of the school community.

Dwayne Smith, Senior Vice Provost and Dean of the Office of Graduate Studies, said one of the exceptions to qualifying to be trained and armed under the program is one that cannot be a full-time instructional teacher. Those hired strictly to teach in a classroom would not be armed. The program requires 132 hours of training, 12 of those hours being in diversity training.

“America is awash with guns,” Smith said. “... As a consequence, the belief system is that you can get your hands on guns. Our schools are not sufficiently hardened to keep people out, so access can be gained relatively easily, and once inside, the shooters can go about their deadly business with virtually no opposition.”

By the time law enforcement are able to respond, the shooter has had time to carry out an attack. The logic behind this bill, Smith said, is that if there is someone on campus to combat the shooter immediately, the violence could possibly be avoided.

There was also a push for other solutions from the panel. Karen Liller, a professor in the College of Public Health who is an expert on the prevention and control of children’s unintentional injuries, said public health experts have no way of telling if the solutions proposed by the bill or the panel would work because there simply isn’t enough research on gun violence to see what works and what doesn’t.

“We don’t know because it’s been underfunded. It’s been totally under researched since 1996,” she said.

For Liller, the bill leaves too many blank spaces. She wants to know how the weapons will be stored, how this new liability for school districts will be insured and managed and what happens if a gun is stolen by a student.

“There are so many questions that are not answered and are not in that bill, and we don’t have the evidence to support these strategies,” Liller said.

What research has been done, she said, has shown that more guns equal more problems, and that there is public support for getting rid of assault weapons. She also said she feels when the focus is on the weapon, on who is being armed and who isn’t, conversation gets away from another question: Why is this happening?

“What happened to these children that are killing children?” Liller said.

While conversations around violence prevention and the implications of guns in schools raised important questions, panelists also discussed how other policies in schools can lead to challenges for school systems.

Brenda Walker, a professor of exceptional student education, said she wanted to speak for the voices pushed furthest down, those of the African American students in the educational system. Her particular concern is with the legacy of zero tolerance policies, which were created out of the Columbine school shooting, a shooting that was carried out by two white males.

Walker said typically low-income learners are those who bear the brunt of the consequences from zero tolerance policies and that racial discrepancies will spell more trouble in the future.

“In preparing for this (panel), I would say to parents, ‘What do you think … of arming school personnel?’ and many parents have said, ‘I tell you what, if that happens, my child won’t be there. I’m pulling my child out of school,’” she said.

The current situation made Walker think back to the case of Brown v. Board of Education, where the doctrine of separate but equal was struck down. She said she wonders if this fear has parents pulling their children out of schools, it would seem society has gone right back to square one.

To create change, it’s important for Americans to develop their media literacy skills and to make their voices heard at the ballot box, said journalism professor Wayne Garcia, an award-winning journalist who regularly covered state and national politics during his days as a reporter.

“I think we’re in a period where we’re going to have to have a generation of young people come up and understand media literacy and how important it is in their life,” Garcia said. “The fact that they have this torrent of information coming in, in their pocket, and what’s important to them and how they can solve problems with that is really going to be the key. My recommendation … is demand more from those two institutions (journalism and politics) and demand that the conversation is solution-based.”

Smith left the audience with one final note — to educate themselves on the new legislation and to understand what its implications mean for their local communities.

“Read the bill entirely and (you will) gain more understanding and even more complexities,” Smith said.