A state-of-the-art competition at the University of South Florida is bridging the gap between mind and machine. The 2019 USF Brain-Drone Race, scheduled for Saturday, Feb. 9, will feature teams from across USF as they race drones using brain-power.

USF Assistant Professor Marvin Andujar, PhD, Department of Computer Science and Engineering in the College of Engineering, is organizing the event. He led the University of Florida group that first started the competition in 2016.

“It’s been amazing to see how much interest there’s been in the field since our first Brain-Drone Race,” Andujar said. “For us, the racing is a way to introduce young people, students and others to this technology and hopefully spur more research into neuro-technologies.” 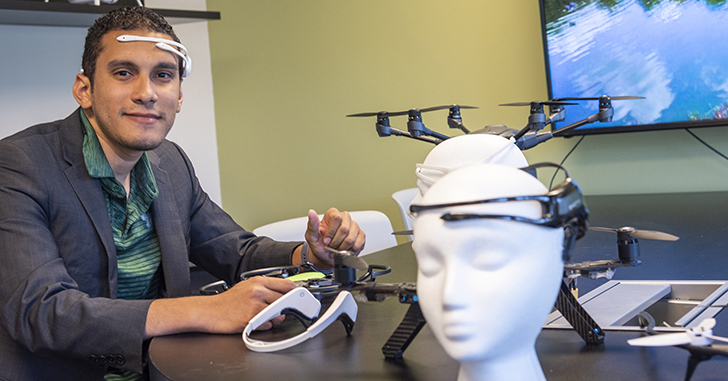 Marvin Andujar, PhD, Assistant Professor & Director of the Neuro-Machine Interaction research lab in the Department of Computer Science and Engineering at USF.

While the idea of piloting a drone with your mind may sound like science-fiction, it’s really just a combination of neuroscience and computer science. The underlying technology is part of a much larger field of study into brain-computer interfaces (BCI) – a term first coined in the 1970s. BCIs are devices that create a pathway between the brain and an external device, such as a drone, computer or prosthetic limb.

BCI technology reads the brain’s electrical signals to function. Every time we think about something or move a muscle, the neurons in our brain send electrical signals to one another. Through technological advances and the development of wearable electroencephalography (EEG) systems, scientists are able to detect and interpret these signals. By doing so, they can then translate the electrical signals into commands for external devices.

When applied to brain-drone racing, researchers link a specific brainwave pattern to forward movement in the drone. So, when the pilot, who is outfitted with an EEG headband, produces that pattern, the drone is signaled to move.

“When you imagine a movement, your brain produces the same electrical activity as if you were performing the movement with you muscles,” Andujar said. “For drone-racing, we have our pilots imagine they’re pushing an object forward. Then, we capture that signal, classify it and send the information to the drone, which has already been programmed to move when it receives that data.” 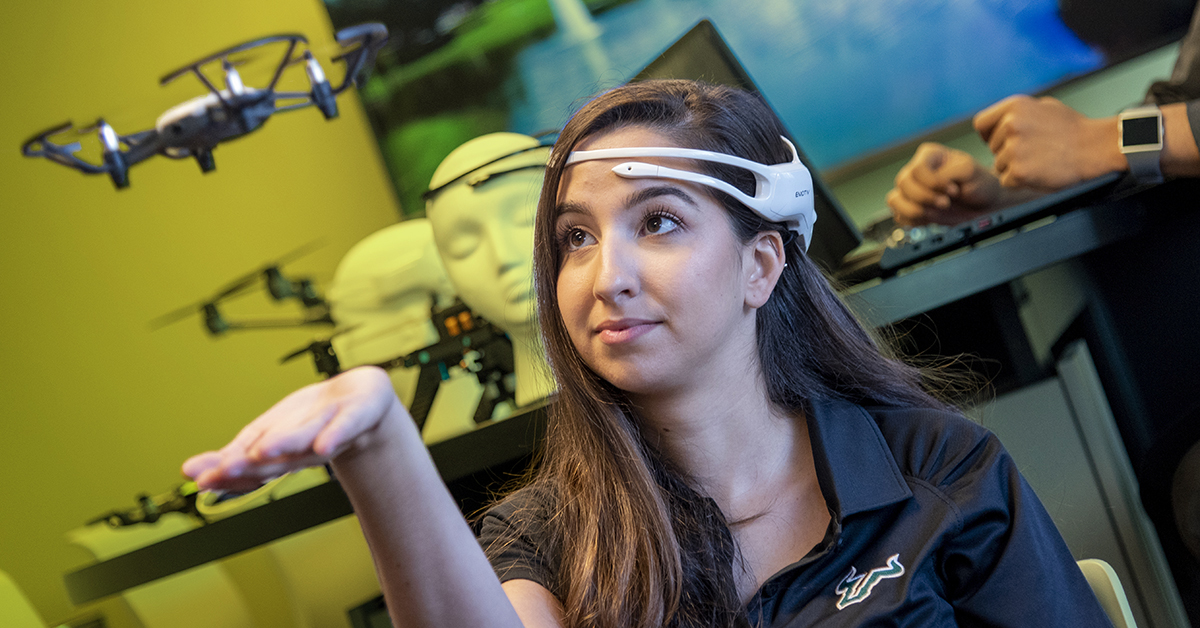 Sarah Garcia, a PhD student in Dr. Marvin Andujar's Neuro-Machine Interaction Lab, controls a drone with her mind. Garcia is wearing an EEG device that detects her brainwaves and signals the drone to move.

While brain-drone racing represents a piece of the innovative potential of BCIs, the technology is also being utilized in life-changing ways. BCIs have been in development for medical applications for decades. They can be used by patients to control prosthetic limbs and have even helped return partial sight to vision-impaired individuals. In people with ALS, a neurodegenerative disease that destroys nerve cells and causes disability, the technology is also being refined to provide communication and mobility assistance.

For Andujar and his research team, these medical advances act as motivation, pushing them to find new and unique ways of utilizing the technology within the medical field and beyond.

“From a computer science perspective, there is really an endless number of ways you can apply these systems,” he said. “You can use BCIs in a smart home to open and close doors with your brain. Or, have the environment adapt to you based on your brain activity. It’s pretty incredible to think about what’s possible when you combine biology and neuroscience with technology.”

The 2019 USF Brain-Drone Race is scheduled for Feb. 9. Doors will open at 12:30 p.m. at the Corral at the Yuengling Center. For more information and to reserve your ticket, visit their website. The event is free and open to the public.